What better way to break into the top six at last? The word from the Stadium of Light, whether it came from live commentary – what a boon for the exiled fan – and Sixer’s Sevens or match reports was as encouraging as it could be. 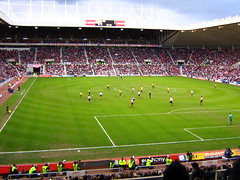 Here – yes, have another look – was a slick home performance when four goals somehow seemed a poor reward for the quality of play. The trick now, or course is not to get carried away………

Three points against Southend was the only way to start the most crucial run of games of the season so far. The next three will be a lot tougher: at Birmingham tomorrow night, entertaining Derby on Saturday and at the home of SuperKev, WBA, the week after.

The wish list can start at an ambitious nine points. But seven would be a great return, too, while anything else than five would seem a huge disappointment.

What also pleased me at the weekend, as someone who cannot for obvious reasons get to anything like as many games as he would like, was the size and sound of the crowd.

I said something in the region of 35,000 and noisy would be encouraging and that, give or take 1,400 souls, is what we got. The fans are gradually returning, a clear response to the style and passion Roy Keane has brought to the squad.

What was it my Celebrity Supporter interviewee Terry Deary said?

“Keane’s fast pass-and-move game is worth the entrance money and he is bringing in the exciting talent to play his way.”

With the boost from the size and manner of the Southend win, the second part of my modest dream – 40,000 plus against Derby – begins to look all the more likely to be realised.

If you are anywhere near Wearside this weekend and need a further incentive to make it to the ground, let Salut! Sunderland reveal its own minor contribution.

In response to the SAFC matchday programme’s request for tales of memorable journeys to and from games – the series is called Red and White Journeys – I have recalled one truly hellish episode.

It is due to appear in this Saturday’s programme and should bring tears (of rage) back to the eyes of fellow London branch members who endured the coach trip to, but more especially from, Old Trafford for the Millwall FA Cup semi-final.

Won’t spoil it by saying more.

But tomorrow’s visit to St Andrew’s happens to coincide with another matchday journey from hell – one that’s taken a year, since our Premiership game there last February, to reveal its full, painful nature.

But if you want to read about that you’ll have to go to Salut! Sunderland‘s parent blog.