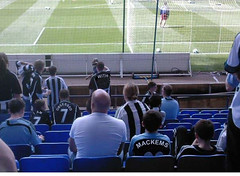 I’d have put it differently. But more of the same tomorrow, with a different cast, will have me walking on air again, and thinking of Big Jim, this time after watching the game on TV in Abu Dhabi. Ha’way the Lads.