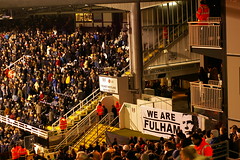 You’ve heard all about Londoners who’ve never seen a cow. Joe Jenkins*, a journalist (specialising in foreign news, not sport), gave every impression of being one who hadn’t encountered snow the day he ventured north to watch his beloved Fulham at the Stadium of Light. He lived to tell the tale of short-lived ecstasy…….

I don’t get to see Fulham play away all that often, so days out following the Cottagers on the road tend to stick in the mind (and not just because we always lose).

Some days stick out more so than others. Take April 8, 2006, for instance. It was my first (and only) visit to Sunderland. I should have seen it as a bad omen when I realised that I had lost my ticket for the first time ever before a game – and when I was just a few hundred yards from the Stadium of Light.

It was the day of the Grand National. And while the horses were sweating up at Aintree I was freezing my nads off. I don’t know if it is a common occurrence in the North East, but Sunderland was in the midst of a snow/ice/hail storm and it was damn cold.

Anyway, we retraced our steps to the metro and to my amazement, amid the slush in the winding road between the station and ground, there it was! My ticket. A minor miracle – and a pass to get into a game that was to last a whole 19 minutes.

We went one up courtesy of Brian McBride. The conditions were ridiculous – there was ice all over the park – but I felt that if the ref had decided to play the game in the first place then it would continue. Sadly not. Match abandoned.

We nipped back to the pub, ordered fish and chips and watched the National like any sensible person would have done in the first place.

You went down, we stayed up. But you beat us in the replay.

And now for your questions…(oh, and that’s me with a very young Claudia Winkleman at about the age I was first taken to Craven Cottage)

What did you think of our respective clubs’ prospects before the season started? Have the first few games altered your thoughts?

Fulham got off to a predictable start – losing on the road – as Hull claimed their first scalp of the season. But then we beat Arsenal at the Cottage and convincingly. Not such a surprise now that the Gunners have had a few ropey results but all the same, we looked tight, organised, easy on the ball. Staying up looked a breeze. Sadly we have looked lightweight ever since. Did I say a breeze?

Sunderland look a better prospect than last year, not least because you now have a former Fulham fave Steeeeeeeeed, who is a tidy, skilled player when he is not injured… You did well last year. Think you will finish at least slightly higher up the table this time round.

What thoughts spring to mind when Sunderland AFC are mentioned?

Friendly fans with a real passion for their club. A club where there is a tradition of free-flowing (and usually) attractive football. And, er, ice storms (see above).

When did you last see SAFC v Fulham home or away, and what happened? Any other memorable games between us?

Sadly I missed last season’s 3-1 defeat at the Cottage… Apart from the abandoned match at the SoL, the one that sticks out was our clash at the Cottage the same season. Everyone was beating you and then you turned up and within minutes Liam Lawrence had scored one of the best goals I’d seen by a visiting player, a thumping 20-yarder out of the blue. It was class. We got two back but all the same it was a fantastic goal scored by a team dogged by a lack of confidence.

How did we manage to beat you at Craven Cottage last season? Us being better than you expected or you playing so badly?

I missed the match, but to be honest it wasn’t a massive stretch for any team to beat us last season in the Sanchez/post-Sanchez period. You have to be doing something right to score three on the road but our season didn’t really start until the last few matches when we pulled off our great escape.

Apart from the snow, what sticks out in the memory from your visit to the Stadium of Light? What do you think of Sunderland itself? What memories, if any, do you have of Roker Park?

I was knocked out by the ground. I’ve been to the new Wembley since, so that has rather overtaken it in my estimation of what an impressive ground is. But you should be proud of a fine stadium.

What about the signings each club made this summer?

Keane has done well. I’ve mentioned Steed, and the other Fulham connection is Healy. He might not score a hatful but surely one Premiership manager is going to get him scoring regularly. I can’t help but liking Cisse’s enthusiasm. I think we’ve brought in even more players than Sanchez did last season, among them Andy Johnson, who has so far got sent off and not had a chance to shine due to injury. Zamora is playing well but not scoring. The fans’ favourite is Pantsil from West Ham, who has more personality than poise on the ball but gives his all.

Do you regard Chelsea much as we regard Newcastle? Or are you more grown-up about such things?

We hate Chelsea (that’s a lyric, not a challenge to the Stamford Bridge meatheads, you understand). I would only rank Millwall ahead of them for most unpleasant fans in British football. It’s a joke to talk about a real rivalry these days but it exists all the same for the older fans.

Memories of players and/or management linked to both clubs? Lee Clark, Paul Bracewell are obvious recent ones

Recent big takeovers, such as Man City and QPR make Fulham seem modestly endowed? What have the Fayed millions brought your club, and what do you make of the way the game is going?

Fayed’s dosh propelled us up the leagues, though it is often forgotten that the origin of our climb was the inspirational management of Micky Adams, who got us out of the bottom division by spending no more than about £25,000. Fayed sacked him and in came Butch Wilkins and a certain Mr Keegan.

Club vs country. Who wins for you, in football but also in the other sports you follow?

I only really follow football. I am Fulham ’til I die. I was at the England friendly against the Czech Republic and it was crap, but I will always shout for them in the big games. Bullard coming into the squad was a bonus but he didn’t even get on the bench and might not get another chance to score a Beckamesque free kick for his country.

Who will win? Score? Will you be there?

I’ll be there. I find it a tough one to predict but I have a hunch there will be a few goals. I’m just not sure who is going to score them. I reckon a score draw is a strong possibility.

* Joe Jenkins on Joe Jenkins:
My Dad (a Reading supporter) moved the family close to Putney Bridge in the 1950s and started taking my older brothers to Fulham games. When I popped up – the fifth of five sons – in the early 70s our family’s devotion to Fulham was at its zenith. The younger two of my four brothers – the Twins – would think nothing of Sunderland away midweek when they were teenage schoolboys in London. They went everywhere and took me to my first game at the Cottage – a reserve team match round about 1976 when I was four or so. We sat in the Stevenage Road stand (now renamed after Johnny Haynes) and Peter Mellor, our keeper who famously let in two slightly soft goals in the ’75 Cup Final we lost to West Ham, gave me his Fulham scarf. It is of course one of my most treasured possessions.

Not that there is any lingering resentment, but the entire family went to that Cup Final leaving me at home with the sitter. I was three, but all the same… I could recite the team thanks to my indoctrination by the Twins so they could at least have taken me along to a once in a lifetime experience!

My love for the club was cemented in the early 80s, watching Les Strong, Paul Parker, Ray Houghton, Gordon Davies and Leroy Rosenior punch above their weight. I then became a season ticket holder. But for a few bright moments these were dark days. Or years. In fact almost a decade. But then we played our best football for over 20 years. Remember that? The instigator was Jean Tigana. It was 2000-2001 and we stormed the Championship, beating a very good Blackburn into second place by 10 points and a hatful of goals despite Souness’s insistence that his was the better team. We were a class act and Louis Saha, Luis Boa Morte and Barry Hayles scored more than 70 goals between them in all competitions.

Our more recent history in the Premiership has been a bit of a let down. But we are still hanging in.

1 thought on “Who are you? we’re the Cottagers”