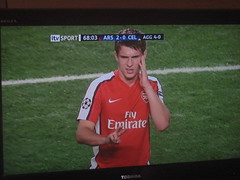 Cesc Fabregas did a lot a head-shaking during the long stoppage as medics dealt with the unfortunate Ramsey, and he complained on TV later about the lack of protection players received in the Premier League.

I do not equate his challenge last week on John Mensah with what happened tonight. Yet there appeared to be an element of revenge at the Emirates and even Gooners visiting this site have been critical of his actions; it is clear, in other words, that Fabregas himself is not above foul play.

Should Shawcross be dropped from the England squad so soon after his inclusion, as a mark of football’s desire to eliminate reckless conduct that has such serious consequences? That would probably be an appropriate response, yes. Should he be treated as a pariah because of his actions at Stoke City tonight? No.

Salut! Sunderland, or this part of it, hopes Arsenal go on to win the Premier League, not because of tonight but because of the style of football they play (not being Chelsea or Man Utd helps a bit, too, if we are frank).

But it also hopes they do so without unworthy accompanying soundbites from players or staff seeking to blacken the name of a player who is honest enough to know he made a dreadful mistake that threatens a fellow footballer’s career. I have seen the incident several times on YouTube – while not feeling it right to post the footage here – and have seen no trace of intent.

44 thoughts on “Sympathy for Aaron Ramsey”

Next Post
Fulham or Aberdeen: will the real Lily Allen stand up?