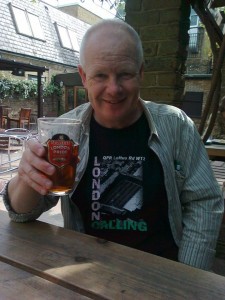 If you judged QPR by the price on the away ticket – £45, with scant concession for pensioners, for deeply unsatisfactory accommodation in a barely Championship-standard ground – you’d consign all concerned with the club to the neighbouring guest house of Wormwood Scrubs. Luckily, some of the supporters are fine and pleasant folk, as we see from the responses of Steve Colwell*, whose website beer.meister.co.uk is as much about beer as football … …

Results so far have been up and down. We’re entering a dangerous part of the season for promoted cliubs so are you worried or fairly confident?

I feel pretty confident as we’ve shown against Man City and Chelsea we can get, or nearly get, the 3 points, we’ll lose a few, but we keep going out to win, sadly outclassed by Liverpool, though, at least we get them at home next, and I feel we can beat anyone at Loftus Road.

What were your minimum and maximum expectations for the season, and the seasons to come, on gaining promotion?

Minimum was going straight back down, but we got rid of the F1 clowns, thank goodness, so now staying up is what I’m realistically hoping for, maximum, to be at least 14th and have a FA Cup run, not had one of those for years. Future, to gradually build on a good foundation.

Anton is clearly the key to your succcess! Who else is indispensable to your immediate needs, and who needs to be moved on or repalced in January?

Anton has been a great signing, and Young too. Heidar Helguson has proven to be our only forward who can play the lone striker role, and we’ve missed him either in that role or with another striker beside him. Consequently, we need someone else to replace him when he runs out of steam, he’s not our youngest player. We also need another defender or three.

Who are the greatest players you’ve seen – or wished you’d seen – in the QPR hoops and who should hjave been allowed nowhere near them?

For QPR, has to have been Marsh, Bowles, Francis, Phil Parkes, and Sir Les Ferdinand, of course. I’d have loved Thierry Henry to play for us. I remember Marsh headbutting ‘Chopper’ Harris in a friendly, and getting away with it (though he was taken off), never let Harris near a QPR player, it used to be a lot rougher in those days!

And what have been your highs and lows as a supporter?

Highs, most recently, has to be the promotion as champions 2010-2011, match-wise that season, walking all over Sheffield United 3-0 in Sheffield early in the season, that was when I realised we could go up. Low, getting beaten by Cardiff in Cardiff, in the play-off final 2003, late winner in extra time when we’d dominated the 120 minutes, life!

Confession time: I’ve spent a lot of my life in west London and my younger daughter played for QPR Ladies. What’s your secret Sunderland connection?

Like it! Hard to say I have one really, I do follow a Mackem on twitter, and she (Katie) follows me. Also, remember my namesake, Steve Caldwell, scoring a last gasp equaliser for you up at your place on 14th August 2004, 2-2 draw… I enjoyed the match up to then, and felt guilty I’d scored against us… I mean my namesake had…

And hand on heart, the bottom three?

Should be Wigan, Blackburn and Wolves, all three deserve relegation, but I’d love it to include Stoke, sadly won’t, and Bolton who may just replace one of those three.

If our clubs missed out on both top and bottom, where will we each finish?

I don’t think either of us will be in the top half, so probably 14th/15th or vice versa.

The Barton Question (sorry, Steve: it predates his arrival at Loftus Road). And it was the Eduardo Question so that covers feigning injury and diving, but what form of cheating most annoys you and how would you stamp it out?

Pulling shirts at corners really annoys me, why has it been allowed to happen? Of course I agree with those you mention, they should be stamped out too.

Name one step QPR or the football authorities could take to improve the ordinary supporter’s experience of the game.

Cap salaries/players prices, too much money goes to the divas and divers which should be spent on our facilities and to keep entry prices lower.

We’re all part of the same process, to different degrees, but is the money-fuelled Man City success story – and QPR resurgence AND Sunderland purchasing power – good for the game or the beginning of the end?

Thinking about the previous question, we all do need to bring in money to have a hope of competing with each other, let alone with the big boys. We’ll never see a Forest win the league, or QPR runners up by a single point again, unless we do have the money to spend or the authorities start levelling the playing field again. Metaphors or what? Good for us, for now, but bad for the long-term, seems to be what I’m saying.

I shall be there and we tend to draw too much at home. I think QPR should win 3-1, but wouldn’t be surprised to see a 1-1 draw, at least I wouldn’t put money on anything other than a draw.

Me, I’ve supported QPR for 40 years, seen a few changes over that time, and visited a few away grounds. I love going to away matches and my website, and the blog a mate set up to enhance it, were direct results of finding places to eat and drink when away from home, it’s for ale drinkers really, so not for the chanting crews. Now, I’m semi-retired, write a bit (in the middle of my first blockbuster – lol), edit my site as a hobby, and work part-time as a carer. Basically, I need more money to fund more football and pub visiting … all the best, may we both prosper in the Premier League and cheers m’dears!

4 thoughts on “QPR v SAFC Who are You?: ‘pay divas and divers less’”