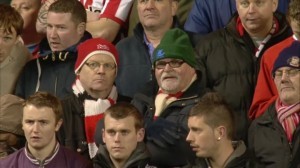 Readers were asked to suggest what Pete Sixsmith, in the much-seen image from Molineux, was saying or thinking at Sunderland slumped to defeat. The invitation produced a sprinkling of replies, but only one winner …

Here’s something to gladden the hearts and remove all anxiety: a Salut! Sunderland competition result.

It would be grand if we could offer holidays in the sun, bumper cash prizes or eternal life. But if those are all, for now, beyond our means, we can still offer a Philosophy Football t-shirt, albeit one left over from another little competition. 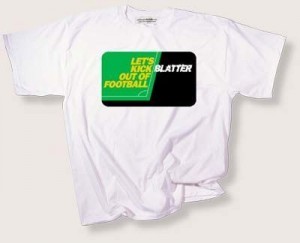 It captures the spirit of fair-minded reaction to the accident-prone Fifa boss Sepp Blatter’s crass and clumsy thoughts on racism in football (along the lines of “a friendly hand shake should solve it”).

And the shirt goes to Ken Gambles, Sunderland supporter and occasional Salut! contributor, for his suggestion for what it was Mr Sixsmith, famous for his seven-word matchday verdicts (Sixer’s Sevens), was saying or thinking the moment cameras caught him as he watched Sunderland surrender a winning position at Wolves.

Posting as KG, Ken may have been lip (or mind) reading:

Who needs 7 words? One is enough to describe this.

Thanks to one and all who entered, here and at our Facebook page. Ken, oddly enough, seemed disappointed – that word again – to learn the prize was not a Salut! Sunderland mug.

So he’ll be pleased to hear that the little corner shop run by this site is still happy to take orders for mugs, t-shirts, bags and other goodies. Just click on this link and then scroll down until you find something you fancy.

1 thought on “That Molineux sulk: the winner is …”

Next Post
Martin’s Musings: full marks for effort at Spurs, but we’re goal-shy