Far too early to be starting to think about SAFC v Manchester City on Sunday afternoon? Not if you’re the Bluemoon site where they’re already running an interview with our own Pete Sixsmith. He began his shopping list of City players he’d welcome at the Stadium of Light with the Italian striker but, realising the list would never end, settled for Adam Johnson.

Last week, the Everton “Who are You?” feature attracted more comments from City supporters than Toffee men and Mackems combined (one of the Evertonians taking part in the questionnaire had said he’d “gladly consider my feelings about being a fan” if ever his club went City’s way; cue derision and cries of hypocrisy from Eastlands way).

Ric Turner, from BlueMoon-mcfc.co.uk, managed to pose a series of questions and get a set of answers containing not a single reference to Everton. Oops, spoke too soon: they are mentioned, in passing.

Bluemoon: Ahead of our clash at the Stadium of Light on New Year’s Day, Bluemoon caught up with Peter Sixsmith from Salut! Sunderland to get the lowdown on our opponents. First off, who are Sunderland’s key players?

Pete: It could well be your former keeper, Keiren Westwood when we play you. He has done well since leaving City and considering a career as a police officer. Another Kieran with Manchester connections, Richardson of that ilk, has had a steady season. Connor Wickham has done well since his return from injury – but he’s injured again. Our wretched league position suggests that our key players are not performing at all well.

Were you happy with the business conducted during the transfer window?

On the surface, it seemed ok, but when we considered it carefully, it wasn’t that brilliant: a couple of United players in decline, a child from Ipswich and another from Korea and a pair of ticky-over midfielders. The problems that needed addressing weren’t (a left back and a left winger) and that is a major reason for the departure of Steve Bruce.

What are your expectations for this season?

At the moment, to get away from the relegation area. If, by the time you roll into town, we have taken points from QPR and Everton (we took four, as we now know – ed), we will be on our way to doing that. We are looking for a top half place – one above Newcastle would do.

Are you happy with the manager?

When Bruce went (right move at the right time), I was torn between Martin O’Neill and Mark Hughes – heart v head. O’Neill presses all the right buttons on Wearside and has improved every club he has been involved with, apart from Norwich City. He is a thinker and has a sound pedigree as a manager. Bruce was a decent guy who almost got us going, but ultimately failed because he tried to emulate a red faced Scottish manager.

Are there any rising stars in the squad that we might not have heard of?

James McClean was Bruce’s last signing. He is a winger from Derry City and has created a very positive impression. Being a total anorak, I watch the Reserves and he has looked good. He altered the game against Blackburn and did ok at Spurs against Kyle Walker. Whether he can take on Micah Richards remains to be seen. Wes Brown is a player you may not have heard much of … 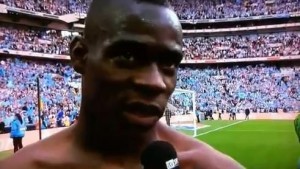 Image: Praguegallagher
If you could have any City player in your team who would you choose?

What a bloody awful question!!! I would take any one of them. Balotelli because life would be fun with him in the team, Silva because he is almost the perfect player, Kompany because he is such a composed defender, Yaya Toure because he is the nearest thing I have seen to the proverbial brick outhouse. If you pushed me, I would go for Adam Johnson because he is a local lad.

What is your perception of City as a club?

When I heard about the takeover, my immediate reaction was that it would be fascinating to see how City screw this up. They haven’t and they seem to be handling the situation well, particularly since they parted with Gary Cook. I always enjoyed Stuart Hall’s description of Maine Road as the “Theatre of Base Comedy” and City have given us all plenty to chuckle about over the years. But you are what I term, a “proper club” a bit like us and Everton who have sat in the shadows of crass and showy clubs for far too long. You have broken out of that mould now and I see you as a club who could dominate for years. The Arab owners seem to be doing things the right way compared with the Glazers, Ashleys and Abramovichs of this world.

Likely Sunderland starting XI for the game, and score prediction?

I would play Westwood and 10 brickies to build a wall in front of our goal. Failing that, it will probably be:

And the score prediction? 3-1, whichever way you want.

* Salut! Sunderland’s Man City “Who are You?” will appear here tomorrow …

1 thought on “The Man City build-up kicks off: ‘can we have Balotelli please?’”

Next Post
The Beautiful Game: Spurs top, Stoke and Wolves bottom with us