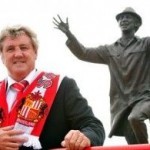 A penny for Steve Bruce’s thoughts? Given the probable size of our former manager’s pay-off, and the likelihood that discretion on his part was one of its conditions, a penny would not go very far.

But it is tempting all the same to imagine what must be going through his head as he reflects on his own demise as Sunderland manager and watches the exuberance and renewed hope that have accompanied the earliest days of the Martin O’Neill era.

Someone whose ear is generally close to the ground has heard that Bruce feels bitter and has been sounding off to members of his social circle about Sunderland AFC and some of the players he left behind when the axe fell.

Of course he may feel let down by his former employers, having been praised so highly throughout his reign right up to a few weeks before the decision for a change was taken, and by his team. Five-and-a-half years after The Daily Telegraph booted me out, ending a period of employment 12 times longer than Bruce lasted at the SoL, there are people I would still cheerfully boil in oil. Bruce will learn to move on, just as people have done after being ditched in more mundane circumstances from common-or-garden jobs in factories, offices and public services.

Up to now, though, it is inevitable that he will have looked at any Sunderland win and said, or thought: “That was my team!” Players he bought have shone and scored; two of them. McClean and Sessegnon, are attracting rave reviews outside the North East.

He will have looked at the defeats, under MON, at White Hart Lane and Stamford Bridge and run a licked thumb down his lapel in memory of the same two games producing four points last season. He will recall that the season ended not only with a decent 10th place in the Premier, just as the owner had required, but an unbeaten record in London (someone will know if and when that was last achieved by Sunderland in the top flight). Some say he was lucky with results elsewhere towards the season’s close; as I keep replying, they wouldn’t have been charitable about his “rotten luck” had all those injuries, and a different combination of results, made it a 13th or 14th finish.

But any tendency on Bruce’s part to dwell on his achievements, and life’s unfairness, would be pointless. The decision to sack him was also inevitable. He was not fired by SAFC for being a Geordie any more than I was dumped by the Telegraph for not being a Tory. Football managers are not employed to look back on past glories (or, in Bruce’s case, respectable survival and progress); they are judged by results and Bruce was damned by the very poor ones his team was producing.

Yes, he left the makings of a useful Premier outfit. But he showed insufficient ability to deploy his players effectively and motivate them to play with self-belief. No tribal anti-Maggery was to blame for that. Martin O’Neill has transformed the way supporters approach games; we now look forward to them instead of expecting to be either bored rigid or frightened to death. That is not because he has always been fond of our club but a result of the players, whoever brought them to Wearside, going about their jobs with a zest that would lift anyone’s game. Furthermore, he is demonstrably better able to organise the squad and make the right decisions when mid-match changes are required.

Anyone with half a footballing brain knows that Sunderland’s disappointing results between the end of January last year up to Bruce’s departure at the end of November, and the impact they had on team confidence, had a great deal to do with the absence of recognised strikers in the squad.

As I wrote in a piece published here on Christmas Day, a year that had begun so full of hope, a 3-0 win against Blackburn Rovers taking us back up to sixth place, deteriorated in large measure because the three scorers that day – Bent, Welbeck and Gyan – were all gone by August, without adequate replacement.

Bruce later called the decision to let Bent go a calculated gamble, and we might have accepted the business logic of the deal had he – or the club – not piled up the odds against Sunderland’s own interests by failing to bring in another striker. Welbeck’s nasty injury occurred before, not after Bent’s transfer to Villa so reliance on him to fill the gap was misplaced to say the least. And Gyan, for all his gifts, was hardly a prolific scorer capable of emulating what Bent had done so well. Later, Wickham and Ji were highly promising acquisitions but if Bruce does not know you need more than promise in the Premier, he is perhaps not suited to that level.

All of which leaves Martin O’Neill with a glaring need to sign someone, in the current transfer window, from whom goals can reasonably be expected. Bendtner, as has been pointed out by others, is neither as good as he thinks nor as bad as his detractors insist, but he shows little sign of being the answer to our lack of firepower. Finding someone up to the task is a tall order but I hope we will not end up having to make do with what we already have until the summer.

One day, Steve Bruce may feel free enough to tell us what really happened during his managership, in particular with regard to the sale-without-replacement of Bent. Was that forced on him? Was Gyan offloaded to the Arabian desert, again without proper replacement, against the manager’s will? Was he denied a free hand in trying to bring in new attackers just as he was reportedly prevented from addressing left-sided creativity problems by meeting N’Zogbia’s pay demands?

And if he cannot bring himself to tell all to Salut! Sunderland, then maybe he should dress it up as fiction and spill the beans in a sequel to Sweeper!, Defender! and Striker!, his series of novels about Steve Barnes, fictional football boss.

* Image: The View from the Press Box

16 thoughts on “Bruce, bitterness and moving on”

Next Post
Sweeney’s Cut: how Martin O’Neill is eliminating cynicism