It is time again for our glance at the week gone by. But let us look forward a little as well.

Go back a few days and we find an ultimately satisfying win, achieved against a well-organised Swansea side courtesy our discipline, finishing brilliance and, it must be said, the opponents’ lack of punch.

More of that in a moment. But first, looking forward just a day, the FA Cup 4th round tie against Boro is – if we can now rely on mid-table or better in the league – of crucial importance in terms of the progress and ambition of Sunderland AFC.

Steve Bruce seemed to many of us to be so worried about what might happen in the Premier that he paid insufficient heed to cup games. Look no further than the abject performances at home to Notts County last season and at Brighton this, the latter aggravated by the disgraceful decision to start without a recognised striker.

Sunderland AFC needs a big cup run. To reach the final again for the first time in 20 years, and all of 39 years since we last won the FA Cup, would given a massive fillip to the great but long-suffering band of supporters. It would persuade still more top players that we were a club worth playing for. Provided we are always careful in our approach to leagues games, advancement in the cup should be seen as win-win.

But first we have to overcome Middlesbrough, whose stuttering season in the Championship may well matter for nothing at the Stadium of Light. They will raise their game; we will need to be sharp and focused on victory.

And this was how two prominent supporters of Boro saw it, in absorbing “Who are You?” interviews:

But I said we’d return to the 2-0 win over Swansea. It inspired three strong pieces at Salut! Sunderland:

And expert analysis from the incomparable Pete Sixsmith, high on his Soapbox: https://safc.blog/2012/01/soapbox-slick-swansea-sent-packing/

Go to the home page – https://safc.blog – and, after bookmarking it and buying tons of merchandise (very well, one mug), you can explore all else that has been popping up here in the past week and, indeed, in the past.

Visit the Salut! Sunderland Shop and buy the new Martin O’Neill “Team of All Talents” mug … click this sentence.

And here, mine having arrived today, it is: 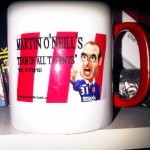 But we end this review of the week on a sombre note.

Ian Laws was a “top, top bloke” and also a passionate Sunderland supporter who enjoyed a fine spell as part of the SAFC reporting team at the Sunderland Echo. At the terribly young age of 41, he died suddenly on Thursday evening, apparently having suffered a heart attack.

Coming so soon after the death of George “Podgy” Summerside, it was another piece of awful news to be brought to me in recent weeks by Martin Emmerson, a great friend to both (as well as to me).

And, as he would have wanted us to say, Ha’way the Lads against the Boro.

Next Post
Martin O’Neill is no mug, but his mug’s on ours