Can it really be true? Is there seriously a Spanish music mogul by the name of Jordi Bastard? Our own Rob Hutchinson is convinced of it and searches high and low on the French Riviera, Somerset Maugham’s sunny place for shady people ..

Well, Cannes in fact, especially every January when 12,000 music industry rats from around the world descend pied piper-like on the chic French town for a five day Trade Fair of meetings, relationship building, networking, conferences, and planning for a successful year ahead.

In reality, and invariably, we talk a bit of shop, eat and drink in the town’s best restaurants and retreat to the Irish bars and watch/talk football over €10 pints of Guinness, and at the end of it all, reassure the boss that it’s essential that we all come again next year.

Over 20 years I’ve seen enough. Realworld’s Black Swan Effect were great nouveau boys last year, The Neil Cowley Trio ripped it up a few years ago. Best set I’ve seem was in the late 1990s when spoof Yorkshire club act Star Turn did a quick 30 minute cabaret set made up of a meat draw (complete with leg of lamb), a quick bingo game for the audience (rigged so that on No 44 everyone completed their cards and excitedly stood up and shouted HO– — USE at the same time), and rounded off with their seminal cover of Technotronic’s Pump up the Jam, which was re-branded Pump up the Bitter. Lovely. Wholesome.


Football is a common theme around the world which bonds us all, and it’s a great opportunity to show your colours with pride in meetings, whether it be the pin badge, folder crest, blackberry screen saver, or full blown Reg Vardy 2005 replica; football is a bond in our industry. I see the same people ever year.

A barman. I don’t know his name, he doesn’t know mine but he knows me as “Sunderland”. He speaks no English but we understand enough to know when our teams are doing well or badly. After eight years of this, I gave him a replica shirt a few years ago. Sadly he’s left for a better paid gig I guess as I’ve not seem him for a while, but I bet when English results come on his French TV, he thinks of SAFC.

My Portuguese mate (Porto season ticket holder)will not meet me if I wear the stripes as they are just a bit too close to his deadly rivals Benfica.

A meeting with an Argentine company I’d never met before came to fruition when he discovered the mighty Julio Arca played for us, and the bond across the water was sealed.

Eight years later, and business is still strong, although I need a word with him about a certain Mr Angeleri I believe.

Two years ago, a meeting with the biggest music & book chain in Mexico was flagging badly. The language barrier was difficult, and they were a notoriously challenging company to deal with. Towards the end, pointing to my crest I explained that we were just signing two local players Cristian Riveros and Paulo da Silva and were they any good? Eyes lit up, I-phones opened, video clips shown, and accompanied by hand gestures and lots of laughter. Five minutes later we had a deal, which is still solid today. Their buyer in Mexico City turned out to be a massive West Ham fan (don’t ask me why), so a match programme and a replica shirt ensures I am not Crushed by the Wheels of Industry (Heaven 17, circa 1983) and on we go. To cap it off, I ‘m having dinner with a Seagulls fan tonight; and he’s paying!

There’s another Mackem who attends every year – Joe. 60 something, we’ve never done any business ever but every year we grab five minutes to talk The Lads. There’s also one mag who’s always here. An English one, Dave, who lives in Sweden. During the McCarthy years, he’d send me orders by email. At first I’d excitedly open the attachment, only to find the weekend’s league table inside, and nothing else apart from a few expletives. When Christmas came I’d get my own back, when sending him his festive requests for jars of Marmite and packets of suet, I’d send him tins of cat food instead of baked beans and take the labels off. Oh the joys. But these are not the gems I seek, for this person is a man of legend.

My search this year is for a Toon icon. In the 1980s the movie Porkys brought us Mike Hunt. And action: waitress calls across restaurant “Has anyone seen Mike Hunt??”. Later, the wonderful 12th Man brought us Richard Benaud’s famous 1999 vintage Chateau Verderfloor. Whilst humorous, they are no more than make believe. In 2012, I’m looking for a genuine geordie bastard.

Joe, like me, has known of him for ages. In our industry he is well known amongst the Brits for his name alone and is probably not aware of his infamy, as he works for a relatively obscure Spanish company. I’ve been aware of him for some 15 years, and frankly Jordi, it’s high time we met.

I had a small break between meetings just 30 minutes, and I had to move quickly so that the window of opportunity did not become the corridor of uncertainty. Stand number, check. Blackberry for photo opportunity (battery currently on red at just 10%)with ID badge, check. Colours, check. Two escalators later and I find the busy Spanish stand. The stand hostess must have come from hire-a-hostess.com. A stunning blonde Barbie Girl (Aqua, Denmark circa 1997), all lips and hips, squeezed into a size four t-shirt and belt-cum mini skirt with a ‘come to bed’ smile available at all times. “Hi, can I help you today sir?”. Probably I thought, but then focusing on the task in hand, it was time. Cue a scene from New Statesman . . . . “Is Mr Bastard available please?” I mumbled. “I’m sorry? Just a second sir.” She eased off her hostess stool, careful to avoid breaking a heel, nail or glossy smile, and glided off around the corner. Heart pounding, excuse at the ready to make contact with him, a middle aged man approached me. “Hello can I help you?”

“Si aah no, Jordi was unwell and did not travel to Cannes this year, I am Luis his colleague, can I help you?”

The b*****d. Never trust a Mag, for they will always let you down. Just like Monty Python and the Holy Grail, my quest was brought to an abrupt end, and I made my excuses and left the stand. So near, yet so far.

Next year mate, I will get you, next year. 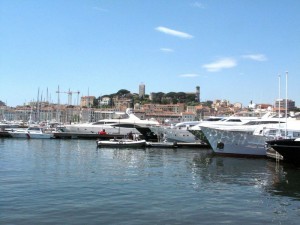 9 thoughts on “Sunderland, Newcastle and Cannes: in search of a man with a funny name”