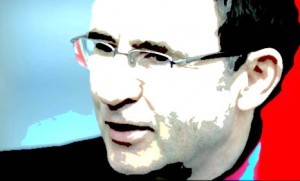 It is a quiet Tuesday. Valentine’s Day and all that, so M Salut is taking Mme Salut to the theatre tonight to see Crazy For You, which promises to be better than coming joint bottom in a pub quiz last night.

Mind the questions were heavy on Arnold Schwarzenegger and Lara Croft, and delivered through a dodgy microphone in incomprehensible Antipodean tones, so maybe there was an excuse. Menstrual became minstrel, I cannot even remember how ejaculation came out (as it were). Funny questions, you’re thinking, but not really; the context was innocent.

And when I think of it, everyone who didn’t come joint bottom could have put forward the same excuse for not finishing even further ahead of me than they did.

So why not stop beating about the bush and admit that we cannot be bothered with Tevez and the bumped-up claims that he was “treated like a dog” by Mancini (the headline suggests it was systematic abuse; he’s talking about one night)? Thierry Henry is to be thanked for praising Sunderland supporters, but that’s a bit of a one-line gag. And it’ll be tomorrow before we start getting excited about the cup game. 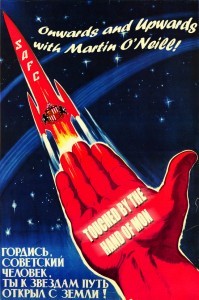 Instead, we can just show off a bit more of Jake’s art.

Jake is a Sunderland nut who now lives in north-western Spain, lucky lad. He passes himself off as an amateur but his work has done wonders in enlivening these pages.

In common with many exiles, he enjoys access to live televised Sunderland games that would be the envy of any supporter who lived the UK, couldn’t get to the Stadium of Light and avoided pubs and computer screens with dodgy streams.

So, like me when I lived in Abu Dhabi, he probably sees more Sunderland action as it happens since he was a lad on the Fulwell or Roker End. 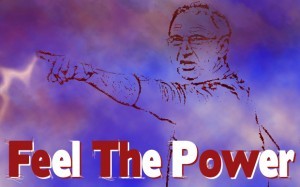 But the fact is that Salut! Sunderland is not only deeply grateful to Jake – who may one day emerge from behind the nom de guerre and tell us all who is really is – but is delighted to showcase more from his recent portfolio of work. There’s more to see and more to come before Gyan’s agent starts hawking him around the other sites.

His head will be in the clouds at a second appreciation here in just four days but he will realise Salut! Sunderland is run in such a haphazard fashion that he may wait a year for the next one. 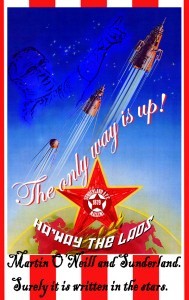 For now, join me in toasting Jake the Graphical Wizard. And buy one of the mugs he helped design; his commission so far wouldn’t buy a pint in some pubs I know.

Next Post
Arsenal, PSG and the unsettling of Sessegnon