Well done to the Reserves for drawing 3-3 against a strong-sounding Liverpool side. Adam Reed and, with a cracker of a shot by all accounts, Craig Lynch accounted for two of our goals, the third being recorded as an own goal.

But is it because we’re playing Arsenal twice in a week that things otherwise seem so uneventful that Salut! Sunderland is about to go off-piste again and talk about food? Maybe.

There’s an excellent Gooner’s Q&A lined up for tomorrow, when normal service resumes. And I am certainly hoping we see them off this time so that I am not forced to seek out yet another Arsenal “Who are You?” candidate for a replay.

Any Gooner straying here today and feeling up to the intellectual challenge – see how others have done it this season and last by clicking on any of these names: Tom Watt, Owen Amos and Clemency Burton-Hill – is invited to declare him/herself if it does end in a draw on Saturday evening.

So on to another priceless delicacy. We’ve had pies and steak and kidney pudding , and recently appalled some readers by eulogising andouillettes (French sausages made from the pig’s colon: see the great debate here). Now it is the turn of leek broth, with much mention of pancakes, too. 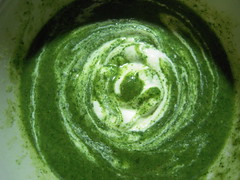 We all eat so regard it as a public service if I now let my friends, most but not all exiled Mackems, at the indispensable Blackcats list take up the story:

If I had to choose a last meal it would be a toss-up between my mum’s leek
broth with suet dumplings or an Entrecote steak at the “Le Relais de Venise”
in Paris on a good night.

I don’t suppose you have her recipe, Mike? My scotch broth recipe is my mam’s adapted to incorporate Marmite instead of Oxo when I used to be a vegetarian) but the kids aren’t as keen on it as the missus and me. Yet they love leeks, so I reckon a decent Mam’s Leek Broth recipe might do the trick,

However I do know that it involved boiling up ham or bacon bones overnight
to make the basis of the broth – my dad’s job was to skim the scum off the
top when he got back in from the pub. In the morning she put in carrots,
onions and leeks and then 20 minutes or so before serving, the suet
dumplings. She always started it on a Thursday night ready for Friday dinner time, but
it was best at Saturday dinner time when it had thickened up a treat. We
always put in a spoonful of curry powder on the Saturday for an extra spicy
treat.

I’ve tried making it since she died but always ended up with wallpaper paste; I guess I put in too many leeks too early.

Sadly we also lost her recipe for pancakes as well. She used to make these
amazing pancakes that were crispy and golden on the outside but soft and
gorgeous but not at all floury in the middle – cooked in lard of course. One
was filling, two was stuffed and three was gut-busting either served with
golden syrup, which we called treacle or better still sugar and lemon juice
– happy days.

To get Pancakes that are crispy on the outside and fluffy in the
middle, use water instead of milk for the batter mix. That’s how my
gran used to do it – a trick developed during WWII apparently. 1 egg
(powdered), 4oz flour, water, salt. Then you put plenty of mix into a
very hot pan (using lard of course). Same for Yorkshire puds in
t’oven.

There is no such recipe as such other than the boiling of the ham
bones which is a necessity. I made a vegetable broth recently (without
ham or bones etc) and it was remarkably similar apart from the obvious
absence of meat. I am going to do it again with the ham and bones
because I was surprised by how similar the taste was. I am sure this
would be a replica of my Mam’s broth. You could stand your spoon up in
it.

I got a couple of leeks, some swede and a soup mix (which has lentils
peas and a variety of dried pulses in a bag). Chopped the leeks and
swede and a couple of spuds really small. (My Mam would put parsnip in
her broth as well, but I didn’t have any. Next time I would include
the parsnips).

I put the whole lot, leeks, swede and spuds (which I would leave out
next time) into a slow cooker with a half pint or thereabouts of
water. Added some turkey stock in the absence of the ham bones and put
in on for 8 hours overnight. It was pretty good, but I realised that
the ham would have really made a lot of difference.

Easy to make and a good winter’s meal. Cheap as chips and makes a
whole big batch in one go. Can be frozen for later. It’s worth a go.

I make my own broth and it’s always good. You can’t get the ham bones like
you used to, and buying a ham shank (oo-err) can sometimes be expensive, so
I use Knorr ham stock cubes and they provide a more than adequate
substitute. If you want bits of meat in it you can always use the cheapest
“cooking bacon” (throwaway bits).,

While the stock and water are boiling (1 knorr cube per approx 3/4 pint)
you put in some pearly barley and yellow split peas – because these take
the longest to cook/soften. You can also add red lentils (which are smaller
than split peas, so don’t take as long). It’s the split peas/lentils which
provide the thickening, so you don’t need potatoes and it’s much healthier
and tastier.

Add swede & carrots in decent sized chunks (or else they’ll boil away) and
onion and turn down heat to simmering, whilst stirring all the time and
removing the scum. The leeks are the last to go in, because they take the
least cooking, but you’re still looking at a good hour of simmering with
the lid on. Add suet dumplings (twice as much flour as suet, plus water)
for the last 20-30 mins.

As has been said, can be re-heated ad infinitum and it gets thicker.

My best pancakes (which the kids love) are 4 heaped tablespoons of plain
flour, 2 eggs and half a pint of milk, whisked until all lumps are gone.
Then the trick is to melt a good ounce-two ounces of butter and whisk this
into the batter. This gives the pancake some basic fat which will enable
them to be non-stick for tossing and crisping up. You only need to grease
the pan for the first one and then all subsequent pancakes will cook and be
tossable on the basis of their inherent buttery fat. Eat with lemon juice
and golden syrup/treacle to give it its proper name.

They may think they have all the best, poshest nosh down south, better even than the wonders of pig’s colon and snails in France and fried scorpion in China. But if Nigella Lawson cannot learn from the above and resolve to make the Mackem leek broth seem like sex in a dish, she isn’t the culinary guru some think her to be.