In need of being jolted out of a post-Everton sulk, Pete Sixsmith took the road to Whitby where a grand fish and chips meal, leisurely harbourside strolls and reacquaintance with Darren Williams did the trick …

Sixsmith Towers was all doom and gloom yesterday morning as the disappointment of Tuesday night really began to hit home. Neither The Guardian nor The Northern Echo reports did anything to assuage the feeling that yet another opportunity had been wasted.

The wonderful weather helped to lift the mood, followed by a 40-minute hack around Hardwick Park at Sedgefield and then a drive through to Whitby to watch their game against FC United of Manchester.

I travelled with an old friend, a retired sports journalist who worked with Len Ashurst at Newport County, Peter Taylor at Burton Albion and, for a very short while, Martin O’Neill at Grantham Town. As MON arrived, Ray left, such was the nature of writer turnover in those days.

Whitby was glorious in the spring sunshine. The best way to approach the town is to leave the Moors Road just past Scaling Dam, pass through the village of Lythe and then the small beachside resort of Sandsend and on to the West Cliff at Whitby.

The car was duly parked near the Turnbull Ground, leaving a leisurely stroll down to the town, past the whale jawbones and the Captain Cook statue, looking over the harbour and higgledy-piggledy streets opposite, before dropping in to Trenchers for fish and chips.

Whitby’s most renowned Fish and Chip Restaurant is The Magpie Café, but no self respecting Sunderland fan can eat in there, so Trenchers has been my café of choice for a number of years. It isn’t cheap, but ee bah gum, it’s proper grand.

After a wonderful repast, another stroll along the harbour side and the pier and then up past the Metropole Hotel to the football ground, which, with 30 minutes before kick off, was already beginning to fill up.

They have been there since 1998, playing in a division that has a huge turnover of clubs. It’s not easy for them and nor is it easy to attract players, but they have always been competitive. However, this season has been very difficult and relegation looked a certainty, prompting a change of manager in December.


The veteran Ulsterman Tommy Cassidy was replaced by a former Sunderland player Darren Williams and results, particularly away from home, have improved. An excellent home win over high-flying Northwich Victoria (only their third of the season at home) lifted them out of the relegation zone and gave them hope of staying up.

Darren has just been appointed to the manager’s job permanently after a spell as caretaker. He is still playing and sat in the centre of midfield, not moving too far away from the centre circle, but exerting great influence over his team.

The famous Williams handclap was in evidence as he spurred Whitby on against an FC United team who have just got into a playoff position. Some of his charges, like Andy Appleby and Tom Portas were fresh from the Northern League and were making a big jump from Step 5 to Step 3, while others, notably Jeff Smith, had plenty of experience in the Football League.

It ended 0-0 but it was not a tedious draw; both sides had chances to win the game, particularly as legs and brains became tired. Alex White (a former Ferryhill student whose pushchair I once navigated round Sunnydale Fields while his dad, Nigel, turned out for Shildon Sunderland Supporters) hit the bar, while United’s Mick Norton, a classic bullet-headed No 9 blazed over at the death.

It was a game that was played in excellent spirit and well refereed in front of a good crowd of 640. A good number had made the trip from Manchester and seemed content with the result as they attempt to break into Step 2, where they could meet Darlington next season.

The Blues had lifted the blues, along with some good company and a piscatorial meal fit for a king – or Martin O’Neill. There’s another Manchester side to watch on Saturday and a similar score would be gratefully received. 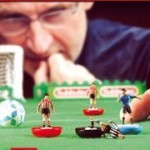 * Thanks to A Love Supreme for use of the Darren Williams photo.

Next Post
Manchester City v SAFC ‘Who are You?’: Mancini, Mackems and Mary Poppins