Where does the Blackburn passion come from?

It’s just something that has developed over time, I got taken to a Rovers game back in 92 when I was a young whipper snapper by a friends Dad who knew I had mo allegiance and I never stopped.

Growing up in Manchester Rovers were not at all fashionable but I was taken in by the excellent atmosphere around the club and the excitement of backing what many would see as an underdog.

Not what many would consider to be a normal reason to start following a team but I’ve been a Rovers fan for twenty years this year and not once has my support wavered.

Ever been tempted by “big” clubs or are you just biding your time for Rovers to become one again?

The fact Rovers are not considered “big” has no bearing on my support in the slightest.

I would support our boys if we were relegated in four consecutive seasons. It’s about being loyal and I’ve never been tempted by the seemingly easier options of the Manchester United’s of this world.

I believe being a Rovers fan makes you part of the club and like your own, actual real life family you NEVER stray, your club is your club. Women may tell you differently but size doesn’t matter.

Are you old enough to remember what was it like to be a Blackburn supporter during the years when you topped the league and represented England in Europe?

Absolutely. I was only about 10 at the time but the memory of winning the title at Anfield and having the likes of Shearer, Sutton, Hendry, Sherwood and Flowers in the side is a memory that is ageless.

We never really had a good run in Europe but I can take that little era of excellence with me to the grave.

Name one high and one low of supporting Blackburn.

High: outside of the obvious witnessing the Rovers career of the peerless Tugay on a weekly basis. So gifted and just fantastic… Loved being a Rover too.

Low: the relegation of the club back in 99 and the current demise of the club under those useless self servers who run it now.

Apart from the aforementioned Tugay who is THE best I really enjoyed the Rovers career of Ryan Nelsen.

He was far from the most talented player you’ll see but his attitude and desire made him one of the best. 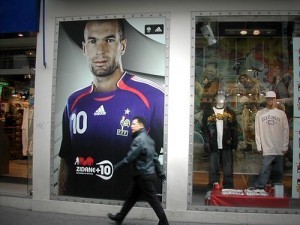 Image: Stefano
As for a fantasy player I’d of loved to have seen Zinedine Zidane at Rovers. You may laugh but we actually turned down signing him back in the mid 90s as we ‘already had Tim Sherwood. Such a cruel near miss.

But the worst for me is probably Vince Grella. Not a bad player per se but he’s been that injured for the last four years he’s robbed a living from the club.

At Kean I’d say at times it’s been over the top if not misplaced where as at Venky’s it’s like hitting a nail on the head.

The anger at Venky’s is very real and it needs to be recognised and investigated by a governing body.

Look at Pompey, Leeds and Rangers… That could be us soon.

Given, Michael Gray, Allardyce, Diouf and more: which links between our clubs stand out for you?

Difficult one because Sunderland and Blackburn don’t have many strong links but I did used to appreciate the efforts of Michael Gray.

And I know the high regard in which you hold him.

Do you wish you had Martin O’Neill?

Who will finish top four, in order, this season?

Hand on heart, who will go down?

Wolves, Wigan and QPR. I honestly believe we’ll stay up based on our post Christmas form.

It WILL be close but we’ve got the players to do it even if the manager is at best ordinary.

If not mentioned, where will each of our clubs finish?

Which form of cheating in football most annoys you and who is the worst culprit?

The imaginary waving of cards to try and get another player cautioned, it should be an automatic booking such is the blatant lack of professionalism involved.

And for the worst offender I’d say pick any Chelsea player.

Club versus country: which comes first and why?

Club. The country still means a lot to me but I struggle to fully back odious mercenaries like Terry and Cole.

Will you be at our game? If not how will you keep tabs? And what will be the score?

I am afraid I have only today (Monday) returned from a New York trip so I am in no fit state to make the trip such is the backlog of work I have to tackle.

I will of course stream the game and I believe it is a good time to play Sunderland in the absence of Sessegnon and with your cup commitments. Both teams score but I’ll take us to edge a five goal thriller… We do need the points more after all!!!

4 thoughts on “The Blackburn ‘Who are You?’: nearly getting Zidane and wanting Martin O’Neill”

Next Post
The Lads are all right. After beating Charlton, so are the Lasses