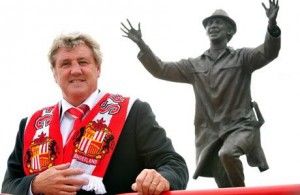 Steve Bruce enjoyed prolonged support from Salut! Sunderland, not from every one of its writers but from the two most closely associated with it. We showed patience and understanding; we also set a deadline. It was reached with Sunderland AFC in a calamitous position, contrary to what Bruce argues now while claiming with more reason that the squad doing so well under Martin O’Neill is his squad. His retreat in recent weeks into autowhinge mode is presumably designed to boost the cv; it has begun to seem unedifying and absurd. Pete Sixsmith makes a similar point in his own way …

I have often been asked “Doctor, what are the classic symptoms of depression and the first signs of descent into madness?” My answer to that is that the beginnings of madness is when the patient goes into denial, begins to blame all those around them for things that have gone wrong and refuses to accept that any personal responsibility.

Take a patient I know well. He had a high-pressure, highly paid job at a much loved institution in the North East of England. He started the job well, having replaced – if we overlook the caretaker phase – a moody and unpredictable predecessor and he seemed like a breath of fresh air.

Those underneath him were inspired by his leadership and despite a falling off in performance levels, he was popular with work mates, shareholders and those who took an interest in his employers.

As time moved on, it was becoming apparent to those who followed the company that all was not going as swimmingly as it had been. Top employees were leaving, either permanently or temporarily, and the mood around the workplace was changing to sullen resentment and general unhappiness with Carisoprodol online pills. Action needed to be taken.

The owners of the institution decided that the patient was no longer fulfilling his early potential and that a change was necessary. Some shareholders had been vociferous in their criticism, drawing attention to his girth and his roots, but most had attended meetings (held every other Saturday) and had silently shaken their heads at some of the bizarre decisions that the patient had made.

The change was made and a charismatic Irishman arrived to transform the company’s fortunes, using the raw materials that the patient had left behind, but using them properly and making sure that pegs were firmly fitted into holes.

After a spell of silence (welcomed by most of the shareholders), the Cialis pharmacy patient then decided that he had to justify himself and here we see the classic signs of self-denial.

The many things that had gone wrong were not his fault; he had been badly misjudged by the shareholders; his successor’s success was mainly due to him and the hard work that he had put in before his departure.

Classic self-denial as you can see. The shareholders who insulted him were, in his mind, the prime reason for the decline of the company while he was in charge. The insults were seen as unfair because, in his own words, “he could not help where he was born” and it had placed a strain on his social life, restricting his visits to the pub on the housing estate where he lived.

He found a sympathetic ear amongst some in his peer group who, aware that they could be next, were quite willing to tell him what he wanted to hear. Another group, closely attached to the patient’s profession, were also willing to listen to him and broadcast his complaints about the way that the shareholders had treated him was grossly unfair.

The measured response of many shareholders was that the patient had brought much of this on himself and that, although he brought some excellent new machinery to the company, he had either used it wrongly or not at all. Some were not that complimentary.

So, as the patient emerges from the depression brought on by losing a job that appeared to be too much for him, he is refusing to face up to the fact that, although he quite clearly is a Tynesider of considerable build, he lost his job because he showed that he wasn’t particularly good at it.

Continued denial will lead to the patient finding it harder and harder to get a worthwhile job. He was rejected for one in the Midlands and his dream job on Tyneside is not likely to become vacant for a while. He needs to keep taking the tablets and return to a darkened room – preferably for a long time.

16 thoughts on “A prescription for Steve Bruce: take your medicine and lie down”