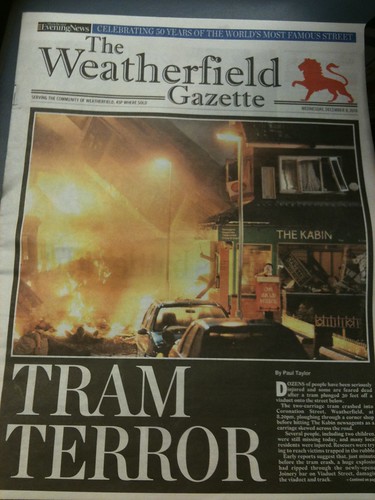 We divide as a nation on such weighty matters. When I’m in England, I watch and enjoy it. That said, while I do not hanker for the days of Ena Sharples and Minnie Caldwell, I do have to overcome an impulse to shout at storyline creators whose fondness for murder, other serious crime, fires, accidents and adultery must make this by far the country’s most dangerous and immoral street. It may not be as good as it was – things rarely seem to be – but wild horses would not drag me to Eastenders.

Enter Flaming Nora. Behind the sobriquet is Glenda Young, a Sunderland lass who runs the staggeringly successful www.coronationstreetupdates.blogspot.com site. The Sunderland Echo says it gets 350,000 hits a months which, I can say without even checking, is a little more than this one does.

Glenda/Nora wants our help in tracking down any references made in Corrie to Sunderland and any known links with members of cast and crew. A comment posted below would do the trick.

Regular viewers will know of one recent mention, when Peter Barlow – aka, in tabloidspeak, ”serial love cheat Pete” – covered up a tryst with his lover in a Cheshire hotel by telling poor Leanna he was off to Sunderland to ”buy a greyhound”.

Glenda tells the Echo this is the second reference known to her: “The first time was when one of the characters left to become an air hostess ‘flying out of Sunderland airport’ decades after the airport had closed. So it looks at least as if the writers have done a bit of research this time when Sunderland gets a mention.”

I loved the way she described the episode at her own site:

Nailah Cumberbatch, who plays factory girl Jessie, is heading for a bumpy landing thanks to some out-of-date script-writing. Jessie told the Underworld girls she’d landed a job as a trolley dolly with Majestic Airlines flying ‘from Sunderland’. This came as a bit of a surprise to car makers Nissan who have been building cars on the old Sunderland Airport site for 20 years! A Nissan spokeswoman told the Newcastle Journal: “We sometimes get low-flying aircraft, but I think we would get a bit of a shock if one of them tried to land. I don’t know who would have got the biggest surprise, the pilot or the workers in the factory.” Agony aunt and Journal columnist Denise Robertson, who watched the episode said: “I think they thought ‘where can I think of that is the least exotic place imaginable’. I just thought how silly that was. To me, Sunderland is the greatest place in the world.

Needless to say, Salut! Sunderland is able to draw Glenda’s attention to another link. Not for nothing has this site been going since the FA Cup-winning season of 1937.

Back in the dark ages of the early 2000s, Monsieur Salut was a highly paid newshound at 5573 – let no one ask why the London and SE branch of the SAFCSA chose the name – and the no-nonsense, slavedriving, French-speaking de facto editor, our own Joan Dawson, instructed him to supply a stream of celebrity interviews. By the time I delivered one Joe Simpson as one of my interviewees, 5573 had become Wear Down South – great name, chosen by ballot after lots of younger branch members tired of honourng such a long-ago event.

And Joe was Wayne’s dad, one of Corrie’s great anti-heroes, the national hate figure in a custody battle. Joe gave a great interview, recalling the day he was subjected to pantomime booing when introduced on the pitch at the SoL. He even won a pre-mug Salut! competition, concerning Gina McKee, the exemplary actress from Peterlee, and her famous Premier Passions voiceover. I reported it like this:

Thus John became Joe – in honour of his very favourite player, Joe Bolton. This is how he explained his perhaps surprising choice when we spoke back in late 2001: ‘I know you need flair players. But fans take to heart those who have that do-or-die approach that epitomises the Sunderland spirit.’

Reminded of this via Twitter, Glenda was delighted: ”Fantastic! Thanks for that, just the thing I’m looking for (and shame on me, forgot about!)”

Over to Salut! Sunderland, Corrie-savvy readers to come up with anything we’ve missed …

And a piece Joe wrote for us, lauding the Darren Williams rapport with fans:
https://safc.blog/2007/04/never-mind-shack-hurley-monty-superkev-lets-hear-it-for-darren-handclap/

1 thought on “Sunderland, Coronation Street and a plea from Flaming Nora”

Next Post
Aston Villa v SAFC: will Villans or Mackems tell us the score?