Pete Sixsmith has cast the fnal votes in judging for the 2012 ‘Who are You?’ awards and it can be revealed that they have made all the difference. That, however, is for later; this is his last preview of a Sunderland match this season and it takes in another important game, West Auckland Town versus Dunston UTS at a location Pete decided was only the next best thing to the SoL on Sunday …

When not slumped in East Stand Row 34, Seat 404, or being captured on TV looking grumpy at some away ground, I can be found doing the Northern League circuit with various other lost souls.

As a long term resident of Shildon, I can say they are the team that capture my imagination and I am a season ticket holder, nay vice President, at Dean Street, which, incidentally, will be the home of the “new” Darlington club for next season.

I also trot off to other grounds and have been accompanied by the admirable Malcolm Dawson (of these pages) since his return to the North East. Alas, his sister cannot be persuaded of the intrinsic beauty of Easington Colliery v Ryton and Crawcrook on a Tuesday night. Women just have no soul!!

A particular favourite is the FA Vase, the FA Cup for sides at Step 5 and below. In the past it has taken me to such places as the Cambridgeshire St Ives, Clitheroe (Jimmy wasn’t there – he was in detention for putting a banger down Ossie Higginbottom’s trousers), Stotfold, who play at Roker Park – how could I possibly miss that one – and the Pearl of Merseyside known as Bootle.

I have also been to five finals, seeing Whitby Town and Whitley Bay win, the latter twice, and Tow Law Town and Bedlington Terriers lose. All were great occasions and last year’s between Whitley Bay and Coalville was probably the best game I saw all season.

Now we have two Northern League clubs in the final on Sunday when Dunston UTS take on West Auckland Town. Normally, I would be (metaphorically) girding up my loins for a day in London and a couple of beers in the Euston Flyer post match, but no. The Stadium it is for me as I complete my first ever full season with Sunderland.

There is a debate going on about the final. The FA lose a lot of money on it, (although those losses pale into insignificance compared with the money showered on the likes of Eriksson, McClaren and Capello over the past few years), and there is talk of them wanting to switch it to a less expensive venue.

With two local teams involved, some said, why not play it at the SoL, the SDA or the soon to be derelict Darlington Arena. It was a suggestion that did not go down very well with the competing clubs.

The purpose of the Vase is, as I see it, threefold. Firstly, Carlsberg’s generous sponsorship means that money can be made out of it. Secondly, there are new clubs to meet and new places to go. It’s a great adventure to go off to Lancashire or Yorkshire in the early rounds and then to Norfolk, Cornwall or Spennymoor in the later ones. 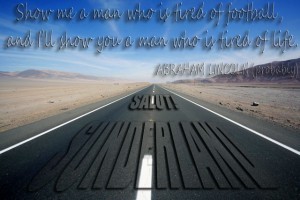 But the great carrot at the end of the long stick is the possibility of appearing at Wembley. For the likes of Mattie Moffat, Andrew Bulford. Mark Bell and Liam Connell, this is an opportunity that may never be repeated. Pro players have a number of chances to step out under the arch (almost said the Twin Towers, showing my age), but for Step 5 and below, the Vase is the only chance you get.

I have a lot of time for both clubs. Dunston have a tidy ground and a snack bar that is the purveyor of some of the best steak pies in the League. Their committee, which almost seems a hundred strong, is visible and voluble. They play a strong, direct form of football which relies on power and strength. They have one drawback – a large number of their fans and players are Mags.

Against that heinous sin, West Auckland Town are three miles down the road and have always made me welcome whenever I have handed over my admission, programme and raffle ticket money. They are a true village club and have a long and fascinating history.

Most readers will know that they won the “World Cup” in 1909 and 1911 in Italy. Who can ever forget Dennis Waterman’s lamentable footballing skills and even more lamentable attempt at a North East accent in the 1982 film dramatisation? Apparently all the players were from South West Durham, but they spoke as if they came from South West Walker. A Durham accent is different and far sweeter than one from Tyneside.

They reached the FA Amateur Cup Final in 1961, losing to Walthamstow Avenue, with their goal being scored by my first footballing hero, former Shildon player, Alan Douglas. Monsieur Salut’s father, a prominent Northern League figure, may well have been in the 45,000 crowd that day.

Like Dunston, they have a very good pastry based product on sale in their ground. They specialise in Taylor’s Pies from Darlington, and there is not much to beat a warm Taylor’s pie and a cup of hot Bovril on a cold Tuesday night in West.

There has been some carping in the region about the North East’s success in this competition. Those of a mean disposition (mainly supporters of Bishop Auckland and Spennymoor) decry the League’s record, saying it is due to the fact that Northern League clubs do not want promotion through the pyramid and are quite content to be large carp in a small carp pond.

Promotion is there for those who want it, but travel costs and the fact that most players would be happier to be at home at 6pm after an away game at Shildon, rather than nine after an away game at Salford, means few clubs are prepared to take the risk. Durham City’s resignation from the Northern Premier and projected return to the Northern League supports that argument.

The texts will be flying between North London and Sunderland on Sunday. A friend of mine who is attending is a keen Manchester City fan, so he will have one ear on what is happening at Eastlands, one on the events at the Stadium and both eyes on the Wembley pitch. I suspect City will win the title but find it infinitely harder to split Dunston and West. The heart says West, so we’ll go with that.

Our game could be a cracker or it could be a damp squib. Let’s hope MON and the team send us into what is laughingly called the summer with a smile on our faces and a spring in our step, with and no carping …

1 thought on “Sixer’s Sentiments: romance versus reality as FA Vase final given a miss”

Next Post
Sing your hearts out against Manchester United. For Old Time’s sake