McCormick’s Craic has one of its more scholarly moments. Here, inspired by recent musings on football and fascism, John McCormick traces the history of one of the men most closely associated with Real Madrid and finds him commemorated in places you’d expect people with handed-down memories of Franco atrocities to bristle at any mention …

When we qualify for Europe and you’re flying into Alicante airport for a match against Hercules or, failing that, you have a stag or hen night in Benidorm, the plane may fly along the coast before turning in to land.

If it does, look out of the window. Find the lighthouse at the top of a cliff a few miles south of Alicante and search the area around it. You probably won’t see much because what is there wasn’t designed to be seen from the air.

Go onto Google Maps, though, and things change. Type in “Cabo de Santa Pola”, find the lighthouse and ramp up the magnification. Just on the other side of the track from the lighthouse, between some derelict buildings and the cliff top, you should see two circular structures.

If you have keen eyes you might also see some small dark rectangles nearby. You are looking at the remnants of anti-aircraft defences from the Spanish civil war: barracks, bunkers, shelters and gun emplacements, and visitors’ photos posted onto the map show some of these clearly.

Their presence isn’t surprising as Alicante was the target of many air raids between 1936 and 1939 and towns such as Torrevieja a bit further down the coast were also bombed. Franco’s forces held the island of Mallorca, from where planes could maraud up and down the coast, disrupting shipping and attacking towns throughout Valencia and Catalonia.

However, these planes weren’t all Spanish. At least some were from the Aviazione Legionaria (Spanish, Aviación Legionaria), part of Mussolini’s support for Franco, which operated from the Balearics from 1936 until the end of the war.

Just what, you might be asking, does this have to do with football? The truth is, not a lot, but first Pete Sixsmith and then Jake started a train of thought which took me via Mussolini to Franco and from there to a man called Santiago Bernabéu Yeste and the town of Santa Pola, which lies just to the south of the lighthouse.

This is a story of troubled times; I’ve used what sources I can find (and tried to avoid Wikipedia) but unsavoury episodes do get glossed over by the winners and the losers aren’t around to put their case. If anyone wants to comment or correct I‘m not going to argue.

In the 1920s Alicante was very much a Republican stronghold and it remained that way throughout the civil war. It was to Alicante that the Republican forces retreated and it was from there that the remnants of the Republic’s government fled the country, in April 1939, when the war ended. Thousands never made it out and were incarcerated in a concentration camp to the north of the town; many didn’t survive.

One of Franco’s captains (serving elsewhere, it must be said) was a certain Santiago Bernabéu Yeste.

Born in 1985, this soldier had had a life before the war. He had become a lawyer and joined a right wing (some say an ultra-right wing) political party, which caused him problems during the time of the Spanish Republic. Some sources say he had needed to go into hiding to escape arrest, others that he fled to France to stay free.

When war broke out he joined Franco’s army and became a captain in the 150th Moroccan Division. He was decorated for the role he played in the taking of Bielsa, a strategic town in the Pyrenees. From what he later said about his war experiences there can be little doubt that Bernabéu, known in Spain as “un hombre de orden” (a man of order) had little time or pity for Catalan or Basque separatists who espoused the Republican cause.

However, Bernabéu had another side. He was devoted to Real Madrid. He had joined the club as a boy and spent his playing career there, debuting at the age of 18 and eventually becoming captain.

Although he qualified as a lawyer he remained with the club when he retired from playing, as a coach, manager and in administrative roles. He was still there in 1935, a member of the board, when his political beliefs brought his career to a halt. 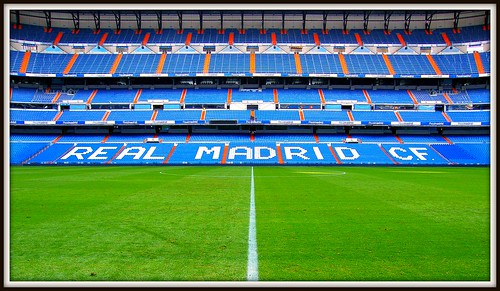 At the end of the civil war national football resumed. Real had lost many of its directors (some had been anti-Franco) and its Chamartin ground – used as a prison at some point – was derelict and damaged.

Atletico (under the name Atletico Aviation) was the dominant Madrid club. Santiago Bernabéu resumed his place on the board as Real began reconstruction. He was appointed president in 1943 and remained president until his death in 1978. His vision included a new stadium, the Neu Chamartin, which was completed in 1947, separate training facilities (the sports city) and the signing of overseas stars such as Alfredo di Stefano, developments which laid the foundation for the rise of Real Madrid.

He became one of the leaders of European club competition, and in ensuring Real’s dominance he did much to raise the status of Spain and its clubs. He received many honours for his work in football and the Neu Chamartin was renamed the Estadio Santiago Bernabéu in 1955.

What isn’t clear is the degree to which Bernabéu’s pro-Franco history helped the club to prosper.

Whereas Atletico Aviation had links to the military it seems that Bernabéu didn’t allow politics to interfere with Real, and it is known that he had a row with one of Franco’s generals about access to the VIP area of the ground, winning a stand-off with him. Two excellent sources, Phil Ball at http://community.spain-football.org/ (the site also gives a short history of Atletic Aviation) and Chris Mann at http://equaliserfootball.com, suggest Franco had little influence on him. However, I can’t imagine that Bernabéu’s association with the Nationalist cause could have done the club any harm.

And this brings me back to Santa Pola, a small town about 10 miles down the coast from Alicante. It has magnificent beaches, as a consequence of which it is swelled by tourists, many from Madrid, in the summer.

Nonetheless, at its heart it’s a small fishing port in the province of Alicante, in the Community of Valencia. Its road signs and street signs are in two languages, Castellano (ie Spanish) and Valenciano, which people tell me is related to Catalan. I can’t believe that this small working class town, with civil war defences of its own, was anything other than Republican during the 1920s and 30s. So it’s quite a surprise to find that one of its more prominent streets is named after Santiago Bernabéu. In fact the adjacent beach is commonly known as the Bernabéu, as is the surrounding area in estate agents’ windows.

Apparently Santiago Bernabéu was one of the madrilenos who holidayed in Santa Pola. He had a house and a boat, and it was here he lived after retirement. The town is keen to celebrate this link and it’s not so long ago that the mayor and Real Madrid signed an intention to develop a Santiago Bernabéu museum with an exhibition of material from his time at Real Madrid and also from his private life.

Here’s how one website (http://thisisspain.info/costa-blanca/santa-pola) quotes the mayor “ … Bernabéu’s presence there is part of the history of Santa Pola. We regarded him as one of our citizens because of the long periods of time he spent there. I even believe he ran the Club from Santa Pola.”

Around the time the “intention” was signed the Spanish government brought in a law designed to right some of the wrongs of the Franco regime.

Events since illustrate just how divided Spain remains. While some people are digging up mass graves and revising history others want things left as they are, with no discussion and no questions. In Alicante itself there are still debates about memorials; one, a plaque unveiled in 2011 to commemorate 300 civilians killed in one of the air raids, was vandalised a few weeks after the ceremony.

The site of the concentration camp has been officially commemorated with street signs but, as yet, there is no other memorial.
And in the midst of this we have a working class town in a former Republican province honouring a right wing Nationalist officer. I find this strange, much as I’d find it strange if Consett named a street after Margaret Thatcher.

Maybe it’s a measure of how much the Spanish do want to leave the past behind. Or maybe it just tells us how important football is in Spain and how it unites the country.

8 thoughts on “Real Madrid, Spain’s Civil War and a homage to an improbable hero”