The quality of the clip wasn’t great, but there was no mistaking the quality of Ryan Noble’s winning goal against Groningen. For those who have not seen it, take a look and revel in the pace, skill and accuracy that this young man shows as he slots the winner past a helpless Dutch keeper to give us third place in the Peace Cup.

It is reminiscent of a number of goals he scored for the reserves last season. His pace and willingness to run at defenders is an attribute rarely seen in a red and white striped shirt, whether it is manufactured by Adidas, Asics or Hummel.

He is very much a Marco style player, although the legs are more thick branches than the tree trunks that Marco possessed. Like Marco, he can destroy a defender over a short distance with his speed and strength.

One of my abiding memories of Gabbs is the way he tore past a disbelieving Sergei Baltacha before slotting the ball in the Ipswich net. Baltacha, a former USSR international, was open mouthed in disbelief as this force of nature swept past him.

See the Ryan Noble goal – and the four others in Sunderland v FC Groningen at this link. https://safc.blog/2012/07/peace-of-mind-in-south-korea-as-sunderland-pull-off-late-win/

Bruce and O’Neill have been patient with Noble. They have sent him out on loan and have rarely used him in the first team. His form with the reserves dipped a little, although he finished the season well at Hartlepool. Poolie friends of mine are very, very keen to see him in a blue and white striped shirt next season – but that goal, and the one he helped set up for Fraizer Campbell to level the stores, may mean that he spends his time with his parent club.

He looks to have filled out over the summer. He was rather slender and some thought that he may never be able to cope with the hurly-burly of the Premier League. They could still be right:;on the other hand, we may have the chance to hail a new hero come August.

We did have the chance to hail a new national hero yesterday afternoon as Bradley Wiggins won the Tour de France. If there were an award for “Greatest Sporting Event Of The Year” the Tour would walk it. It has everything: drama, excitement, speed, a man who dresses up as the devil and, to cap all that, it has now been won by a Briton and a pretty cool Briton at that.

Wiggins rode brilliantly, backed up by a superb team who gave him 100 per cent support throughout. There were three defining moments for me. Firstly, when he ordered the peloton (just about my favourite all time word – only apparatchik is better) to slow down to allow Cadel Evans to catch up after some git had thrown tacks on the road leading to multiple punctures and appeals for plastic bowls and repair kits. 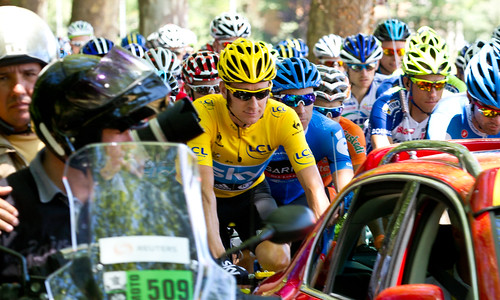 Secondly, he destroyed the field in the penultimate stage with a magnificent time trial which strengthened his hold on the Yellow Jersey and thirdly, in an earlier stage he rode in with the Italian, Vincenzo Nibali who had criticised him for lacking respect for the Tour. As they crossed the line, he put his hand on the Nibali’s shoulder thereby diffusing a potential feud and showing that he had the utmost respect for the greatest annual event in sport.

Hopefully, Ryan Noble will progress to the top of his profession as effectively as Wiggins has in his. He has a long way to go, but maybe that goal in a meaningless pre-season friendly could take him out of the peloton and into the leading bunch. We shall see.

Long before we knew about Bradley Wiggins’s twin passions of cycling and guitar, Pete Sixsmith was singing the praises of the Tour de France. Catch his earlier article, from a short-lived series about ‘other sports/teams I quite like’, at this link: https://safc.blog/2010/07/another-team-i-like-2-the-tour-de-france-teams/