Let us see whether the Stadium of Light is up to staging a game of football in August after all. Tomorrow night, after the humiliation of Saturday’s postponement, Sunderland are due to take on Morecambe in the Capital One Cup (league cup to you and me). We’ll take the risk of running another “Who are You?” with due apologies to our Reading volunteer, Roger Titford, for having wasted his time last week.

If the phrase “long-suffering fan” did not exist, it would need to be invented for Mick Dennison*. He berates fellow Morecambe residents for their lack of interest in the Shrimps, as the town’s football club is known, bemoans the impact on trade at his “traditional pub B&B”, the York Hotel of the club’s move away from the Christie Park and is not even sure he wanted the football season to start post-Olympics. Yet he’s clearly a devoted supporter, organises away travel and will be at tomorrow’s game …

Salut! Sunderland: Is it a dream draw for you or are you blasé about cup games, knowing the crowd will be low?

It is a very good draw for the club, a chance to play against Premier League opposition, a great day out for the travelling fans and you never know a shock giant killing in the offer. A home draw would have been ideal as the atmosphere would have been better.

And is it to be a quick, honourable exit or are you more than capable of pulling off a shock win?

Don’t ever write off Morecambe, we have beaten Preston, Wolves and Coventry in this competition over the years, the first two teams away – you never know. 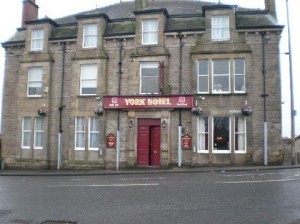 Tell us about your club, what it means to the town and to you and how far you feel it can go, having gone from play-offs to mid table of League 2 in a short time?

Morecambe have been my club all my life, I was born in the town and to a minority of football fans in the town it is their whole being. Our problem is apathy amongst the rest of the townsfolk and with very little money to spend we can only ever try to compete with the bigger clubs coming down from League 1. Our rise from the Conference to the League has been a great experience for players and fans alike but there is a bit of a curse on the new home ground – The Globe Arena. Once we have exorcised that we may just go up a league as our away form is pretty good.

Any links you can bring to mind between our two clubs, even if it’s only the number of Wearsiders you get staying at the York Hotel?

There are four players I can think of – Alan Kennedy, Neil Wainwright, Phil Malley and Leighton James. I have an electrician called Kenny who is a Sunderland fan and a bloke who comes in to watch Sunderland when they are on TV, his missus is a Newcastle fan – plenty of banter there then!

Are you a confirmed Globe Arena man or do you miss Christie Park as our older fans miss Roker?

As I mentioned there seems to be a curse on the new ground as far as our form is concerned. Like all new grounds it still has that plastic feeling and most of the money seems to have been spent on the corporate stuff. Christie Park was small, homely but intimidating to the opposition. You should have seen Sol Campbell when he made his only appearance in L2 with Notts County – he looked lost. The new ground has been built in the wrong place with no regular busses to it, that I think has lowered the crowds.

Is there good support in the town for Morecambe FC or do you suffer from big-club competition with so many PL and Championship sides not so far away?

The support in the town is pathetic, not only do we have big club competition but we also have to put up with people even going to watch teams like Leeds United (Now not a big club) It’s even worse for night games during the European campaigns especially when Man Utd are on TV, it seems most of the town supports them more than Morecambe.

Top of the league after that excellent win at Exeter, down to earth with a home defeat to Port Vale. What is your prediction for this season?

I think with the players we have got (and it is a small squad), we will be lucky to be knocking on the door of the play offs. We had a great start to last season due to a great away form but tailed off towards the end. We need consistency and better finishing in order to compete with the top teams in our league.

Following on from that, name this season’s PL top four in order, the FA and League Cup winners and the position you think Sunderland will end up.

Did the success and spirit of the Olympics make you less interested than usual in the resumption of football?

I sort of thought all the way through the Olympics that I didn’t want it to end because that would mean the start of the football season. I have got to admit for the first time in my life – I’m not that bothered about football and could take it or leave it. The top players just earn far too much money and are well out of touch with their fans.

And what would you do to stamp out diving and other forms of cheating on our game?

Apart from positioning myself in the top tiers with a sniper rifle I would go for instant dismissal, just like in the workplace – gross misconduct. Just look at both codes of Rugby – they hit each other with the force of a charging Rhino and still don’t roll around in agony.

Will you get to our game and, whether yes or no, what will be the score?

I will indeed be coming to Sunderland with a coach load of my punters, 53 in fact. We will be stopping off at Kirby Stephens on the way and hopefully be drinking the York Hotel dry just after midnight when we get home after a 2-1 victory. However the heart says that, the brain says 3-0 to Sunderland

I’m a lifelong Morecambe fan (since the early 60s) and after leaving the town in 1974 to join the Army I eventually returned eight years ago and took on the York Hotel six years ago. On return to Morecambe and whilst exiled in the South I have tried to get to as many games as possible although recently business matters keep me away from some games. I used to write a fanzine for the exiles called Gazzetta de la Shrimp (It may be revived this season) Since the ground move trade has suffered on a Saturday match day as fans forget everything you did for them in the past and go and find other places to congregate pre-match. I have started up an away travel club to attempt to bring fans back in before the games and of course always welcome away fans. My greatest day supporting the Shrimps was at Wembley when we won the playoffs against Exeter in 2007 – I hope I’ll be around to see us playing on a level field against Sunderland one day. Now that will be Fantasy Football!!