Stephen Goldsmith writes: Let’s all be honest here. As my weekly e-mails float out in an attempt to gather people’s predictions and thoughts, enthusiasm isn’t always, shall we say, bouncing from the computer (or crap phone) screen when I read the replies. As the two main sources of our predictions – Sunderland and Newcastle – meet this weekend in what will surely be some sort of love fest played all in the right spirits, asking people for another two predictions seemed pointless. Especially when I annoy everyone and ask for a summary. This week, I wouldn’t blame anyone if they had simply replied:

That’s kind of how I feel myself. I normally have an idea of who plays who during the week leading up to our games, but I literally googled the fixtures yesterday afternoon in a bid to see who else was playing. The big one is all we care about. Or it should be.

For productivity reasons, we are predicting a second match but I will, again, save people from something they won’t be interested in by just adding the scores. Despite what my mates, girlfriend, family and employers say, I AM adaptable and spontaneous – so in true rock n’ roll fashion – we’re going to see everybody’s’ little summary on why they think the lads will win on Sunday. Or draw. Or lo… NO! Be gone nasty thoughts.

Every time I think about this damn fixture I get nervous. Here goes:

Goldy: I’ll start then. Being honest, we could sit top of the league with them at the bottom and I’d be convinced we’d lose. Can’t help it. I don’t enjoy these games and I instinctively fear the worst. Thinking logically, however, I actually don’t think we will lose – and I think if ever there’s a good time to play them it’s now.   I wouldn’t be surprised to see Gardner thrown back into the midfield and I wouldn’t be surprised to see him score. Can we do it? Just. 1-0.

Jeremy: The time has come for Martin’s men to take all three points from Wonga’s Wongas. 2-1 to the lads. Fletcher and Gardner to notch on Sunday.

Sixer: 2-1. A repeat of 2008 and the omens are good; we play Stoke away in the next fixture – we did after the last win at the SoL. Fletcher and Sess to score for us, no prizes for guessing who will score for them.  (don’t mention his name – ever! The fear! -Goldy)

John Mac: I think AJ still isn’t up to speed and the last couple of weeks won’t have helped so he will make a slow start, not helped by some heavy tackling from their midfield. However, Sess will get among them and create mischief in and around the box, and this will create chances for Fletcher, who won’t be our only scorer, and others. But some gremlin or refereeing decision will come to their aid and they will score in the second half. 2-1 to us.

Malcolm: These games always bring out the pessimist in me and I rarely enjoy watching them. If we are winning I always expect a jammy equaliser and if we are losing it just reaffirms my belief that the Mags are a bogey team. That hasn’t stopped me bigging us up to the Black and Whites in my local and logically I feel we can and should win this one. But even then I won’t enjoy it until after the final whistle. I expect the defence to nullify the black and white threat and despite the fact they have the edge on us in midfield hopefully Norman Stanley and AJ can find the net. Those of you watching on telly look out for the sad bloke in the NW corner biting his nails. 2-0. 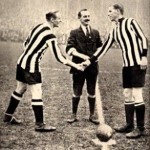 Bill: The Maggots ’lack of depth and bench strength is starting to show. Our midfield remains troubling but add in the crowd support and the points are ours. It won’t be easy and it could be dirty but, on the other hand, it might just turn into a cracking good game. 3-2. (I could not portray a five goal thriller to be enjoyable in this fixture. I’d have a heart attack – Goldy)

Colin: Logically, our performances this season – and the self-evident quality in the Newcastle squad – would make me fear the worst from the derby. But if only the players – and we have some very good but underperforming players – can rise to this special occasion, it is a game we can and should win. I’d settle for Fletcher having to watch others do the business from midfield or the wings. 2-1 to Sunderland.

Jake: It’s been a stop-start, er, start to this season, what with waterlogged pitches and international bloody breaks, and our lads are definitely not firing on all cylinders yet. In fact, it would be nice to see just ONE cylinder firing! Anyway, this would be the perfect game to hit our stride – but we need McClean/Johnson/Sess (2 out of 3 would do) to hit somewhere near the form we expect from them if we are to hurt them-up-the-road. “They” don’t look so hot yet either so it’s a perfectly winnable game. And if Sess can keep his arms down when he’s anywhere near over-acting Maggie soft-arses, then with eleven on the pitch we will win 3-2. I said we WILL win 3-2.

Robert: The mags have been fairly average this season so far and although they have some good players in their squad, they don’t seem to be firing on all cylinders. But, I think we haven’t come close to seeing what our potential could be either, and hopefully this is a week we’ll see more of it come out. I’ll predict a nail-biting 2-1 win for the lads with a late winner to get all three points.

This looked a little odd – ending the article abruptly. So here’s a couple of sentences just to fill it up. See, I told you I was spontaneous.