For the first time since O’Neill came to the club, there are murmurs of discontent from the terraces and Saturday’s match against his former club – Aston Villa – becomes a must win game of sorts.

Not a must win game in that O’Neill’s job is hanging in the balance here, but certainly a victory is needed as some sort of sign that we aren’t to be dragged into a relegation scrap. We also need reassuring that we have it in us to create chances. Hell, even a 3-3 draw might please me!

How all those Villa fans would love their side to turn us over and tell us on here, as they love to do, that they were right all along and O’Neill’s football is the anti-Christ blah blah blah. The gaffer’s CV has to count for something, however, and if ever there was a time for the fans to show a little faith it is now.

Revolutionary. Saviour. Life changing. He turned the club onto the right path after years of near misses and poor management. Took the foundations that were already laid, turned around some players that looked lost and used his budget magnificently. Everything he touched turned to gold.

The Scottish game was a different place then. It was awash with money and Rangers were a bemoth juggernaut that were spending freely. A policy that would eventually see them liquidate and die, which I would recommend you hope to happen to your most hated rivals as it’s quite frankly hilarious.

We had been in their slipstream for 10 years. He came and challenged them head on. Stood up to them. I don’t think anyone else could have done it. His star was on the rise. His stock was never higher. It was a case of right place, right time, right club.

I decided a Celtic fan would be better to talk about our current boss as we’re sick of hearing about his apparent downfalls from bitter Villa fans – indeed we are constantly being told by them that his style of football is negative. That said, I do have Celtic supporting friends who also warned me it wouldn’t be pretty when he was unveiled as manager. He has certainly favoured the other team to have the ball, only to then counter with pace. That worked for the main part last season but now as wins are beginning to be hard to come by, some people are starting to have a quiet moan that his methods aren’t working. How was his general style at Celtic?

I have never got criticism of his style at Celtic. While it was never Tika Taka, any team that contained Sutton, Larsson, Hartson being serviced by a flying Alan Thompson and Dider Agathe with Stan Petrov (who was an attacking midfielder before his move to Villa) couldn’t be labelled as negative. Our run to the UEFA Cup Final in 2003 certainly wasn’t negative. Winning a SPL record 34 games wasn’t negative.

His last season with us was dreadful. The football was some of the worst I have seen but that was mainly due to an aging team and manager showing too much loyalty to old warhorses who were done. Also, the loss of Larsson was a major factor. Yes, he liked to keep things tight. Likes a certain style of player but I wouldn’t level the not pretty tag at the majority of his time with us.

I think with Leicester, Villa and with yourselves the fact that he is in a far better league than the SPL forces his hand more.

Ok, so getting deep into that there is a couple of points to make. You’re right in that this is the Premier League, and we don’t have the same status amongst our peers and competitors as you do up there. I’ll tell you immediately what worries me from your last answer – it’s this niggling thought that while you had three years or so of good stuff before the awful football kicked in, we had around three months of it. It also doesn’t appear he had to turn around a bad spell while he was there. And the flying wingers you mentioned were supposed to be McClean and Johnson this year for us – but it just isn’t happening. I actually have a lot of belief in Martin, so to say this is a faith restoration exercise may be less accurate then maybe stating it as some sort of faith maintenance project. Looking from the outside in, should we be worried with the way we are playing?

I recently watched your game against Newcastle and I must admit that it was reminiscent of his last season with us. Is he maybe now too stubborn and hasn’t moved with the times? Is his type of player now not what the modern day needs?

Saint Martin has a habit of getting teams to the highest level that is possible for them. He has an impeccable track record of doing this. I suppose it depends what the Sunderland fans feel is their highest level. As an outsider looking in I see Sunderland as a mid table EPL club. Martin will achieve that.

That’s a fair assessment but I suppose that we were kind of hoping he could kick us on a tiny bit further than mid table – maybe to the level that Everton find themselves at. I don’t think that’s too ambitious. Do you keep an eye on us as a club now due to his presence?

I will be watching Martin’s teams until he gives up football. In fact, a few of us are talking about coming down for a game to pay homage to the man! I think Sunderland have had a poor start, but they are better than 14th place and going out the cup to ‘Boro. After a blistering start he seems to have hit a bit of a wall but…..it’s early days yet…he will come good.

I like to think of these crosstalk features as a bit of cross-club banter in some sort of virtual pub – so with that in mind I still have half a virtual beer left and rather than say goodbye there, I just have to ask you about Antony Stokes. When we signed this 18 year old he was tipped for big things, he had turned down a move to Celtic to come and play for Roy Keane. He spent more time in the city centre pubs and nightclubs than on the field here and was a bit of a let down, though he was still a kid. How’s he doing there?

He’s currently injured and has been out since the start of the season. He has been fantastic for us since signing from Hibs but there is always the nagging doubt that he should be doing better. That he was talent to burn but just can’t be bothered at times. Our manager has the habit of leaving him out of big games giving the impression that he wasn’t trusted. That’s strange considering that he has waded in with over 20 goals per season and also tops the assist charts.

I think we are his last chance before he ends up roaming around the Championship or League 1.

And on the aggressive bearded bloke from Cork himself, it’s easy to forget that Roy Keane played a big part in galvanizing Sunderland. He helped establish us (finally) as a steady Premier League club. He’s struggling to find work now because of the negative side of his managerial methods, of which there are lots. Do you ever see him returning to his beloved Celtic in a managerial capacity? And is that something you would hope for?

Hell, no! I can only see Neil Lennon being our manager for many, many, many years to come. Plus I don’t think Mr Keane will work in football again. I understand the job he did for Sunderland but too much water has passed under the bridge since for any sensible chairmen to take the risk. 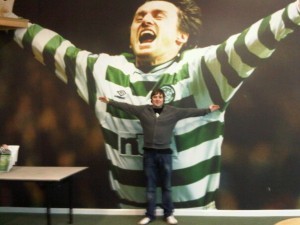 Kevin Graham on Kevin Graham: An over 30 Celtic fan who has been going to watch them since 1983. Been blogging about Celtic since 2005 and have been the editor of The Celtic Blog since 2009. I wish I could attend more away games and I have a massive man crush on Joe Ledley.

10 thoughts on “Crosstalk: Celtic tell Salut! Sunderland to be patient with Martin O’Neill”

Next Post
Age Concern, Martin O’Neill and that gap between Aston Villa and Sunderland