Question: what is it about the appalling suits who run much of football that makes them think they and their clubs are above criticism?

Answer: a mixture of control freakery, arrogance and sheer stupidity

No Sunderland to endure and Pete Sixsmith was spoilt for choice. SAFC Ladies’ third game in the Women’s Super League – a spirited comeback from a goal down to beat Bristol City 2-1 – and Shildon’s Northern League title bid (a win ) beckoned. But Sixer looked north of the border for his Saturday football fix …

The day went well. Trains ran on time, the weather was fine and the football was a trifle stilted but at least I got to see a home game where half of the home support didn’t leave before the hour mark.

Salut! Sunderland regulars are used to hearing about Blackcats, an e-mail group that acts almost as our parallel universe, inhabited in no small measure by witty, often wise SAFC supporters (most of whom, curiously, seem rarely to visit these shores). It was a message there that inspired the idea that Robert Simmons‘s second Voice of America column should be devoted to Claudio Reyna. The Blackcats subscriber was mentioning the tragic death from cancer of Claudio’s 13-year-old son Jack and was unaware that a small tribute had already appeared here. He had an additional reason for sadness: a friend’s daughter had worked for the Reynas as a childminder, living as part of the family both in UK & USA and playing a big part in Jack’s early years. Now Robert Simmons adds his own personal reminiscence …

In case you thought the theme song at Ibrox was changing to The Fields of Athenry, think again. Nor are Celtic fans about to augment their repertoire with Follow Follow. But supporters of both clubs did agree on one matter: the need to escape the over-moderation of the BBC’s 606 football chat forum …

Sunderland supporters are well served by internet discussion forums, from Ready to Go to Salut! Sunderland and similar.

I have been meaning to mention not606 for some weeks now. It is a lively site with good, well-read Sunderland pages full of talking points of interest to most SAFC fans. If you come across a certain Kingshirker lurking there, you’ll know it is me. But where did not606 come from? What was the common ground that united Glasgow greens and blues? 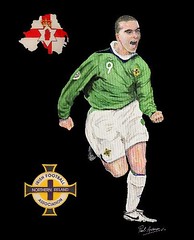 Just when I thought I’d acted on Steve Bruce’s behalf and sold him to Wigan, David Healy has departed the Stadium of Light, not a ground he graced too often as a player, and joined his boyhood idols Rangers.

Ewood Park, for Blackburn v Sunderland on a bitterly cold Monday, requires dedication. has it in abundance and will be there. He even warmed up for the challenge, if that is the right description, by subjecting himself to a blast of wintry Scottish weather, catching a Hibs v Rangers game that enabled him to see how a couple of our old boys are faring …

So, what to do the day after the day after Christmas? The Chocolate Fudge has been eaten from the last selection box, the DVD of Hilarious Footballing Gaffes Presented By DJ Spoony has been watched and proved to be as funny as a performance by Sting on his lute and the last of the relatives is still hanging around, desperately hoping for a New Years invite before they go back to the Salvation Army Hostel.

The prospect of “going to the sales” is about as enticing as an afternoon in the Strawberry with Ant and Dec, while the cinemas are showing nothing but rubbish – and American rubbish at that. What’s wrong with British rubbish? Where is Sex Lives Of The Potato Men when you need it?

A glance at the fixture list throws up Arsenal v Villa (too far away), Hull City v Manchester United (no chance of a ticket) and Hibernian v Rangers. Why not? Edinburgh’s not that far and it should be easy enough to get in, so let’s go, and leave the elderly relative on the doorstep for the Sally Bash to collect.