As Healy heads north on his loan move to Rangers – see our report by clicking here – Da Silva has joined the Spanish side Real Zaragoza for that ludicrous thing football calls an “undisclosed fee”. It may not matter that much in the broader scheme of things, but why should some fees be disclosed and others not?

If Healy can argue that he was never really given much of a chance to shine for Sunderland, the same is doubly true of the 30-year-old Paraguayan defender. Da Silva did so well for his country during the 2010 World Cup that he was given a permanent SAFC role warming the bench but hardly ever getting on to the pitch.

Some of us continue to believe that when we had back four injury/suspension crises, he deserved to be given a bit of a run in the side.

That said, he did not especially impress on the few occasions he did play this season and it is Steve Bruce and not Salut! Sunderland who gets paid an awful lot of money to get these things right. And if Bruce were to dangle the league table in front of our eyes, we’d find it hard to challenge his judgement.

But we are no longer intrigued by the wording used by safc.com, which describes Da Silva as “the second player to leave permanently in the January transfer window after David Healy joined Rangers”.

Healy’s move may be a loan until the end of the season, but look back at the terms of which he joined us: a three-year contract ending in Aug 2011. So whatever happens at Ibrox, he’ll not be back at our place.

Good luck to both of them. It is a shame their time at Sunderland was so disappointing, for us as for them. 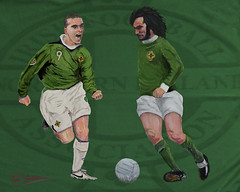 Next Post
Can Healy do for Rangers what he couldn’t for us?