Long ago, in the days of two points for a win, we started our last game of the season four points ahead of our promotion rivals Chelsea, and playing them at home. They’d win their game in hand, we knew that (and they did so, 7-0 against Pompey) but a point would see us up. Pete Sixsmith pauses from revelling in the weekend transfer fillips to remember the goal off a Chelsea “middle leg” that left us heartbroken …

Great weekend. Bring on the Blues.

When did we last sign a player from Inter Milan? That’s an easy one – never. We have now, with the arrival of Sulley Muntari from the San Siro.

When did we last sign a player who had a Champions League Winners medal from the previous season? A tad harder that one. We have done it once, in 1981 with Ian Bowyer, so we must hope that Muntari’s stay on Wearside is altogether more successful than that of the ginger haired Forest midfielder, who had an awful time at Roker Park.

The arrival of our third Ghanaian international was later supplemented by our first player from the West African state of Benin. Stephane Sessegnon joined from Paris St Germain for £5m, thereby making the journey from his first club, Sharks Of The Atlantic via Creteil, Le Mans and PSG, to the Black Cats of the North Sea.

He has a good pedigree, voted the best ever player in Benin’s history and having rubbed shoulders with the likes of Claude Makelele during his time at the Parc des Princes. I tried to watch the YouTube video, but the screaming soundtrack put me off.

Two new players in, and a feeling of well being as the club appears to be taking the prospects of European football seriously. Niall Quinn knows that we should have bought players in 2000 and 2001, when Reidy’s team was going well and needed that extra little bit of quality.

For whatever reason, the big money was not forthcoming and we ended up with Kevin Kilbane – a decent player, but never one that would take you to the next level. Muntari and Sessegnon may just do that,

It’s been an interesting week all round, what with Gray and Keys getting the push and Holloway threatening to walk away from a job that he clearly loves. He reminds me of a teenager at times – making great sweeping statements without any intention of carrying them out, but getting plenty of attention.

For what it’s worth, I think he is right to kick up a fuss, as he is the one who decides what his strongest team is, not the FA. I mean, in the 15 point season, we could have been fined just about every week for turning out a weakened side.

I hope that there is a positive response from fans to Ellis Short and Niall Quinn using the cash received fro Bent straight away. Crowds have been a little disappointing and it would be a boost for the owner to see in excess of 40,000 at the Chelsea game on Tuesday. Night games can be difficult to get to (although not as difficult as a Saturday 3.00pm – we don’t seem to have any between Christmas and Easter).

The first big crowd I saw at a Sunderland v Chelsea game was on May 18 1963, when we went into the last game of the season, sitting top of Division Two and needing a point from the third placed Blues to regain what we saw as our rightful place in the First.

It had been a season disrupted by appalling winter weather and by that terrible injury to Brian Clough. We had had a hiccup in February and Alan Brown had brought in a prolific Scots goalscorer called Andy Kerr to bolster the team. Kerr was not a success and the goals were less easy to come by without Cloughie.

But the excellent Johnny Crossan stepped up and kept us going, and wins at Swansea and Luton meant we only needed to draw against the third placed Pensioners to go up with Stoke City. We lost 1-0.

This was my first experience of the bitter disappointment that automatically goes with being a Sunderland supporter. The crowd of 47,000 came to hail the Champions and instead went home wet and disappointed as a goal from Tommy Harmer (“Of his middle leg”, according to Stan Anderson, and the only goal he scored for the Blues, the editor adds) gave Chelsea and their young manager Tommy Docherty a win that broke Red and White hearts. 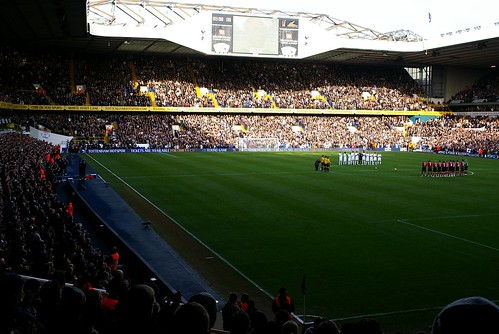 Picture: Jon Hall – White Hart Lane tribute, after Tommy Harmer’s death on Christmas Day 2007
Many years later, we have had some positive results against the Blues. I was at Stamford Bridge for the police horse game in 1985 and rejoiced in the Clock Stand paddock in 1992 as Gordon Armstrong’s header thundered into the net.

I sat in the East Stand as Kevin Phillips, Niall Quinn and Eric Roy took them apart in 1999 and watched this year’s superb win on Mr Horan’s TV, upsetting his dog as each goal went in.

Tuesday is a big game for both sides. Chelsea may have signed Torres by then and we should introduce Sessegnon at some stage of the game, both clubs showing their intent of not missing out on Europe. I don’t see Chelsea being as poor as they were in November, but if we can play with the verve and panache we did that day, we could claim an impressive double.

2 thoughts on “Soapbox: when a goalscoring Chelsea groin made us groan”