From Michael Brunskill, at the Football Supporters’ Federation, comes news of a useful initiative designed to find a sensible outcome to an emotive issue that divides supporters: the right to stand, or rather the lack of such right.

The FSF is to host a meeting next Tuesday (Feb 19) at the Isis pub, starting 6.30pm) “to discuss problems relating to standing at home matches”.

Importantly, the federation says SAFC officials will be present.

This may, of course, be to do no more than state the club’s case – and explain, justify or preferably overturn decisions to “deactivate” individual supporters’ season tickets, in other words ban them from their places. But the FSF is a little more optimistic, saying:

As you know might know, persistent standing in seated areas has led to some confrontations between supporters and stewards in the lower tier of the South Stand. A number of fans have also had their season tickets deactivated.

The FSF has invited representatives of the club to meet with those fans affected. We hope to work with both sides to find a mutually satisfactory conclusion which allows fans to create the best atmosphere possible and the club to meet its safety obligations.

Salut! Sunderland has addressed the issue in the past – notably at https://safc.blog/2010/03/manchester-united-a-standing-joke/ – and is aware that opinions differ sharply.

* Sample from that earlier piece in which Monsieur Salut) voiced support for Man Utd fans after the club was denied a full SoL ticket allocation because of persistent standing:

When the chant goes up to “Stand up if you … ” love or hate this or that, him or them, and is most commonly followed by “hate the Mags”, my heart is with the rival group that responds with “Sit doon if you hate the Toon”.

But there are times, even after rather too many decades of watching the game, when I am moved to rise to my feet because something is happening on the field to bring hope, fear or excitement – or maybe just because I need to be high enough above fans ahead of me to be able to see at all.

And sample response (from “George”):

I don’t agree at all with M Utd fans stance on standing simply because of their arrogance. They think they have a god damn right to do what ever they want at football matches. Its about time they were called to heal for their inability to follow Premier League rules. Whats good enough for the goose is good enough for the gander.

If the FSF can somehow reconcile the differences that exist, they’ll have done a good job. The pub – see its Facebook page at http://www.facebook.com/pages/The-Isis-Sunderland/214780425210106, from which the image is taken (hope they don’t mind) – is at 26 Silksworth Row. 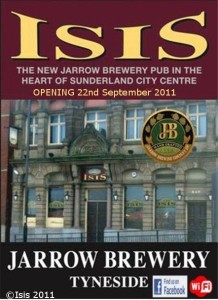 9 thoughts on “Standing joke or genuine safety issue: SAFC to meet the fans”

Next Post
Of Scotland, Hearts and Craig Gordon – a keeper to fight over