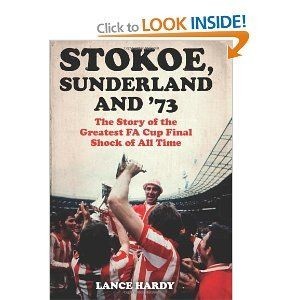 Lance Hardy’s carefully researched story of the 1973 cup final when Sunderland threw off underdog status to defeat Don Revie’s mighty Leeds and win the FA Cup can be bought via the Salut! Sunderland Amazon link: http://www.amazon.co.uk/exec/obidos/ASIN/0752898515/salusund-21 and the prices for used copies are the ones to go for. This is our report from Christmas 2009:

The greatest FA cup final shock of all time?

Not born, some will say. Or too small to care. A lot of us, though, are old enough to remember.

I know exactly where I was when President Kennedy was assassinated – the Essoldo in Bishop Auckland (they interrupted the film to announce it) – and when Diana, Princess of Wales died (in bed at a friend’s house in Middleton Tyas).

And I know only too well where I was when we won the cup: in the upstairs flat I then rented in Uxbridge, watching on television a game the man in the downstairs flat had promised I would watch at Wembley.

My neighbour was the sports editor of the Harrow Observer, for which I was working. We both had company flats. And being sports editor of a paper with a sister edition covering Wembley, “knowing everyone you need to know”, meant getting me a ticket would be a cinch.

He kept up the mantra from a day or two after we beat Arsenal in the semi-final, throughout the build-up and until the eve of the game itself.

But that Friday night, all was silent from downstairs. My colleague was a noisy drunk with a combative wife, so this was unusual. They’d disappeared to their caravan in East Anglia (they later disappeared again, but more conclusively and he was not, as far as I know, seen again in the office. I doubt, though, whether guilt at the acute disappointment he’d inflicted on me had much to do with it.) There was, of course, no ticket.

Even my wife, whose view of football is a bit like mine on reality TV and talent shows, knows where she was when Ian Porterfield scored our winner. She was ambling back from the shops and had reached our street. She then heard an almighty roar, in a voice she recognised, from an upstairs window a little farther along the street. And very nearly went back to the shops.

Lance Hardy, a broadcaster and writer who edits BBC1’s Final Score, knows an awful lot about sport. He has covered World Cups, Olympic athletics and darts championships. He, too, watched the final on TV and includes thanks to his parents, for plonking him in front of the set with orders to shout for Sunderland, among his acknowledgements.

I have already started dipping into a book he has produced from generous access to the family of the late Bob Stokoe, our 1973 manager; Sunderland’s winning team (with the sad exception of Ian Porterfield, who is no longer with us); former Leeds players; footballers managed by Stokoe at other clubs; assorted TV colleagues; and fans ranging from Sir Tim Rice to Paul Dobson (Sobs of A Love Supreme fame) and our own Pete Sixsmith.

Before long, I will tell you what I think of it. In the meantime, you can at least be sure of one thing: it is a subject dear to the hearts of Sunderland supporters whether or not they are old enough to have been aware of, or present, at the game.

“It was something you couldn’t put into words,” Hardy was told by one of his interviewees, Bobby Kerr, skipper of the SAFC cup-winning side “I don’t know how you are going to do it, If you can do it, it could be a bestseller.”

The greatest cup final shock of all time? Maybe, maybe not. But the story deserved telling and I am looking forward to getting properly stuck into it.

* Stokoe, Sunderland and ’73: The Story of the Greatest FA Cup Final Shock of All Time. Published by Orion.

1 thought on “Sunderland, Leeds and Wembley 1973. Part 3: everyone knows where they were when …”

Next Post
Sunderland, Leeds and Wembley 1973. Part 2: ‘how I spoke to Rod Stewart and hung my scarf on the FA Cup’