Can you recall precisely where you were and how you found out about crucial final scores in the history of Sunderland AFC.

Obviously, the best answer is: “Yes because I have always been there.” I know of at least one writer for Salut! Sunderland and at least one reader who could probably make that response. Most of us, for a variety of reasons, cannot.

Sunday afternoon brings another such game. If the outcome duly decides our fate, it will be because we have beaten Southampton and stayed up – barring mathematical insanity in the remaining matches.

I am in in the UK so will not be at the Stadium of Light. My nerves will be as shredded, sitting in front of whatever stream I can find in the south of France, as those of any of the 40,000 or so inside the ground.

This is how I began my preview of the match at ESPNFC.com:

Yes, I know where I was when JFK and Princess Diana died – at a cinema in County Durham and in bed in North Yorkshire, respectively.

It is even easier to identify my whereabouts whenever Sunderland have been relegated in my lifetime. It never happened before my lifetime as the club was ever-present in the top flight until 1958. On many sad occasions since then, I have either been at the match in question or somehow in touch from far away.

On the night of April 22, 1997, I was at a Thai restaurant in London with my wife. Either she permitted me to keep tabs on Sunderland vs Southampton or I stole away briefly to do so. Such marital ruses have been known to occur. One way or the other, I discovered by dialling one of the ripoff lines that were a feature of the late 1990s that Sunderland had lost, 1-0.

That was not the actual moment of relegation. I was present for that, 2 1/2 weeks later, when — after brief respite with a resounding 3-0 defeat of Everton — the generally awful side that then represented the club succumbed to another 1-0 defeat on the final day, at Wimbledon (remember them?).

But I distinctly recall the realisation that Sunderland were probably doomed as I heard that scoreline from Roker Park. The Saints were also in trouble, but the win kept them up.

Later, I offer my innermost thoughts on our survival prospects – that we’ll just about stay up, though I take nothing for granted. I even allow for the possibility of a comfortable win provided we can strike early to settle those nerves on the pitch and in the stands. I stop short of predicting a Danny Graham goal – “I was about to add that surely [he] has to score sometime until I realised no one would take such a notion seriously” – but urge him to make me eat my words. 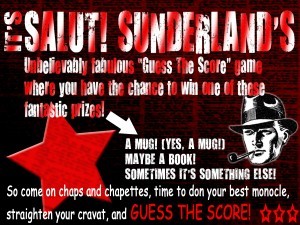 If you have not already had a go, Guess the Score at: https://safc.blog/2013/05/guess-the-score-as-safcsouthampton-stoke-fulham-aston-villa-newcaste-norwich-wigan-fight-drop/

AND CATCH the rest of the buildup:

* read the Southampton “Who are You?”: https://safc.blog/2013/05/the-southampton-who-are-you-draw-at-sunderland-and-skys-our-limit/