After the last edition of Pete Sixsmith‘s series on matchday programmes, and his memories of the games in question, I half-expected a riposte from a stray reader calling himself ‘Watford Gap’ or some such, along the lines of ‘you remember thumping us 5-0 at Roker; will your series be covering the programme on sale on Sept 25 1982, when we pulverised you 8-0?’ Wisely, Pete chooses instead to concentrate on another good day for the Lads – and for one immensely talented Lad. Check out Wikipedia’s description of Kieron Brady: “the skill and trickery he produced lives long in the memory of fans lucky enough to see him and he remains a cult hero among Sunderland fans who continue to marvel at just what a player he could have become but for a cruel career-ending injury”. And check out the clip …

So, here we are in the 1990s, yet another decade that had a series of ups and downs, highs and lows that go hand in hand with being a Sunderland supporter.

It started with Denis Smith in charge of a second level team, and ended with Peter Reid as boss of what was beginning to look like a very good top level side. The bits in between were made up of a fortuitous promotion, an FA Cup Final appearance, some dark days which almost ended up with us sliding back into the third level on two occasions and a heart breaking playoff defeat with what many fans regard as the most entertaining Sunderland side in living memory.

1990 was a good year for Red and Whites. Under Smith, we were making steady progress after our promotion from Division Three. The previous season had been one of consolidation and we were ready for a real go at getting back to the Promised Land.

A win at Swindon on the opening day, (news of which did not reach me in Greensborough, North Carolina until 24 hours after the game was over; no internet then), set us off to a good start. Paul Hardyman was the only “new” acquisition although Paul Bracewell re-joined, having been talked into it by his old Stoke team mate, Smith.

And that was pretty much it. Roker was crumbling, and there was little money available after the profligacies of the McMenemy era. Like all of Smith’s side, there was no room for shirkers and a large number of players made 30+ appearances – Bennett, McPhail, Norman, Armstrong, Gabbiadini and Gates being among them.

We had always been around the top end, but had hit a poor patch after Christmas with defeats at Hull, Middlesbrough and Plymouth and slipped to 10th after the eventual champions Leeds United (or Dorty Leeds to give them their full title) had beaten us on the Tuesday night before the Brady Game.

As a result, a meagre crowd of 13,896 turned out for what could well have been the last meaningful game of the season on March 24 1990. 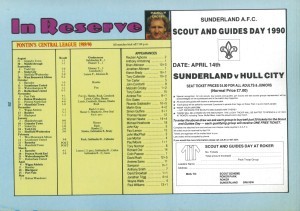 However, it provided a catalyst which eventually propelled us back into a play off place and gave us a glorious, wonderful win at SJP courtesy of Eric and Marco before we messed up at Wembley against Swindon.

The team that Smith turned out against the Hammers was not his strongest. Spennymoor-born Michael Heathcote replaced Gary Bennett and the experienced legs of Bracewell were supported by the younger ones of Armstrong, Owers and Brady.

Brady had made his debut in November in a comfortable home win over Plymouth, but had been used sparingly. Presumably, Smith was concerned about the lack of creativity in the side and the young Irishman came in in an attempt to outplay a good-looking West Ham line up.

He targeted George Parris, an effective but rather ponderous midfielder, and took him apart with a performance that had the loyal 13,000 purring with pleasure. Jimmy Quinn put the visitors ahead before Kieron levelled with a kind of overhead kick at the Roker End. And then, after Quinn had restored the visitors lead, we saw an absolute master class from Brady.

He was felled by Parris in the box, allowing Paul Hardyman to level from the spot and then there was run that ended up with a superb cross to Gary Owers who slammed it home to give us the lead. He continued to torture the Londoners every time he got the ball and they were so discombobulated by him that they refused to tackle Marco, allowing him to score the clincher.

It was a marvellous 45 minutes and we all thought that we had seen a great star arriving at Roker. Alas, injury robbed us of a player who is still talked about in hushed tones by Red and Whites over 30; Michael Gray described him as the most gifted player he has ever seen. Many would echo that.

The programme now cost us ten bob in old money, and was a handy pocket sized one. Rob Mason was writing for it, contributing a report on our 1-0 win at Bournemouth the week before (Gabbiadini, 51), while there were the usual pen pictures of the visitors – including Liam Brady who also full of effusive praise for his namesake after the game.

Club sponsors Vaux were pushing Labbats Lager (“Malcolm the Mountie – he always gets his can”); if anything, the beer was worse than the advertising copy and a company from Haswell was advertising a trip to Italy for the World Cup at £349.99 for 18 days and 16 nights, with tickets for the England group games on Sardinia. 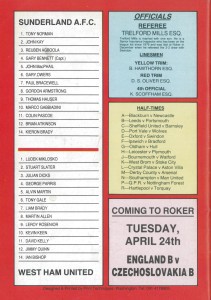 The goalscorers’ list showed Don Goodman banging them in for West Brom and Steve Agnew chipping in with a few for Barnsley. Leading scorer in the Division was cheerful, much loved Mag, Mick Quinn, the man who looked more like Bob Carolgees than Bob Carolgees did, with Marco in third place after someone called Shearer at Swindon Town. Panic ye not – it was Duncan, not the great fence creosoter.

The whole season was a strange one and wasn’t decided until June 13 when the FA ruled that Swindon had fiddled the books and we were promoted instead of them. As usual, we wasted the opportunity by buying sparingly in the summer (Davenport and Ball) and in some cases badly (anyone remember Brian Mooney – thought not). We went down on the last day of the season at Maine Road with the best away following ever.

But Kieron Brady was a pleasure to watch – and I was most definitely there.

Credit to Davey Bell for this clip.

Next Post
Salut! Sunderland Podcast: a look at the summer signings so far