Gus Poyet has every right to be fuming with referee Kevin Friend after today’s game at the Britannia Stadium. Of course Friend has form having shown red cards to Lorik Cana, Lee Cattermole and David Meyler (in the same game) but none could be harsher than that which was shown to Wes Brown this afternoon. It was a game changing decision which made it harder to come back from the 1-0 deficit, his side had conceded just minutes previously. Here, in his post match e-mail to M Salut and a few others is how he diplomatically expresses his thoughts. 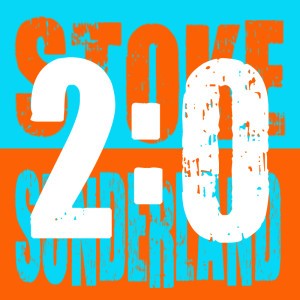 I thought that we were much better, in terms of passing the ball and trying to create problems. The team that I have been wanting to see were there and then there was the sending off; it is difficult to accept. There are lots of opinions already on the sending off, it’s national news. I don’t understand it to be honest with you.

I just want to have a normal game away from home and be able to compete and get points on the board. I feel bad for the fans; they travel so far to back their team, believing in what we are doing and then they find themselves watching a team of 10 against 11.

Valentin [Roberge] wasn’t in the squad last week because he was injured, today he was on the bench and then we called upon him after 40 minutes. He showed that he was ready today and if he plays like he did when he came on he will be a very important player for us. It’s a great credit to him for taking the opportunity to show us what he’s capable of doing.

Before Stoke scored, [Steven] Fletcher had a massive chance to put us in front, one of the best we’ve created so far. When you pass the ball and you believe in the game you are playing and make it difficult for the opposition, you will create more chances. Even with 10 men there were spells where we were dominating the game, I’m very proud of the players. Maybe we just need that extra bit of luck in games – a lucky goal or something to go in our favour – and the sooner the better so we can win games.

It’s important that we keep working on things and try to improve as a whole squad.