Pete Sixsmith was scathing at half time. Borini’s goal was a lifeline, he declared, but overall it had been very poor. That was probably him being charitable. A much, much better second half might have produced three points which would have enraged Southampton fans who had assumed their side was heading for the simplest of away wins. Pete delivers his considered assessment …

The search for a third home win of the season goes on and the longer we fail to get one, the harder it is going to be to escape the trapdoor that leads to Bournemouth, Bolton and Boro.

This could have been the one that really kick started our season, against a Southampton side that had suffered a far bigger Italian loss than we had during the week. Cortese brought Pocchetino, Di Fanti brought Di Canio. Saints 1 Mackems 0 on that score.

They have had a good season so far, winning at Liverpool and taking a point off Manchester City (my tip for the title) and have a reputation for playing good football. They can slip up – they are the only team that Di Canio took a point off this season and, with a better referee, we would have had all three – but they look like a club on the up.

So, a draw after being 2 down in the first half hour could be seen as a positive, a step forward as we reeled in another point in our quest to keep away from Watford, Wigan and West Ham next season. And I suppose in some ways it was. But it certainly didn’t feel positive at 1.15 as the second goal went in.

Bloody stupid time, 1.15! I should be just leaving Sixsmith Towers to drive through to Sunderland at that time, not sitting in Row 30 with my head in my hands as our defence gave a passable impersonation of the zombies in Shaun of the Dead by refusing to move at anything other than zombie pace.

Heaven only knows what time the poor Saints fans had to leave Hampshire to get there for the kick off. Bob Chapman left Bedford at about 7.00 and must have thought that that was a spectacular waste of time. 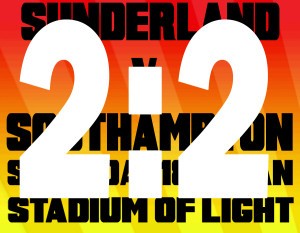 Like me, he queried the team selection, wondering why there was any need to change a winning team. Pete Horan, a wizened veteran of many disastrous Sunderland line ups over the years (Gary Bennett on the left wing at Barnsley, Reuben Agboola centre half in a 3 man defence at Blackburn, Ji Dong-Won coming on at Southampton) said that if we played any 2 out of Cattermole, Larsson and Gardner in midfield, we would lose. How right he was.
Cattermole is first up after the kind of performance that made me want to go and beg Brighton and Hove Albion to accede to Liam Bridcutt’s transfer request. I have no idea what kind of player he is and whether he would hack it in the Premier League. I do hope that he would not petulantly hack at an opposition player as Cattermole did to Jay Rodriguez.

It looked like the action of a player who may well know that his days at Sunderland are numbered. Some referees would have sent him off for it. Chris Foy gave him the benefit of the doubt. That one action convinced me that Cattermole’s negatives far outweigh any positives that he brings to the team. I can’t see his agent talking terms with Margaret Byrne this summer.

Seb Larsson is a decent player who, over the three years he has been with us, has always done his best. That his best may not be good enough is up for debate, but he struggled badly in this game and he is another one who will be looking for new employers next season.

He seemed to lack any urgency and energy before he was replaced by the third member of Horan’s Triangle, Craig Gardner, who showed both and played much further up the pitch than Larsson had. The added bonus of him being up there was that he was rarely in our penalty are, thereby reducing by 500% the chances of us giving away a penalty.

The first half hour was spectacularly awful and at 2-0 down, we should have been out of it. Both goals were shockers with our “defence” looking on as Rodriguez and Lovren scored with consummate ease.

No attempt to close Southampton down for the first one, allowing the exotically named Burnley lad to play keepie up in the box before slamming the ball home. The second showed how slow Wes Brown can be when he starts as badly as he did here – his attempt to get to the ball before Lovren was about as late as the average Arriva bus.
Brown had a very poor game by the high standards that he sets himself. Did he miss his Saturday morning lie in?

Had Mrs Wes done something to upset him? In fact, the whole team was out of sorts and looked as if they would rather be anywhere than doing their extremely well rewarded job. Even the head coach looked in a strop. Clearly Steven Fletcher had decided to do his warm ups in the gym rather than catch the lethargy bug that swept through the team.

The bug was killed off by Fabio Borini’s goal, which incredibly brought us back into the game. Adam Johnson’s excellent pass was well controlled and expertly clipped past Boruc as the Saints defenders gave a passable imitation of Brown and O’Shea.

It at least gave Poyet something positive to think about amidst all the negatives that he had seen in the opening half and we did play better – it would have been difficult to have played any worse. Johnson deserved the equaliser for another very good performance and who knows, he may well be joining the very accomplished Adam Lallana on the plane for Manaus in June.

Gardner played a significant part in that goal moving the ball along to Johnson and could have given us all three points if he had hit his shot harder a few minutes later. That’s not to detract from a good half hour which may restore his confidence and enable him to play a crucial part in our attempts to fend off visits to Charlton, Cardiff and Crystal Palace next season.

Gus got the selection wrong and he knew it. Colback and Gardner gave us more bite and edge and that will be needed as we negotiate the next batch of home games. Beat Stoke, Hull and West Brom and we are in with an excellent chance of avoiding the drop.

I hope the players and management have more confidence than some of the crowd. The first communal moan came in the third minute as we failed to clear the ball and continued throughout the first half. It can’t help and although I understand the misery that has been heaped upon us for the past few seasons, getting on the players backs rarely helps.

Even when we levelled, there was a subdued atmosphere which tends to help the visitors. Any coach who has done his homework will know that the crowd will be at the team early on if things go wrong.
Pottechino did his homework on us and made sure that we were never allowed to play the slow build up that we prefer. Johnson had four men around him whenever he got the ball, Ki was tackled quickly and effectively and they seemed happy to let Cattermole have the ball, knowing that he would give it away.

They played some very smooth football in the first half and really should have been out of sight – Lambert and Rodriguez missed two good chances – but they tired towards the end and that gave us opportunities which we took.

There are some exceptional young players there. Both Shaw and Chambers looked prospective international full backs while Lallana (who I saw at Hartlepool four years ago) was always comfortable. Their best player for me was Steven Davis, who was always available to take a pass and, when he got it, never wasted it His career has been at middle ranking clubs like Fulham, Villa and Rangers, and he appears to have found a good home in the Southampton midfield.

John Penman, a good friend of this column, was at the game with his ten year old daughter, Hayley. As Southampton ripped us apart with a passing movement that ended up with them nearly scoring, she turned to her long suffering dad and said “Are they allowed to do that?”

John Penman, a good friend of this column, was at the game with his ten year old daughter, Hayley. As Southampton ripped us apart with a passing movement that ended up with them nearly scoring, she turned to her long suffering dad and said “Are they allowed to do that?”

Next Post
Poyetry in Motion: credit where it’s due after Southampton draw?