Colin Randall writes: from my position just in front of the disabled Sunderland fans’ section, I could spot pre-match drinking companions: Pete Sixsmith and Sobs down a bit to my left, Bob Chapman down a bit to my right and the Wood brothers directly ahead a few rows down. Ian Todd, creator of the SAFCSA London branch had been in cheery mood in the concourse before kickoff. The players warmed up near the Sunderland contingent and acknowledged the support. Everyone was in good spirits. Then, it all went wrong. The game kicked off. Sixer wishes they hadn’t bothered …

As always, the trip to Ashburton Grove was an enjoyable experience. I do like visiting the home of bourgeois football, with bagel stalls, well turned out spectators and an atmosphere of “let’s sit back, enjoy the footy and pretend to be a real football crowd”.

It is certainly very different from the old days at places like Boundary Park, Meadow Lane and Ayresome Park, all three raw and cold with the aroma of fried onions, Bovril and beer wafting over the not always green sward on which the drama was enacted.

Arsenal left one iconic ground with its marble halls and awful sight lines for visiting fans and built another one, equally iconic and far better suited for Monty and Rupert. It sets standards that any other major club considering a new build will have to at least match and it makes the identikit stadiums at the likes of Leicester, Derby and Hull look positively second rate when comparisons are made – as boring people like me are want to do.

Monsieur Salut is a huge fan of M Wenger, placing him above even Alan Brown in the pantheon of great managers. I too admire him, more so recently as he appears to have desisted from looking down his Gallic nose at the less refined clubs in the Premier League – ourselves, Stoke City, West Brom – and accepting that the strength of English football is the number of provincial clubs that draw support from their own communities rather than from far and wide.

Banners around Ashburton Grove spoke of fans’ groups from Singapore, Indonesia and Poland, but none from Holloway, Hornsey or Highgate and the array of languages spoken in the area around this splendid hump-backed bowl suggested that Arsenal was an important stop-off on the tourist trail in London.

It was a good trip down with the sun shining all the way and plenty of seats on the coach. There was much discussion about where people were stopping next weekend, which pubs were being frequented and so on. The most enjoyable part of the journey is the run from Archway to Holloway Road, passing the array of shops, cafes and pubs that make up these thriving communities and comparing them with my home town which more and more resembles a backwoods town somewhere in the Balkans.

The Lamb in Bloomsbury was another enjoyable experience – apart from the prices. Some of those down for the Wembley weekend blanched at the £4 a pint charged and decided that Wetherspoons would be a good option for some of the Wembley weekend sessions.

Wood Major and Minor were there along with Mr and Mrs Smart, Sobs and Young Lee (looking well after a difficult couple of years with illness). M Salut arrived as did Bob Chapman and the ale and the conversation flowed as it always does in this excellent pub. 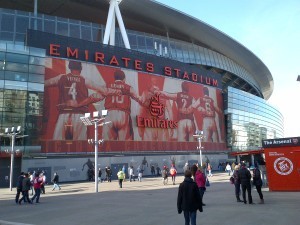 A brisk walk to Russell Square station, tube to Arsenal and then into the stadium to see that (Brown apart) Poyet had selected the same team that had won at The 03 Arena three weeks ago. Brown’s replacement was Santiago Vergini, who had looked comfortable the previous week against England’s centre forward.

He didn’t against the French equivalent. The first five minutes reminded me of those days down at the rec’ when the King Willie Lads would come down and take your Frido ball off you and invite you to get it back off them. M Salut and I had no luck then and the team we support had a similar experience on Saturday.

Giroud put his matrimonial problems behind him and did what he does best, putting the ball in the net to finish off a slick move.

We then managed to gain a foothold in the game and at least got into their half and almost had a shot or two. And then it all fell apart.

Arsenal’s third goal was a thing of beauty, finished off by the excellent Tomas Rosicky, after a series of passes and flicks that showed our pedestrian players up for what they are – Premier League makeweights. Rosicky was the best player on the field, gliding over the turf and prompting all the time. What clubs like ours would give for an artist like him.

The second half was a no contest. Koscielny thumped a header in after poor Santiago had almost sliced the ball into his own net and we managed a good goal from a busy and reasonably effective Emmanuelle Giaccherini. That was a (very) slight positive to take from the day – he played well and we didn’t give up. Not much to shout about there, is there?

Some players looked as if their minds were on the League Cup Final next week. Marcos Alonso looks a shadow of the player he was a few weeks ago while John O’Shea is clearly missing his old mucker Wes in the middle of the back four. Any thoughts of Vergini gracing Wembley were discounted by his performance; he made Kyrgiakos look good on this performance.

For Liam Bridcutt and Jack Colback here was a reminder that not all midfields are as supine as the Mags’ was three weeks ago. Johnson and Ki were hardly in it and Johnson departed at half time. Borini switched to the middle when Altidore was withdrawn at the same time; there is a feeling that the Italian will play through the middle on Sunday. Altidore is clearly not good enough and was likened to Andy Kerr on the way back – and at least The Bomber binned him after 10 games.

The other results were not disastrous. Cardiff look dead in the water and West Brom and Fulham seem to find wins very hard to come by. Throw Crystal Palace and Norwich – who inconveniently beat Spurs – into the mix along with us and it is two from five. We have home games that must be won; the way we are going we will probably beat Everton and lose to the rest.

And so, we head to our first cup final appearance since 1992 against the richest club in Manchester. They are not in great fettle at the moment, struggling to beat Stoke and being well beaten by Barcelona. No doubt they will see the League Cup as their Holy Grail and will fight like lions to keep it out of our reach. We shall see.

Here’s a painful reminder of what he was capable of:

Next Post
Dozing, dozing Arsenal’s Montys and Ruperts came to life for Dennis