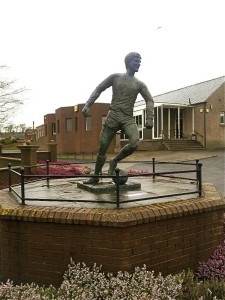 Pete Sixsmith will be at White Hart Lane for a night most of us face with a gloomy sense of the inevitable. So he made sure he had a decent weekend first and refused to let it be ruined the small matter of a postponed football game …

For those whose lives have been incomplete since I set the poser on Friday, the answer is Jim Baxter.

Born in Hill of Beath a couple of weeks after Britain declared war on Germany, he was probably the finest player of his generation. He would have made Ronaldo and Messi look like Northern League carthorses with his silky skills and his irreverent approach to the game. He could pass, shoot and tackle, often all at the same time. And when it came to drinking, there were none better.

Or perhaps I am looking at this through the rose tinted glasses of the past. He was an outstanding player with his best years behind him when he came to Roker Park. His leg had been broken in a fierce European Cup clash with Rapid Vienna and he was never really right after that. His home debut saw him score a wonderful goal against Sheffield United and impressionable teenagers like me were hooked.

Like many a Sunderland player, his career never really took off on Wearside and he moved on to Nottingham Forest and then back to Ibrox before retiring and drinking and gambling his money away. A liver transplant failed to halt his decline and he died in 2001, a ruined and broken man but one who left a lasting impression on millions of Scots and Mackems in the 60s. His “keepy-uppy” as Scotland won 3-2 at the home of the World Champions in 1967 is the stuff of legend.

As it happened, I was met by John Penman (oft of these pages and father to budding journo Hayley) at Rosyth station with those awful words “The match is off, waterlogged pitch”. A quick drive up to Hill of Beath to take a photo of the great man’s statue was followed by a ride through the country lanes of Fife and Clackmannanshire to the small town of Sauchie, on the edge of Alloa, for their MacBookie Super League game with Ballingry Rovers.

Beechwood Park was a pleasure. It had a proper turnstile block, had a match programme and a lovely mother and daughter team staffing the tea bar. The Scotch pies were warm and the rain had stopped. Perfect.

Both teams are in the bottom half of the league with Ballingry struggling to avoid relegation. Sauchie had gone out of the Scottish Junior Cup in an epic tie with Camelon which John had witnessed. The highlight of that game was a spectacular rammy (see how I lapse into the vernacular) between the Sauchie right back and the Camelon manager which made Pardew v Meyler look like a vicarage tea party. Result; two bookings and a hand shake and nobody treating it as if it was the end of civilisation as we know it.

The first half was fairly even with Sauchie having a good goal chalked off for offside, much to the anger of the home support. At half time one of them announced that the ref (who I thought had a good game) was a “f****** polis”, there were murmurs that we should expect nothing better.

One easily recognisable player for the home team was Collin Samuel. A contemporary of Kenwyne Jones, Dwight Yorke, Stern John and the wonderful Carlos Edwards, he has played for a number of Scottish teams and I saw him at East Fife a couple of years ago. His long dreadlocks and his World Cup pedigree mark him out at this level and he started well before fading on a heavy pitch.

As did Ballingry. The feeling was that they would subside if Sauchie scored and they did, conceding a further three and looking like relegation fodder. Three go down of which one, Tayport are lost off, but on this performance, Ballingry will be in the Eastern Premier next year. Believe me; I know a relegation team when I see one.

Train back to Edinburgh, a pint in Mather’s Bar, where I had a “conversation” with a local who had lived in Stoke and proclaimed it the dirtiest town in Western Europe and then a comfortable trip home on the state run East Coast Main Line. At Newcastle, disconsolate Mags got on but I felt it was wiser to say nothing.

And so to Spurs. Win it and a shudder will be felt in West London and Norfolk. Norwich look vulnerable, capable of beating us but nobody else. It could be any three from five, which gives us a 60 per cent chance of going down. However we need to win. As bad as Spurs look, they are surely not that bad.

4 thoughts on “Sixer’s Travels: where on earth is Sauchie and who was Slim Jim?”

Next Post
Sixer Says: another week, another mess and now we go to Spurs