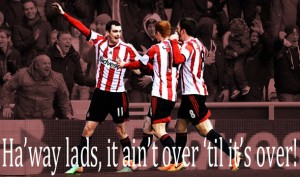 Pete Sixsmith has declared Tottenham on Monday night to be his last away game of the season. If, as seems likely, we lose, it may as well be Sunderland’s, too. Sorry to be so downbeat; it’ll all seem better when we’re banging in goals for fun and winning games galore in next season’s big promotion push. And who knows? Wouldn’t it just be so typical of SAFC to win at Spurs and then go down because Cardiff call successfully for a points reduction over the Ji affair. The Ji affair? Let Pete continue …

When the final history of Sunderland AFC comes to be written (round about 2025 at this rate) the week we have just lived through could well prove to be a turning point.

Not content with playing like drains against West Ham United, the club then got itself into a bit of a pickle over selecting a player who was not actually eligible to play for us. Oh dear.

Enough has been said about the disappointing showing on Monday night. For many, it was the realisation that we are not actually very good. Not good at signing players, not good at picking teams, not good at defending and not good at opening up a defence to give our forwards a chance to score. And when we do, not good at drilling the ball into the net.

On top of that, we don’t seem very good at administration. That the Premier League have fined us a considerable sum of money for not ensuring that Ji Dong-Won had been cleared to play in England after his spell in the Bundesliga shows us that Sunderland AFC may not be, in the current parlance, “fit for purpose”.

It is the kind of error that really should not be made and is now placed alongside the failure to get Dominic Matteo to sign his loan form in 1995, something that could have sent us into Division One. That we only gained one point from the games that Ji played for us does little to assuage the fact that, once again, our administration was found seriously lacking. I can’t imagine George Crow or Ron Linney making such a blunder.

Now, there will be clubs around us looking carefully at the decision that has been laid down. I imagine that they have known about this for a while, but the public revelations will have the owners of Fulham, Cardiff, Palace West Brom and Norwich seriously considering a request that the one point we gained during the games that the wretched Ji played for us, be taken away.

The relevant Premier League rule appears to make an allowance for mistakes of this nature in that it does not specifically mention a points deduction, but the FA Rule that applies to those leagues that are covered by the FA generic rules, ie, those below the Football League, does allow a points deduction to be made.

Indeed, Marine lost three points when they signed a player who had been playing for Colwyn Bay. The Premier League could have passed our case to the FA, in which case we would undoubtedly have had a point’s deduction – probably three.

Catch up on the Spurs v SAFC buildup by browsing the home page: https://safc.blog

Not that it matters much as the chances of us getting out of the relegation zone are becoming less and less likely. Spurs should be another difficult Monday evening for us as their collection of overpaid and underperforming players will be keen to make up for last week’s inept performance at Liverpool. And their o’s and u’s are far better than ours.

Aidan Kerridge put an excellent post on our Facebook page where he invited us to decide who was to blame for this shambles – De Fanti, Di Canio, Poyet, O’Neill, Bruce, Short, the players. My view is similar to that put forward by Christopher Clark in his book The Sleepwalkers.

That’s not about our defence, but the definitive account of how the European powers blundered into war 100 years ago. Unlike M Saluts’ old boss Max Hastings and our wonderful Education Secretary, Michael Gove, Clark does not heap all the blame on the Kaiser and Germany. He apportions blame on all the powers, looking at all the little things that happened to make some kind of war inevitable.

And that is why we are in the state we are in – a combination of things has eventually laid us low and looks certain to confine us to the Championship – and there is little likelihood of an immediate return. Wolves could be the model we follow.

Saturday will see me in the company of John Penman watching Hill of Beath play Musselburgh in an East of Scotland Super League game. The old pit village is the birthplace of a Sunderland player from the 60s. There is a statue of him outside the Miners Welfare Hall. No prizes for guessing who it is.

19 thoughts on “Sixer Says: another week, another mess and now we go to Spurs”