Forget the Man Utd old boy nonsense. Phil Bardsley may be a Salford lad, a United fan and a player who’d give his right arm to have had a proper Old Trafford career. But he was barely part of the playing set-up – eight appearances in five years. Until this week’s move to Stoke, he has effectively been Sunderland and Sunderland alone, with a commendable 200 games, seven goals (some of them spectacular and rather important) and just a few loan spells, all pre-SoL, at Rangers, Burnley, Villa and Royal Antwerp, to modify the impression of a solidly one-club man…

Bardo leaves with warm wishes from Salut! Sunderland. He was occasionally a chump, especially during the wretched PDC reign, but he was also a player of the season, acclaimed by the fans for his passionate embrace of the SAFC cause. Like Craig Gardner, he is not the most skilled player you’ll ever see; also like Craig, he is certainly among the most wholehearted.

Here are extracts from a piece I wrote about him at ESPN after he had regained his first-team place and showed himself to be a worthy member of the squad:

Back in October, just after Gus Poyet chalked up his first victory as Sunderland head coach — the team’s first of the season — I wrote that two of Paolo Di Canio’s forgotten men had played significant roles.

That match was against Newcastle United at the Stadium of Light and those players were Lee Cattermole and Phil Bardsley, both of whom made strong contributions to a victory that was won with a magnificent late strike by Fabio Borini.

The Italian, a loan signing made in the short-lived Di Canio era, started making his presence felt after PDC had left the club and the three points were secured that day by a telling combination of old guard and new world.

Three months on, a similar mix was on display as Poyet’s increasingly buoyant side romped to victory in the return match at St James’ Park on Saturday.

Every member of his team deserved credit for a superb collective display but, once again, Borini scored and Bardsley caught the eye. It was his surge into the Newcastle penalty area, after a delicate lobbed pass from Adam Johnson, that led to a foolish Vurnon Anita challenge and Borini’s cool opener from the spot-kick that followed… 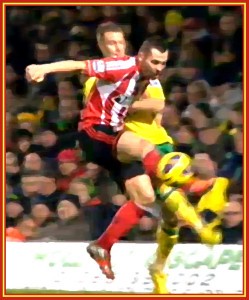 … Bardsley’s recent form has played far more of a role in Sunderland’s revival than is often suggested. It is not so long since he was frozen out of the first-team squad by Di Canio, who was rightly angered by off-the-field faux pas, if characteristically intemperate in his public rebukes.

The full-back spoke openly about having no future at Sunderland. Had he not been injured playing with the development squad, he would almost certainly have been moved on, perhaps to Fulham.

Instead, he recovered, fought his way back quickly — too quickly, if his showing in the 4-0 defeat at Swansea in Poyet’s debut was a reliable test — into the team.

But having regained his fitness, rhythm and pace, Bardsley has been a revelation, with gutsy defending and bright, menacing forward play. He has scored vital goals — including the winner at home to Manchester City — and gone close or created chances on numerous other occasions. His attacking role has been a factor in the revitalisation of Johnson on the wing.

This is the sort of form that brought Bardsley a player of the season award under Steve Bruce in 2010-11. He has overcome formidable obstacles; my own sharp criticisms of him were like gentle taps to the wrist compared with the public floggings administered by fans outraged by his Instagram message mocking the opening-day defeat at home to Fulham, an act of stupidity that brought him a two-week suspension.

Even if we put that incident out of our minds, and forget the silly prank when he was photographed lying on a casino floor covered in 50 pound notes, it is fair to say doubts have also been raised about Bardsley’s abilities at the Premier League level.

But he is a dogged player who never shirks a challenge. He can cross and he can shoot. It ought to be remembered he is also essentially a one-club player; despite the routine “Old Trafford old boy” description, he played only eight times for Manchester United and managed just 46 games in a long procession of loan spells before making the first of 167 appearances, so far, for Sunderland.

So I am delighted with his rehabilitation. Everyone deserves a chance to redeem himself and Bardsley has taken his in exemplary fashion. It is a measure of the change that when Fulham again seemed to be sniffing around towards the end of the transfer window, my own feeling was one of relief as the deadline passed without a move. Last August, I’d have chipped in with a few coins to help him on his way.

Next Post
The WAY awards: tension mounts as Hull, Norwich and Manchester United lead the pack