Grant Tunkel‘s reports from the other side of the Atlantic, chronicling the pride and joy inspired by USA performances at Brazil 2014, have given a valuable extra dimension to our World Cup coverage. Before he reverts to writing as an American Sunderland supporter, here – delayed by his own sporting commitments (he had a game immediately after the Belgium match) – are his thoughts on a noble exit …

Belgium, however, got the better of the United States — in every facet of the game. Belgium were better during the run of play, on the stat sheet and, most importantly, on the scoreline.

Tim Howard’s magical number from Tuesday was 16, as in a World Cup-record setting 16 saves. The number, however, was 2-1 — as in Belgium 2, United States 1.

The dream denied for the Red, White and Blue.

But soccer (yes, soccer) isn’t a sport where the man between the pipes can mask deficiencies in front of him. Hockey is that sport, and the narrative has been written time and again: A hot hockey goaltender can carry a team to a championship almost by himself.

That narrative is rarely written in soccer.

So when Howard was called upon in the very first minute, I knew it would be a long day. When halftime finally came, I started looking ahead to penalties.

In the 50th minute, I turned to a friend. Only 70 minutes to penalties, I said. Can we hold on? Seven minutes later, at a stoppage, another friend said: “See, look, seven minutes have passed. Only an hour or so till penalties.”

Regular time ended and, lo and behold, there were only 30 minutes until penalties.

But then it all came crashing down.

The lack of possession in the midfield, the absence of a quality breakout pass to spring an attack, the lack of quality finishing (more on that in a moment) — these are things Howard, and no keeper in the world, can overcome for more than 90 minutes.

So De Bruyne and Lukaku scored and the mid-extra time whistle came and it was over. Completely and utterly over.

And then the Americans launched 15 minutes of mayhem. Julian Green scored a wondergoal, Clint Dempsey nearly pulled off the set piece of the century. The statistics were remarkably lopsided over the final 15 minutes: 65-35 in possession, 5-2 in attempts. All in favor of the US.

But it still wasn’t enough.

The World Cup run was over.

I won’t blame Michael Bradley, a popular target here in the US for what some perceive to have been a lackluster performance in Brazil.

I won’t blame Chris Wondolowski, who missed a golden opportunity in the waning seconds of regular time that would have won the match.

I won’t blame Jurgen Klinsmann for turning to Wondo instead of Jozy Altidore, who clearly wasn’t as fit as the coach made him out to be. (If he were fit, Jozy would’ve played. Plain and simple. Perhaps Klinsmann declared his striker ready only as a tactical move. Who knows? But I doubt Jozy was well and truly fit; if he was, he’d have come on in the second half.)

I won’t place any blame. But I will say this: The US beat Ghana and dominated Portugal. They escaped the Group of Death and reached the Round of 16 in consecutive World Cups for the first time ever.

The US took Belgium, a world power, to the absolute last minute.

I won’t brand this run a rousing success, because settling for one win in four matches and a Round of 16 elimination will bring about complacency.

For now, we’ll have to settle for 15 wild minutes and a historic performance for the ages. The stuff of legends, and perhaps one day, the stuff of champions.

* NB: apart from making punctuation conform to Salut! Sunderland’s style, we do not tinker with US English usage when the writer is American. Soccer we all know; hockey, for those unsure, means ice hockey. 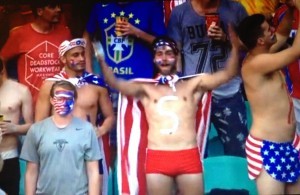 1 thought on “USA exit Brazil: no dream Jozy return but the stuff of legends”