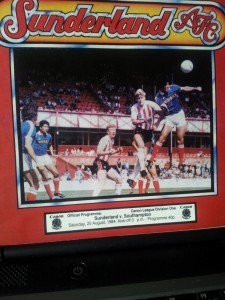 Pete Sixsmith continues his series of knowledgeable retrospective glances at opening games of seasons past in over a half-century of supporting the Lads. Southampton supporters may also enjoy nostalgic relief from the astonishing goings-on down on the south coast, where their club appears to have been taken over by madmen (or women) …

Anyone remember Geoff Triggs? No, neither do I, but he was the SAFC programme editor in 1984, the Rob Mason of his day. Whereas Rob is renowned for producing a programme that engages with most of the fan base and regularly wins awards, Geoff’s opening effort for the 1984/85 season conspicuously failed to do either.

In his notes, he posed a set of rhetorical questions. “Has the manager made the right decisions? Will the old faces be missed? Will the new ones blend in? No one can tell,” said the oracle of Roker Park, but he did go on to say that “there would be moments of jubilation and despair”. The programme contained no great evidence of proof reading.

Of course, we can answer the questions posed now – hindsight is a great thing.

So, did the manager make the right decisions? The manager was Len Ashurst, who had returned to Roker in March when Tom Cowie decided that Alan Durban was not going to take the club forward – in fact, Cowie thought he may well take it down. We survived that season thanks to a last day win at Leicester which propelled us to the giddy heights of 13th and gave some optimism for the coming season.

Not that there were many fans attending to share the optimism. The highest crowd we had all season was 25,646 on Boxing Day, when prospective league champions Liverpool were visitors while the lowest was 11,612 when our old friends from Coventry came calling. The highest away gate was 40,615 at Old Trafford while our visit to Molineux drew a paltry 9,111. England had truly fallen out of love with the beautiful game.

So, what decisions did Lennie make? Out went Ian Atkins, Leighton James, Rob Hindmarch, Pop Robson and Lee Chapman and in came Garry Bennett, Steve Berry, Howard Gayle, Clive Walker and guitar playing Rodger Wylde. Were they the right ones? At least they were signed before the season started – no transfer window or agents in those days.

On the evidence of the opening game, yes they were. All bar Wylde played against a Southampton side, managed by Lawrie McMenemy and future SAFC man Reuben Agboola. The Famous Four alongside home grown products like Barry Venison, Gordon Chisholm, Shaun Elliott, Nick Pickering and Colin West, with Chris Turner and Mark Procter making up the XI. Wylde sat on the bench and his services were not required as 18,152 revelled in the Sunderland sunshine and a 3-1 win. 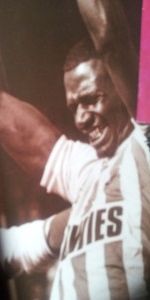 The scoring was opened by Gary Bennett, a player of whom we knew little other than he had worked with Len at Cardiff and that his brother was a decent turn at Manchester City. I think that all of us were impressed when we first saw him. He was big and strong and looked the part. Lennie got that one right.

He had almost missed out on Benno as he went to talk to the Crystal Palace chairman, Ron Noades and almost penned a deal at Selhurst Park. However, Barry Batey (remember him!) called him and said Sunderland wanted him and if the fee agreed by the tribunal was acceptable, he would become a First Division player.

It was, he did and he went on to become one of the most popular and well respected players in the clubs history. He signed at a time when black faces were not common in the North East and must have wondered in those early days if he had made the correct decision. The fact that he is still here 30 years on suggests that he did.

His goal came in the third minute of the game. He was lurking on the edge of the six yard box when the ball bounced to him and he lashed it past Peter Shilton to get our season and his Sunderland career off to the best possible start.

By half time, Barry Venison had doubled the score and the mood in the Clock Stand paddock was positive. Even though David Armstrong (a Sunderland supporter from Belmont) pulled one back, his old Middlesbrough teammate Mark Proctor wrapped it up to start the season off with a bang rather than the usual whimper.

It is interesting to note that of the 24 players involved, 21 of them were English. We had one Scot in Gordon Chisholm, while the Saints had Joe Jordan making his debut and Welshman Alan Curtis on the bench. Those were the days.

Sports Report on the way home told us that we were a better side than Liverpool, who had drawn 3-3 with Norwich City, and almost as good as Spurs, who had won 4-1 at Goodison. By the end of the season, Everton were champions, Spurs were third and Liverpool second. Norwich beat us in the Milk Cup Final at Wembley and were relegated alongside us and Stoke City. A campaign that had started with such promise ended up a disaster unparalleled in Sunderland’s history. We managed 11 points from the last 17 games.

And of the new boys? Three of them went in 85-86. Walker left in November ‘85 for Millwall, Berry played once and left at the end of the season, while Gayle flickered intermittently and did well at Blackburn Rovers. Wylde only lasted until November ’84. He came back to haunt us a couple of years later when he was at Barnsley.

Benno stayed and now passes on his observations on the club as he sits alongside Nick Barnes as part of the BBC Radio Newcastle team. Was his move a success? Definitely so!!!