Now then, this is a warts-and-all series about opening games of the season and Pete Sixsmith cannot just pick the tastiest cherries. There were some matches that would question anyone’s commitment to football and the visit to Ashton Gate in 1994, the start of the season in which Peter Reid arrived late to save our bacon, was one. 11,126 other souls turned out to see two teams that would finish 20th (us) and 24th. The National Media Museum photograph of Brunel’s magnificent Clifton Suspension Bridge may ease the pain a little … 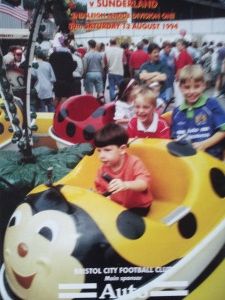 https://safc.blog/category/fifty-years-before-the-red-and-whte-mast/“>Fifty Years Before the Red and White Mast: Bristol City (a) August 13 1994

Twenty years ago, message boards and websites were very much in their infancy- indeed, for all I remember, they may not have existed at all. Had they been available, there would have been a meltdown as Sunderland, under the ownership of Bob Murray, was on its uppers.

The manager was Mick Buxton – Whippet Mick – a man taken to wearing flat caps and speaking with an accent closer to Roker Park than Gustavo Poyet’s Montevideo twang.

Born in Corbridge but brought up in South Shields, he was a Sunderland fan through and through, although that didn’t extend to him letting us win at Scunthorpe United in the FA Cup in 1987 when he was managing The Iron. He had a good reputation as a coach, had done well at Huddersfield and Scunthorpe and came in as caretaker manager after the inept Terry Butcher had been sacked following a home defeat to the mighty Shrimpers of Southend.

What little money the club had in those dark days had been spent by Butcher on the likes of Alec Chamberlain, Derek Ferguson, Phil Gray, Andy Melville and Ian Rodgerson. Buxton and his coaching lifted us from 20th after Butcher left to a respectable 12th at the end of the season, and he was given the poisoned chalice on a full time basis.

He brought in no new players in that summer. Can you imagine that? None; zero; zilch. RTG would explode in frustration, Total Sport would be awash with vitriol of the greenest kind and there would be demonstrations outside Roker Park demanding an end to this sort of thing.

It shows how football has changed. This was the third season of the Premier League. It still had 22 members including the usual suspects but also embracing the likes of Coventry City, Ipswich Town and Wimbledon. It was showing the potential to be the cash cow that it has now become, but stadiums still had standing areas and prices were relatively low.

Coming into this season, Blackburn Rovers were the big spenders, lavishing the then huge sum of £5m on Norwich City’s Chris Sutton. That was a British record fee – about what would be paid for a promising English player now.

The likes of Eric Cantona, Jurgen Klinsmann and Niall Quinn were scoring goals and, in the case of Cantona, drop kicking opposition fans. At the other end, Phil Babb at Liverpool, Earl Barrett at Villa and David May at Manchester United gave master classes in the art of defending.

Gates were rising and Sky TV, with its dancing girls, sumo wrestlers and Andy Gray was beginning to attract a new clientele for the game – those who watched on TV and swore lifelong support to clubs they had no connection with. How many of today’s 30-35-year-olds will admit to buying and wearing a Blackburn Rovers shirt with Shearer or Wilcox on the back of it?

And there we were, stuck in the Endsleigh League Division One, a league sponsored by the National Union of Students Insurance Company and desperate to join the Liverpools and Chelseas at the top table.

Problem was, how on earth could we do that with a ground that had seen better days, an honourable chairman who did not have the financial clout to compete with the big boys and a team that lined up at Ashton Gate this?
Tony Norman; Martin Gray, Gary Bennett, Andy Melville, Darius Kubicki; Gary Owers, Derek Ferguson, Kevin Ball, Michael Gray; Phil Gray, Don Goodman. Subs: Alec Chamberlain, Brian Atkinson, Lee Howey. 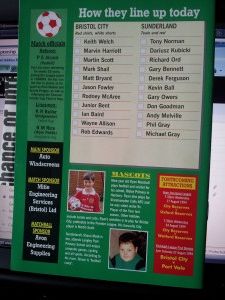 Not involved on that day were Shaun Cunnington, Dickie Ord, Martin Smith and Craig Russell, the last three becoming genuine Sunderland heroes in the following season. But it wasn’t a great line up.

City had finished just below us the previous season and were to do so again – but they were relegated and we weren’t. Martin Scott, one of my favourite Sunderland players, turned out for them (Buxton swapped him for Owers in December) as did Wayne Allison, a bruiser of a centre forward, nicknamed The Chief, who always seemed to play well against us.

Of the match, I remember very little other than Tony Norman had an excellent game after spending the previous season on the bench and Don Goodman rattled the bar. It ended 0-0, a fitting start to a season that promised little and delivered even less.

For me, it was a long day. I left home at 5am in order to drop a visiting Russian friend off at Heathrow, moved on to Bristol and then, straight after the game, drove to Canterbury where I paid my first, and so far only, visit to the St Lawrence ground and saw Carl Hooper and Min Patel run through the Durham batting. Not a great sporting weekend.

For those who have got this far (both of you) may I dip into the cultural world and recommend a film? Boyhood is well worth a visit if you can find it among the Apes, Dragons and Super heroes clogging up the multiplexes.

It is a film made over 12 years with the same actors and shows the development of a boy from the age of six through to 18. The acting is wonderful, the direction even more so. It’s a cracker. The three hours spent watching it were far more memorable than that last visit to Ashton Gate.

8 thoughts on “Fifty years of Sunderland openers: (4) Bristol City away but hardly shipshape”

Next Post
A warm Salut! Sunderland welcome to Jack Rodwell. Who’s next?