Our own Nic Wiseman, who has been helping out on editing for a few months, was co-editor of one of those fanzines that deserved to prosper but didn’t. Salut! Sunderland reproduced highlights in a half-decent series, but one key item was missing – a piece about Kevin Ball that initially had the man himself feeling rather cross before peace was made. Nic has located that article. Let him introduce and then reproduce it, as well as plugging a new site all Sunderland fans should visit: https://ithics1.wordpress.com/ …

In May 1997, younger readers maybe won’t remember, we played our last league game at our previous home, Roker Park.

We tonked Everton 3-0 to give a fitting farewell to an old lady we all loved, but who was now less than fit for purpose. Also that season we were teetering perilously to an ignominious relegation to the second tier of English football.

As we trooped out of the Fulwell End for the final time, one our group uttered the prophetic words: “I wouldn’t care if relegation were a nailed-on given, It’s the hope I can’t Stand!”

Then when relegation was once again confirmed and we decided our views weren’t being represented in the fanzine market, we decided to set up our own. And that was the name we gave to it. It lasted a mere 17 issues and the project has been far outlived by ALS, the mag which pushed us into action. Those 17 issues contained some much loved items which were recreated here https://safc.blog/category/the-ithics-files/.

The one article which was thought lost and forms a central tenet of the fanzine’s history is the Farewell tribute to Kevin Ball by co-founder, Mark Egan (@rokerpark).

It was meant as an affectionate tribute to Bally, but the great man took exception and called me up. In the early days of mass mobile phone use, obtaining my number was a great feat. Anyway, Bally had his gripe then continued to chat about football for 30 minutes more, much to the puzzlement of my then new girlfriend (now wife of 11 years). We ended the call as friends.

Here is the piece in question, which was once thought to be lost, but was found in our photographer Neil Chandler’s loft (@chandlerdba). All references to time and dates relate to back then.

And what is more, with the renewing of vows many fans had with the club during the Wembley cup final in March, we have decided to revive the spirit of ithics and have set up a site, which I hope you can visit: https://ithics1.wordpress.com/ 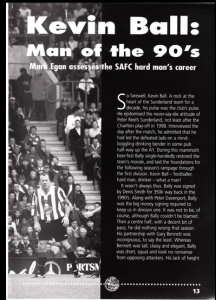 So farewell, Kevin Ball. A rock at the heart of the Sunderland team for a decade, his pulse was the club’s pulse. He epitomised the never-say-die attitude of Peter Reid’s Sunderland, not least after the Charlton play-off in 1998.

Interviewed the day after the match, he admitted that he had led the defeated lads, on a mind-boggling drinking bender in some pub halfway up the A1. During this mammoth beer-fest, Bally single-handedly, restored the team’s morale, and laid the foundations for the following season’s rampage through the first division. Kevin Ball—footballer, hard man, drinker—what a man!

It wasn’t always thus. Bally was signed by Denis Smith for 350K way back in the 1990s. Along with Peter Davenport, Bally was the big money signing required to keep us in division one. It was not to be, of course, although Bally couldn’t be blamed. Then a centre half, with a decent bit of pace, he did nothing wrong that season. His partnership with Gary Bennett was incongruous, to say the least. Whereas Bennett was tall, classy and elegant, Bally was short, squat and took no nonsense from opposing attackers. His lack of height always raised question marks amongst fans about his long-term future as a defender; but it was a surprise to everyone when Mick Buxton (not Peter Reid, as is often claimed) switched Bally to midfield in 1993.

When Sunderland faced Portsmouth in December 1993, we were bottom of the first division and had lost seven games on the trot. Terry Butcher had just departed and Mick Buxton was taking charge of the team for only the second time. Bob Murray had also just resigned as chairman—the club was in a mess and relegation looked an odds-on certainty.

Bally was paired in midfield with “playmaker” Derek Ferguson; Shaun Cunnington was out wide right and Martin Smith played on the left. Andy Melville and Gary Bennett were paired at centre half, with Dickie Ord and Gary Owers full-backs. Alec Chamberlain was in goal; Goodman and Gray operated up front. The match was no classic, but Bally added a new steel to the midfield. His tackling, and short passing broke up opposition play and provided opportunities for the supposedly more skillful players, particularly Ferguson, to flourish. Bally played a part in the only goal of the game—a late tap-in from Martin Smith. The away fans went wild—it was our first away league win for ten months.

Bally carried on in midfield, hardly ever appearing as a defender again. He was particularly effective away from home at stopping opposing teams from controlling the midfield area and, despite his reputation, he did not lack skill. He could play a decent long pass, and his short passing was often excellent. Increasingly, however, he lacked pace, which often led him to mistime tackles and earned him an ever-growing haul of bookings. In the last couple of seasons he looked out of place alongside the likes of Clarke, Johnston, Summerbee and Schwartz. In truth, whereas Bally was a good player in a poor side in 1993, he looked out of place in the far better squads of recent years.

Off the pitch, Bally had an enormous influence on the club’s development under Peter Reid. Sharing his gaffer’s single-minded determination and will-to-win, Bally was in inspiration to his colleagues, a true professional who combined discipline with the good sense to know when a few drinks were appropriate. His commitment to the cause endeared him to the fans. Despite being a southerner, he loved Sunderland, the north east and its people. His kids were regular attenders at the match. He became an honourary mackem, not least as a result of his obvious joy when the Mags were dispatched earlier this season. His testimonial attracted over 27,000 fans—the biggest crowd at a Sunderland testimonial for over twenty years, a tribute to the man.

Bally was not cut out for football in the late 1990s. Not for him defensive “systems”, squad rotation or total football. The insidious growth of “FIFA directives” ensured that Bally was on for a booking almost every time he stepped on the pitch. Bally’s game was uncompromising. He hoofed, he hacked, he mistimed tackles, he took opponents out of the game. He would have fitted well into the Sunderland side that nearly won the double in 1913. I can imagine him dressed in long shorts and a laced up shirt in one of those sepia-tinted photographs, arms crossed, his few remaining hairs plastered across his head. A look combining pride in his trade and contempt for his opponents etched on his rugged features. Playing at half-back, or some such long-forgotten position, his full-blooded tackles would have merited barely a word from referees in those days. He would have taken the tram to and from Roker with the fans and would have been one of the first to enlist for the war in France in 1914. He would have been one of the first over the top and, make no mistake, his men would have followed.

Now, he’s back darn sarf, at Fulham, of all places, playing in black and white. We wish him luck, but will we ever see his like again?

3 thoughts on “It’s The Hope They Couldn’t Stand: that elusive Kevin Ball epic”

Next Post
SAFC vs Swansea ‘Who are You?’: missing Cardiff, recalling mascot misery and bliss