John McCormick writes: It being almost half-term and Keir providing numbers, I thought I’d sum things up in a succinct headline, like the ones I used to get some forty years ago. Maybe M Salut will change it but, for me, it says all we need to know. For a little more detail and individual reports I leave you in the capable hands of Keir Bradwell:

Had little chance with any of the goals, really. But even so, at nowhere near his best yesterday.

Had a fairly decent shot on goal but was otherwise completely ineffectual. At fault for Hull’s second, being beaten in the air by James Chester, which gave them the lead. Becoming increasingly inconsistent.

Had a shocker all round. Nowhere to be seen for their third.

Not bad, but we conceded three at home to Hull. Not good, either.

In fairness, he was stuck out at left-back, a position he’s never looked very comfortable in, and he looked pretty decent defensively. Didn’t offer anywhere near enough in attack, though.

Seems to be making a habit of coming into form over the winter months. Sensational last January. Two in two now is a promising sign for the future.

Beginning to really rate Seb, even if he wasn’t at his best today. His work rate is fantastic, and he’s a lot more consistent than certain other members of this squad.

Invisible, sadly. Hasn’t been in particularly good form of late after a stellar start to the season.

Caught in possession constantly, and often at fault for our sluggishness going forward.

Have a bit of patience with Alvarez, I think. Rubbish at Hull but has been a good option from the bench previously. Needs a bit more time to settle into a starting position. 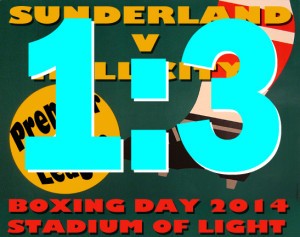 Okay. It’s impossible to score goals when you have nothing being created for you to finish. Struggled as a result of the rest of the team, rather than a lack of effort.

Nice to have him back. Hopefully he finally gets a run in the side now he’s fit.

Didn’t have much time to make an impact.

Next Post
Aston Villa v SAFC Guess the Score: time for some bouncebackability