How many times over recent seasons have we talked about a forthcoming game as one that defines the season?

It has been often, and always because Sunderland have been in dire trouble or on the edge of it. So the matches in question have tended to be at home, either clear six-pointers or against teams we just have to beat to get points on the board before tougher tests ahead.

WBA on Saturday is another such tie. Losing it will not send us down, just make it seem less likely that we will once again drag ourselves clear of the mire. No one should rely on sensational displays of the kind we saw last season at Manchester United (next game up after the Baggies) and Chelsea. Winning would not necessarily keep us up.

But we all know what important factors are at stake. Three points, won convincingly, would ease the pressure on Gus Poyet and his players after the lamentable performances at Bradford and in the last home game, versus QPR.

Such a victory would not mean Poyet is suddenly the manager of all our dreams, or that serious deficiencies did not exist in the squad; it would just make us feel better. There have been precious few feelgood games this season, or indeed in many recent seasons, and a good win would do wonders for morale, especially if followed by a heartwarming resistance at Old Trafford.

So just for now, I refuse to dwell on the other distinct possibility, yet one more dismal home surrender, or two squandered points, and a tonking from Man Utd.

Sixer Must Stay, cried Bob Chapman on these pages the other day. Our acclaimed scribe, Pete Sixsmith, is making worrying noises about his future commitment to the club. This season’s dross, coming after 50 years of much more dross than the average man should be obliged to take (punctuated by a few moments bright enough to foster dangerous hope), has taken its toll.

“Lose on Saturday and it won’t just be Poyet leaving SAFC,” Sixer exclaimed in his report from Valley Parade. “I’ll be joining him.”

This prompted Bob’s comment urging Salut! Sunderland to launch a campaign to make him think again. Bob even invoked his own stamina, or gluttony for punishment, by talking about his own boyish sense of excitement about the WBA game, despite it meaning for him the same 480-mile round trip he must make for every home game. What a shame that Bob had to add: “Can anybody help me?”

I am hoping the campaign will not be necessary. The best outcome would be that our woeful under-achievers, perhaps chastened by the odd post-Bradford encounter with fans in the supermarket or leisure centre, start playing out of their skins and charge up the league. Six for Sixer would be a good start, with a 6-1 home win against WBA to match the scoreline on another occasion Sunderland were in peril, Feb 22 1977, provided the season ended more happily (we went down anyway).

Otherwise, you may just have to take my word for it that we have been here before, that Pete tends to have these dark “never again” moments at about this stage of every three seasons out of four. Then a bit of examination marking or supply teaching comes in and the season tickets for SAFC and Durham County Cricket Club are duly renewed, for whichever division.

I have done my bit, mending the 50p wooden Che Guevara trinket I brought him back from Cuba, but which snapped during the flight home, so maybe that will be the bribe to make him change his mind if only it can survive the journey north intact. 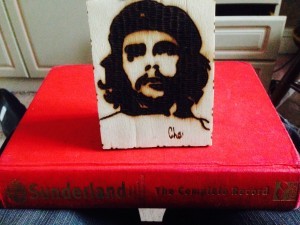 And one of Pete’s former pupils, Carl Hawman, tweeted this when he saw the “enough’s enough” quote: “Ha, knowing Peter since the early 90s at Ferryhill Comp, I know tongue is placed firmly in cheek. He used to say the same to me as a kid. I love the bloke, to me he is the level above uber fan.”

* Pulis and hoofball, Ideye on fire, Speedy Sess and fine Sunderland sausages: the SAFC vs WBA ‘Who are You?’ at https://safc.blog/2015/02/west-bromwich-albion-who-are-you-hoofball-ideye-brown-sess-and-sunderland-sausages/

Q: Do you have any thoughts on Sunderland – the club, the fans, the city, the region, Poyet, Billy Jones?

Kev Candon: My first visit to Sunderland was in the FA Youth Cup final 2nd leg in 1969/69 we lost 6-0 after being 3-0 up from the first leg. My father words not mine (the only good thing about Sunderland was the Sausages he had on his breakfast). I have been many times since and have always found the fans and the place friendly enough. I was there last season and we had a great time with your lot even after the game and a good night was had by all.

** An appeal to Sunderland supporters – https://safc.blog/2015/02/still-seeking-justice-for-jeff-as-west-bromwich-albion-visit-sunderland/ – to join WBA fans in their minute’s applause (the 9th minute) in the Justice for Jeff campaign (I have promised Jeff Astle’s daughter Claire that my participation is assured).

Otherwise, just Ha’way the Lads – and thanks for the bumper entries in Guess the Score (see https://safc.blog/2015/02/safc-vs-wba-guess-the-score-50-shades-of-unbearable-hope/).

21 thoughts on “Sunderland vs West Bromwich Albion: save our Sixer”

Next Post
West Bromwich Albion ‘Who are You?’: hoofball, Ideye Brown, Sess and Sunderland sausages