Skip to content
Where has all the fun gone?

Nic Wiseman has been gazing into his navel at the current state of football in general and Sunderland in particular. Nothing he says alters the right of any individual to be presumed innocent until proven otherwise (and we shall be vigilant about comments left below) but it’s plain to anyone reading his words that here is a lifelong fan who is losing the will to support …

Football has been kicking its way down Skid Row for some years now, but events over the last couple of days have made me question if I really want to finance this increasingly rancid sport any more.

First was the farcical sending off of Wes Brown at Manchester United on Saturday.

Most commentators assumed it was a case of mistaken identity and that the suspension would be merely transferred to John O’ Shea, the real miscreant.

This was before the Professional Game Match Officials Limited (PGMOL) took the unusual step of issuing a statement on Saturday night saying that referee, Roger East, had seen O’Shea’s offence but thought that Brown’s was worse and penalised him instead.

As Alan Shearer said on that night’s Match of the Day, if he had penalised the original offence, Brown’s subsequent “offence” would have been after play was halted. I don’t know what the game’s authorities are playing at.

Is it too harsh to suggest that the FA, and these representative bodies associated with the game, desperately need better leadership?

The Old Trafford debacle came hours after world governing body, FIFA, announced it would be delaying trialling video technology in the game by another year. Why?

Then the inevitable overturning of Brown’s red card confirmed early impressions of the match officials’ incompetence. 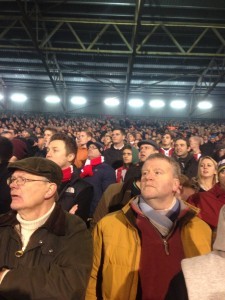 And as the day drew to a close, Twitter was excited by The Sun’s story headlined: “England Ace arrested on Sex charge”. Before going into this, who talks about an England Ace anyway? It was like something the dear departed Victor might have said.

Anyway, I digress. I tweeted that it probably referred to a current League 2 player who had once appeared for England under 21s. Little did I know it was our very own Adam Johnson: three times scorer at St James’s Park in away derbies; one of the star players and high earners in a Sunderland team devoid of many true stars.

The Durham police statement merely read: “A 27-year-old man was arrested earlier today on suspicion of sexual activity with a girl under 16.”

My first reaction was one of complete depression. I had visions of the disastrous Ched Evans affair going through my head. It is just as well the criminal justice system demands the presumption of innocence but it is also right, and can be said without the least risk of jeopardising that principle, that no one, whether a handsomely paid footballer, a newspaper editor, a high-profile politician or Bert Bloggs, is above the law.

The club have acted swiftly in suspending Johnson until the police investigation is concluded. Presumably that means he will not play for Sunderland until the police are satisfied he has no case to answer. The alternative would mean that he is charged and put before a jury. And then the facts – and the player’s future – would be for the courts to decide.

Thankfully, the club have acted correctly here. But on Tuesday morning, the media has been going crazy. Pictures of Johnson’s home have been published on the internet. There have been lurid details of what the alleged offence might have been. Many outlets are reporting the offence as “sex with a 15-year old”, whereas the police statement referred only to “sexual activity with a girl under 16”.

The reports of a loaded gun being found at the property spiced up the reports a little further. Never mind that the gun appears to have been a starting pistol! It is not unusual for a sportsman to own one; my granddad did and he was a Durham policeman! But The Sun didn’t report that.

I started this piece thinking that I would write about my disillusion with football and it’s seemingly scruples-free leaders.

Now I find myself being steered to dodgy reporting of a sensitive issue. Yes, the charge against Johnson is serious, but there is due process and it needs to be followed.

His girlfriend’s parents are quoted as saying they’re standing by him and have complete confidence in him. That’s good to hear. But it’s worrying that minutiae of the case have already been reported. Despite all its travails, The Sun still can’t control itself.

Obviously it has received information from someone connected with the police. How else would some of the details have found their way out?

But while this sordid matter is sorted out, let’s get back to where I started: leadership in football. Then there’s the money.

Consider another recent example. Football has been given a huge TV contract which values each Premier League game at £10m. When asked if some of this money should be used in the community, Richard Scudamore, the CEO of the Premier League, made no apologies for having obtained the best price, and was dismissive of the proposition. “We are not a charity”, he said.

So, I’ve rambled on, wrung my hands and what will I do? Well, I am seriously considering not renewing my Sunderland season card. Not because of Johnson but because of my general dislilusionment. As a London-based supporter, this may not seem such a huge sacrifice or gesture. But I am not alone; I spoke to one Twitter user last night who said she had decided not to renew, and she gave a reason that hit the nail squarely on the head. Football, she said, just isn’t fun any more.

14 thoughts on “Wise Man Says: where has all the fun gone?”

Next Post
Chapman Report: picking up points on the A1, not at Manchester United