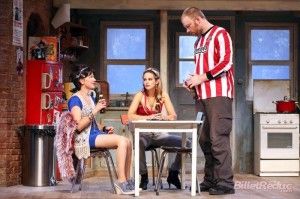 Spot the difference. Above you see, and may recall from these pages, the set of a play called Sunderland, a dark social comedy written by a Frenchman, Clément Koch, who had studied and worked in the North East of England and decided to set it there. Below, you see what it’s become on the big screen. It’s now about the French city, Saint-Etienne, and it has just been released.

The play took Paris theatreland by storm, selling out night after night at Le Petit Théâtre de Paris, albeit as smallish a venue as its name suggests.

I believe I was first with news of that for the British media, publishing it initially at Salut! Sunderland and then telling the BBC about it, though it was from a journalist friend working in Paris that I had heard about it.

I was certainly first to report that the playwright had sold film rights to a French producer, Richard Pezet, who told me he had decided to relocate the story to the French city of Saint-Etienne, nearly as football-mad as Sunderland and also having a troubled recent industrial history, including significant past reliance on coal mining. Read https://safc.blog/2012/02/sunderland-the-play-wowing-paris-to-be-sunderland-the-film/.

Enter the director Charlotte de Turckheim and filming of Qui c’est les plus forts? – who’s the strongest? – was soon enough under way. It came out in France on Wednesday after useful press an TV publicity build-up and stars Alice Pol, Audrey Lamy and Bruno Sanches.

I have not yet seen it or early audience figures but suspect this will be one for Francophone countries, with possible art-house interest from Britain.

Turckheim and Koch, who co-wrote the screenplay, found they shared a liking for “taking frivolously about serious matters and gravely about frivolity”.

This is from the piece to which I link above, written after I saw the play in Paris:

That is the play, from which the film is “adapted”, though I believe much of the storyline remains.

I hope the film prospers even I wish it had still been about Sunderland.

2 thoughts on “Now a reality: Sunderland the play, Saint-Etienne the film”