Malcolm Dawson writes….with Santa’s Advent timetable and the weather in Weardale conspiring against us neither Pete Sixsmith nor I made it to the Stadium of Light to witness first hand yet another home defeat against a side that we would have expected, in our unjustified state of optimism, to have beaten. So we are grateful that a new contributor has stepped up to the plate to offer his view of yesterday’s events. Welcome Paul Summerside to the Salut! Sunderland stable with his pre and post match thoughts on our defeat to the Hornets of Hertfordshire.

“A View from the Avenue”

Pre match….. Yesterday’s visit of Watford offered Sunderland the perfect opportunity to build on last week’s performance at Arsenal. According to our pre-match panel; Bry, Scott, Dukey, Marty, Becca and Yours Truly, the main problem would be getting 11 fit men who would slot into place in Big Sam’s 3-5-2. The keeper, back 3 and wing backs picked themselves. Everyone agreed that finding a solid midfield 3 would be the biggest problem with Rodwell and Toivenen getting most votes to join M’Vila.

The second problem wasn’t really a problem as such with a choice of Borini, Watmore, Jonno, Lens, Graham and Fletcher for the front 2 spots with Graham and Watmore seeming to be the most popular choices. (Graham and Watmore! Didn’t realise the beer in the Avenue was that strong! MD)

Predictions ranged from positives of 3-1, 2-0, 2-1 to my melancholy “I’ll take a point now”, hoping I’d be wrong and everyone else right, because we all saw this as a true 6 pointer. A win would see the lads knocking on the door of mid table going into the difficult festive fixtures. We left with high hopes of a repeat of the Stoke game.
Ha’way the Lads.

Post match….. The general opinion on the game was that Big Sam basically picked the wrong personnel for the formation we attempted to play. The absence of Kaboul, Cattermole and Larson left us lacking a natural third centre half and a tough tackling midfielder. So to persist in a 3-5-2 system using the right footed full back Billy Jones as your left sided centre half and Toivenen as your midfield engine, looked completely wrong.


It only took Watford 3 minutes to expose this mistake and we could have been 3 down before Big Sam held up his hands and went to 4-5-1. This gave us a toe in the game and allowed us to get to half time without further damage. The crack over a beer at half time, was basically about how to win the second half, most people going for the introduction of Defoe and Jonno/Lens for the ineffective Borini and Toivenen, and a return to 4-4-2.

Things started to look up when Jonno came on, and once Defoe eventually got his opportunity we started to pose a genuine threat. Chances came and went but luck deserted us, and we could not break down a dogged Watford defence. We tried hard, nothing was left behind on the pitch but quality in the final third has to return if we are to climb the table.

Finally…. a note to Big Sam. Never again must you play 3 centre backs, if you only have 2 fit centre halves. The solution to the problem is to play a flat back 4 with Rodwell (best game for club today) in front. Once you realised this and made the changes things generally improved. If the advantage hadn’t been given to Watford so early in the game, and attacking substitutions made so late, we could have taken a point or perhaps all 3. Hopefully lessons have been learnt and we can move on. Onwards and upwards.

Paul Summerside on himself: 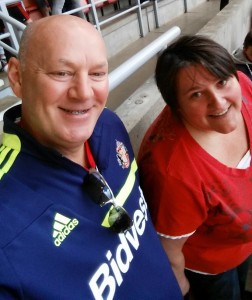 I’m a retired engineer formerly working at Rolls Royce Aero Engines in Sunderland. I’m married to Sharon and have two daughters Rebecca 16 and Jessica 11. We have season tickets in the Family zone, and are basically Sunderland daft! I’ve followed the Lads all my life from the Roker End to the fulwell to the Paddocks to the Clock Stand seats to the SOL. I love match days,the crack pre and post game, even if the result doesn’t go our way. My favourite ever player…Super Kev. Favourite away day…Bury away promotion day. Proudest moment…taking the family for cheesy chips on Wembley way.

5 thoughts on “Sixer’s Substitute Soapbox: a view from the Avenue as Watford win”