Malcolm Dawson writes…….Sixsmith Towers was a haven of joy and celebration this morning as Pete Sixsmith listened to Test Match Special’s description of Durham cricketer Ben Stokes totally destroying the South African bowling. World records tumbled as the highest ever partnership compiled by two ginger headed batsman put the game (and probably the series) beyond the reach of the home side. There were celebrations yesterday too, though somewhat more muted, following Sunderland AFC’s third home win of this season’s Premier League campaign. On the way to the game we speculated that recent injuries to Kaboul, O’Shea and Coates left Big Sam with few options at the back so it was with some relief that we heard the team news as we parked up pre-match. O’Shea and Brown, a well tried but ageing partnership was surely better than any available alternative. It didn’t take a genius to realise that anything short of a win would have left us with as much chance of avoiding relegation as South Africa have of winning the second Test. We achieved that at least and the lifeline, through frayed is still intact. Here’s how Pete saw things.

In our dire situation, a win is a win and three points should be gratefully accepted – and we do, oh yes, we do. The first win since current media darlings Stoke City were seen off at the end of November saw us regain a grip on the coat tails of Newcastle United and Swansea City in the swamp that is the bottom of the Premier League. Much can change between now and the darling buds of May appearing. We could go on a blistering run a la Leicester City and pick up 30+ points between now and the final game at home to relegation rivals Chelsea. Or we could slip away with barely a murmur as Aston Villa appear to be doing after their loss at The Stadium of Light yesterday.

It depends on the calibre of footballer that arrives on Wearside in the next 28 days. The squad needs bolstering, of that there is no doubt, but which players can be tempted to sign for a club which started the season as one of the favourites to go down and who have done little to make the bookies sell their Jags and replace it with a second hand Lada.

Yesterday’s win was welcome but was against opposition so poor that it would have been an utter disgrace not to have beaten them. If this was the best that Reme Garde could produce, what a shame that he isn’t in charge at The Sports Direct. I said in the 7 that it was the old boys who got us through this, and it was. John O’Shea and Wes Brown have known little other than relegation struggles since Steve Bruce brought them to Wearside, which must be strange after a lifetime of winning things with Alex Ferguson. Brown has hardly played this year and is clearly winding down his career. Sunderland must hope that his experience and professionalism rub off on Thomas Beadling, a young central defender who may well get a game at Arsenal on Saturday. Both central defenders did well in this one. Brown may have missed the speed merchant Traore for the equaliser, but his no-nonsense defending and ability to boot the ball out gave us a relatively secure base, while O’Shea’s complete domination of Gestede meant that any chances Villa created came from their midfield.

Lee Cattermole grew into the game and was excellent in the second half, tackling, cajoling and passing the ball as if his life depended on it. With the always reliable M’Vila (we’ll forget the attempted trip on Traore) behind him, we had a reasonable base to win the ball and move it forward.

And up front we had Jermain Defoe. According to the ever reliable Sunday Mirror, he is on his way to the retirement home that is Bournemouth, swapping a crowd of 41,000 for one of 11,000. The climate may be more agreeable on the Costa del Geriatrica but if he wants s to play his football in front of a proper audience, he will stay at Sunderland. He took his two goals well. His first was a joy to behold, not least because it put us back in front. He received an excellent ball from Johnson and then stitched the ageing Joleon Lescott up beautifully before beating Guzan at his near post. A classic striker’s goal and one that spelled doom for the Villa.


His second came after a comedy of errors that would have shamed the Brandon and Byshottles Sunday League Division Three as Villa threw the ball to Cattermole who took it up to the corner flag and then from the resulting throw allowed Graham to play in Toivonen, who calmly squared it for Defoe to rattle the back of the net. If ever a goal summed up the ineptitude of the opposition that was it.

What about the others? They did OK. Nobody was totally off the pace, although Borini looked unhappy on the wing. There was plenty of effort as there had been on Wednesday and this time we were able to go on and win. Mistakes were made but that happens – our errors were nowhere near as catastrophic as those perpetrated by the visitors.

But we have no identifiable style and it always strikes me as 11 blokes playing football. Villa, for all their weaknesses, played some tidy stuff in midfield but they ran out of steam, with Grealish being the main culprit. Yet another example of a player choosing to believe what is said about him rather than focusing on performing. He is clearly the next Joe Cole/Jack Wilshere. (or Connor Wickham? MD)

There is still a long way to go and a win over Villa is nothing to get excited about – they may struggle to beat our 15 point total and could even fall below the alarmingly low 11 points that Derby County (Robbie Savage and all) achieved in 2008.

We now go into an FA Cup tie with Arsenal and I expect to see a very different team from the one that turned out yesterday with some of the younger players given a chance to show what they can do. Then, we go on to Swansea, where I expect to see at least one new player as we go into yet another crucial game. Win that one and we give ourselves a chance – lose it and we are back amongst the dead men yet again.

Villa are already there and waiting for the coffin nails to be banged in. 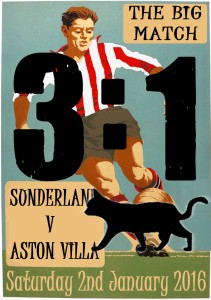 Next Post
As the window opens, a team of Sunderland signings to forget