John McCormick writes: I’m not sure if the title line will make sense to you but when I was putting it up a song was going through my head and I thought…

“…why not, Martin Bates deserves a bit of appreciation”.

The only problem is I couldn’t fit Toronto in, so he’ll have to make do with Montreal.

Here’s the final part of Martin’s trilogy. By now he should have have winged his way back across the Atlantic but, after this game, he probably didn’t need a plane. What a send off.

Hope you enjoyed the trip, Martin, and thanks for the reports.

The last of my three game tour saw Sunderland host Manchester United. A team they have not beaten in the league at home since I was thin & had a full head of hair (ie 1997).  My hope for the three matches I was here for, was that Sunderland would get 4 points.  As you are no doubt aware, the Man City & Liverpool matches saw only a 1 point return.  Needless to say if I was to achieve my predicted point tally, Sunderland would have to come up with a result not seen here since the days of Roker Park close to 20 years ago.

The day started with a 45 minute walk to the Stadium of Light from my hotel in a cold & wet wind.  As it was a 12:45pm kickoff,  I was at The Colliery Tavern for some pre match pints just after 10am.  The pub was soon packed, & I mean packed, with both sets of fans. As kick off time approached the pub came alive with songs.  Unfortunately it was the Man U fans doing most of the singing.  With that, I took my leave & my cousin Declan & I braved the sleet & headed to the Stadium.

Our seats were still in the north stand but this time closer to the eastern corner flag.  This proved very significant as just after 3 minutes Sunderland were awarded a free kick on the opposite side of the goal from where I was sat.  I had a perfect view as Khzari lined it up right footed & struck the ball goalward.  At this point things seem to go in slow motion.  The Man U back line decided not to play the ball, Defoe purposely let the ball pass untouched through his legs, DeGea was too late to react & the kick from Khazri nestled into the bottom corner of the net right in front of me.  One – nil to Sunderland after three minutes.  This was the first time in the 3 games I was at that Sunderland had a lead & something to protect.  Eighty something minutes left is an eternity to defend.  Unfortunately after a great first save from Manone about the half hour mark, Man U popped in a rebound & it was 1-1 at the half.

Despite what possession stats may have shown at halftime, if I was offered the draw therefore giving Sunderland a single point,  I would have refused it. Man U were there for the taking & I wanted 3 points.  As we know now, it was Kone the hero with a powerful header from a Khazri corner with just under 10 minutes to go.  Now I was praying for the final whistle.  Four minutes of added time seemed like an eternity. Then it came, the final whistle. Sunderland won, 3 points on the board & I got my four point tally from my three match visit.  A tally that NONE of my football friends on either side of the Atlantic thought was achievable.

A loss, a draw & a win is what I experienced. I am so proud of this team who recently never seem to quit.  The January signings, I think we will all agree, have certainly made a positive impact on the team.  As I write this on a plane homeward bound to Toronto Canada,  Sunderland are still in the dreaded relegation zone but they have closed the gap & safety is in sight provided Big Sam keeps them focused on the task at hand.

My trip has now ended and I am on my way back to what I hear are freezing temperatures (-25 Degrees).   The people of Sunderland were truly wonderful to me during my stay. From Declan & Julie, the staff at my hotel, Maxine from the Colliery and certainly Les Cooper, to a man and woman they truly made this a trip of a lifetime.  I can’t thank you enough. 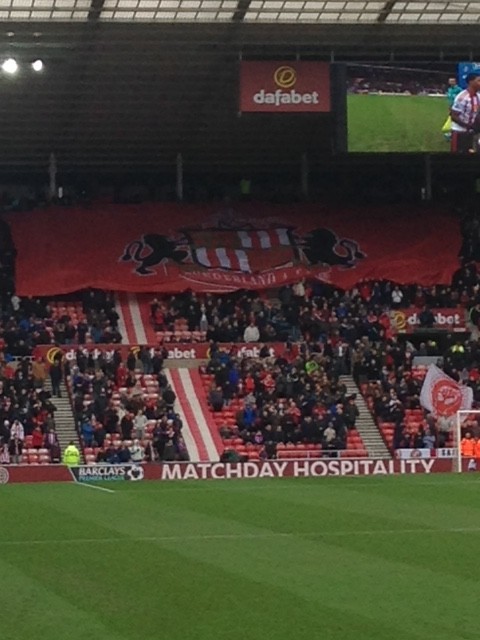