This is an article Hayley Penman, then aged all of 10, wrote for Salut! Sunderland back in February of last year. It was warmly received, and rightly so. Recently, another supporter of Sunderland AFC, Jennifer Lowery, though not of Hayley’s generation, asked that a prize mug due to her for coming up with the title of the manager’s post match e-mail “Moyes on the Boys”, should go to a deserving young reader of our choice. We invited suggestions and Hayley’s name popped up in the replies. The mug that is on its way to her is well deserved. It will not change her life but I hope it will encourage her to write over and again for this site and to develop what is clearly a real talent …

Hayley Penman is 10, a lot younger than most of the people around here, but she is not entirely new to Salut! Sunderland, and she is a Sunderland fan, a regular at the SoL. Her contributions are always welcome – and Monsieur Salut owes an apology for the whimsical category title of Hayley Mulls (her next project is to come up with a better one). Here, she discovers a close-to-home link with a Sunderland hero who died long before she was born: ‘Cannonball’ Charlie Fleming …

Blairhall, where I live, is a small mining village between Alloa and Dunfermline.

When I go to the Stadium of light for a home game on a Saturday, I travel by car, bus, train and Metro. And I do the same on the way back. But Blairhall is also the village where Charlie Fleming was born and where he lived.

Like me, he made the trip to Sunderland for matchdays, but he was going there to play football, not watch, and at Roker Park.

Charlie and I went to the same school, Blairhall primary, but he didn’t have the same teacher!

He joined East Fife from Blairhall Colliery and became an important reason for their success in the 1940s and 1950s.

During his time with East Fife he also won his only international cap, and scored twice in a 3-1 win over Northern Ireland on 3 October 1953.

He moved to Sunderland in January 1955 for £20,000 (plus Tommy Wright in exchange) where he remained for three seasons. And he was very good, scoring 71 goals in 122 games. No wonder that his nickname was “Cannonball Charlie” in recognition of his shooting ability.

Charlie played as a striker. Maybe not as many goals as for East Fife or, later, Bath City the other teams but still lot of goals for us.

Blairhalls – where he also played in a Scottish amateur cup final – is tiny. No seats, no shops, no gates. It’s just a open green space. But in that cup final, there were 3,000 people there. Can you believe it?

Charlie left Sunderland in 1958 to become a player manager at Bath City. For them he scored 216 goals in 300 Games! He was 31 when he joined them. That is sooooooooooo many goals!

When he retired, he moved back to Oakley, the village next to Blairhall. Charlie died on August 14 1997 aged 70 – the day the Stadium of Light hosted its first league game. 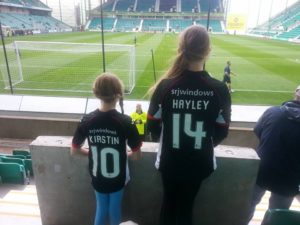 Hayley’s update: Hi, I’m glad everyone likes my article. I need to do more soon. Just to let you know, I don’t support Dunfermline more than Sunderland. I support them both. It’s just that my dad can’t take me to Sunderland games because so many are moved for TV. We try to go to as many as possible but Dunfermline is easier to go to. Hope you all had a good summer and were not too annoyed Sam left …
Byeeeee

And I still play on the pitch that he played on!

There have been a few other famous players that played for Blairhall:

1 thought on “Hayley Penman, supporter of Sunderland and Dunfermline: a young star rewarded”

Next Post
Taylor Made: a cynical look at the A to Z of footballers’ origins