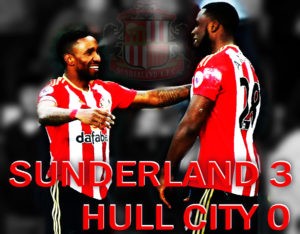 John Mcormick writes: It’s Saturday night, and I’m letting the Chateauneuf-du-Pape breathe. The steak is out of its wrapper and relaxing. The cheese, (a brie that would please Mme Salut) is just resting until it becomes “au point”. Ok, my beloved wife has just explained how I should operate an iron, but my use of such an implement is theoretical and cannot detract from the evening. I’m happy. I’m content. I’m even looking forward to Match of the Day.

But the big thing, the perfect thing, is the knowledge that tomorrow, when I’m cooking the free-range sausage and boiling the free range eggs, it’s Malcolm who will be posting a top-notch account from a top notch reporter, spectator, supporter, or any other noun you may wish to insert.

I’ll leave it to him (Malcolm, that is) to continue. After all, he was there and I wasn’t…..

….Driving to the Stadium of Light yesterday, I realised that I had left my wallet with my season card at home but as I was only five minutes into my journey I had plenty of time to turn around and pick it up. For thirty minutes I was wondering if I had made the right decision. I couldn’t work out if the team had decided to take part in the latest social media craze, the mannequin challenge or whether or not they had been inspired by the latest health craze for the over 50s – walking football. For thirty minutes the midfield defended deep in our own half and when we had the ball there was absolutely no movement off it. How we are missing Lee Cattermole, Seb Larsson or Steven Pienaar, who might have injected a bit of enthusiasm into the rest of players. Even the headless chicken Duncan Watmore seemed content to stand still and watch the player on the ball.

I sent Pete Sixsmith a text which said simply “this is horrible”. Then a bit of magic from Jermaine Defoe turned the game and Victor Anichebe showed that he might well become the most important of our summer signings. I still thought we were poor, mind. Does Sixer agree? Read on to find out…………

What a day. Charlie Hurley and his merry men paraded before the start, Victor Anichebe doing a first rate impression of Vic Halom, a power cut that changed the Stadium of Light into a winter wonderland and the introduction of cardboard clappers – of which more later. And as a bonus, we won for the first time at home this season and for the second game in succession. All this in front of Sixsmith Minor, paying a rare visit from Thessaloniki to visit his not quite so smarter elder brother.

There were tears in the eyes of many of us as The King led out the Magnificent Seven team mates who thrilled M Salut and I when we were nobbut young ‘uns.

Monty, Cec and Len (“Flowerpot Men”), Martin Harvey, who replaced two captains in a week for Sunderland and Northern Ireland, Brian Usher, George Herd, still seen on the Northern League scene barking orders at young men who earn as much for a game as he earned in a week and Stan Anderson, Horden born and Red and White through and through until he was replaced by Harvey and sent off to help Newcastle United join us in the First Division. Alas, no Johnny Crossan while George Mulhall is very ill at his home in Halifax. Nicky Sharkey and Jimmy McNab are no longer with us.

After the nostalgic tears came twenty minutes of head shaking and silent mutterings as Hull started well with some crisp passing and we struggled to get close to them. A careless pass from Didier Ndong (as common as a Nigel Farage smirk) gave Sam Clucas a scoring opportunity that was well saved by Jordan Pickford, a save which proved to be the first of three exceptional ones as we strove to win.

The line-up was a mixture of youth and experience with few of the younger players having a great deal of Premier League experience. One of those was Jason Denayer who was given the Cattermole/Kirchhoff role in front of the back four and who performed admirably for an hour until his legs began to go.

He got forward well and his energetic performance allowed the manager to tweak the formation with Watmore and Halom, sorry, Anichebe, playing wide and Jermain Defoe playing through the middle.

The first goal came from a good ball by Billy Jones that Duncan Watmore flicked on to Defoe. He tormented Dawson and Elmohamady before planting a firm shot past Marshall in the Tigers goal. For a landmark goal, it was a wonderful finish and showed what a quality player we signed two years ago – in part exchange for Jozy Altidore. Best bit of business the club has done since The King was prised away from Millwall.

The ever willing and ever improving Watmore should have made it two just after the break and then it was the Vic and Jordan Show as the Nigerian and the Washington lad showed their qualities to the Magnificent Seven and King Charlie.

This was after the lights had gone out in a flash and which prompted thousands of people to whip out their mobiles and illuminate the scene. The lights  once failed  at Roker Park and the electrician could not repair the fault, so King Charlie shouted loudly and told the 40,000 + in the ground to raise their arms in the air and show the palms of their hands. This they did and the lights came back on to the amazement of the sparkie who said to the King “O great one, how did you manage that?” Charlie looked at him earnestly and said “Ah, it’s an old County Cork proverb; many hands make light work.”

Young Duncan then combined with Patrick van Aanholt to set the full back on a run across the Hull box. His pass to Victor Halom-Anichebe was a good one; the big man slipped two defenders and hit a good shot which should have been saved by Marshall. Monty as he is now would have made a better fist of it than the Scotsman did and we were two up and looking comfortable.

Enter Jordan Pickford. He had made a couple of minor errors earlier on, but now he produced a magnificent save from an overhead kick from the impressive Robert Snodgrass which Monty must have been purring at. He will play for England sooner rather than later and it was disappointing to see that Gareth Southgate did not give him his first cap against Spain. Just what one would expect from a former Palace and Middlesbrough player.

He went on to make another great save from a Curtis Davies header and then had PvA to thank for two subsequent goal line clearances from Mbokani and Meyler. Exciting stuff and the crowd responded well; the oldies had the whiff of the Roker Roar in their nostrils.

Defoe set up Halom-Anichebe for a third with eight minutes left and there was still time for an improving Djilobodji to pick up a totally unnecessary second yellow card for a foul on Bowen. He looked a decent player today, although the partnership with Kone is a long way from being perfect. Kone still looks as if his heart is set on a move. Maybe the King could be left alone in a padded room with our errant defender and convince him that he could become as loved on Wearside as the Irishman was.

A good win but we won’t play teams as weak or as injury hit as City every week. They have a paper thin squad, no money and the latest investors have pulled out leaving them staring at an instant return to the Championship. The odds are that we will be joining them, but there are glimmers of hope.

Firstly, the team appear to be playing for one another and there is a spirit amongst the players which Moyes has done well to tap.

Secondly, in Anichebe and Defoe we have two good strikers who will certainly prove effective against the teams in our mini-league that stretches from Watford downwards.

Thirdly, we have a potential world class keeper in Jordan Pickford which may help to cover up the obvious blemishes in our defence.

Fourthly, Borini, Kirchhoff, Larsson and Mannone are approaching full fitness and their presence will strengthen a thin squad.

Finally, the transfer window re-opens in January and the hoped for return of Yann M’Vila will add steel and quality to a midfield that just about functions.

Everton helped us out with a late equaliser against Swansea and it is to be hoped that we see the Chelsea of this season and not last on Teesside this afternoon. Every little helps, as the jingle goes.

As for the clappers; they were ok but I hope that they are not going to be brought to every game. The usage of them around me in the East Stand was minimal thank goodness. A tasteful murial (c. Hilda Ogden) would have been better and less irritating. As John Penman and his fellow train passengers found out on the return trip to Edinburgh, a clapper is for life not just Charlie Hurley Day. Two of his party played incessantly with the wretched things until they were seized by the founder of the West Fife branch just north of Berwick and hidden from view. A sensible man is Mr Penman.

Liverpool next week. Can they be as profligate as they were at St Mary’s on Saturday? Let’s hope so.

6 thoughts on “Sixer’s Soapbox: A clean sheet against Hull as we lift off the bottom”