Pete has asked me if I can do a match report for him as he’s taking in Bradford v Toulouse and won’t get in until late.

I can, but you mustn’t expect his level of wit, nor his keen observation and erudition. This was only my third live game of the season and I have enough trouble recognising September’s signings, never mind any from January, and have yet to work out what system we use and where different players slot in, assuming we have one.

A couple of weeks ago Pete had jokingly asked if I still wanted my Everton ticket and I’d replied that I did and that we’d win 2-0, a prediction which I repeated in the “guess the score” last week. And, having seen some weird results at Goodison in the last few years I really did believe we could do it.

It took about four minutes for me to realise I was wrong, and there’d be no mug for me anytime soon. 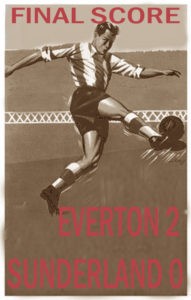 It wasn’t so much that we were inept, it was just that it quickly became obvious we weren’t good enough, not to win 2-0, and probably not even to draw.  By the time those four minutes were up we had conceded three corners, and not all while under heavy pressure. Everton weren’t particularly good by their standards – this turned out to be the kind of match that you wouldn’t want someone to choose as their first – but they were more than adequate and handled what little we could throw at them without losing their poise or appearing uncomfortable.  They  had a game plan, which was basically to go down the wings and put the ball in, and they had people who could carry it out.  Did we have a game plan? I couldn’t discern one, unless it was “hope Jermain Defoe can score without support”. That difference was enough to ensure victory for Everton.

A victory which was won, I would say, in midfield. We weren’t too bad across the back. John O’Shea might not be the fastest but he has guts, and experience, and he can organise a back line, especially when it contains Kone – solid against Lukaku – and Oviedo, who inspires more confidence than Patrick ever did. It also contains Billy Jones, however. I’ve seen him have solid games but he didn’t quite have one yesterday. Nothing too disastrous, but things he tried didn’t come off and and almost any Everton player who took him on caused problems.

Similar things could be said of Januzaj, who for a while seemed to be getting the measure of Leighton Baines (someone I appreciate more every time I see him), and Borini. Neither did enough to magic up chances for Defoe, neither looked capable of turning Everton’s players inside out. There were some periods when the game passed them by and others when Everton pinned them back in our half and they couldn’t break out.

Which brings me back to midfield. Individually Ndong – improving but still not perfect – and Gibson covered a lot of ground, and made a lot of interceptions. But they have yet to gel and they have yet to prove themselves when it comes to providing the killer pass forward. That was lacking and it was one of the big differences between ourselves and Everton, who had  Schneiderlin to show us how it’s done. He, with great support from his teammates, kept possession, moved the ball forward and forced us onto the back foot. When they couldn’t get the ball out wide he came at us through the middle. He seemed to grow in size as the game progressed while our players diminished.

Gibson and Ndong weren’t helped by Larsson. I used to be a huge fan of Seb. Note the phrase “used to be”. I think his time has come if yesterday’s game was anything to go by. Misplaced passes, daft decisions. He set Everton’s forwards away more than he did ours.

Yet we did hold Everton off, sometimes desperately, for most of the first half and we looked like we could make it to half time until a lovely crossfield ball (from that Schneiderlin?) took Jones out of the picture and allowed Coleman to play the ball across the box where Gueye’s late run and near perfect shot left Pickford helpless. It could have got worse as the ball came back off the post a couple of minutes later but 1-0 it was as the half-time whistle went.

There was an improvement in the second half. We began to fight more for the ball and we pushed up more. It almost paid off, too. Januzaj and Borini combined and got the ball to Defoe who made space and smacked in a shot which came down off the bar, landed inches in front of the post and then bounced too awkwardly for an incoming Seb Larsson to redeem himself with a goal.

At that point we had impetus and I began to hope, but our manager broke the tempo with a couple of substitutions that stopped us taking a corner. Bad timing. We ended up pinging the ball about a bit, then allowing a clearance that played in Lukaku, who ran from the halfway line to the six yard box, shrugging off the attention of Oviedo (I think, it’s not easy when you’ve never seen half the team before) as he went, and put it beyond Pickford.

And that was that. Different results elsewhere could have made the day worse, I suppose, but this just wasn’t good enough for a Premiership club and we won’t survive if we don’t improve. Above all, we need to do something about midfield. Pickford had a good game, he made some good saves; O’Shea still has class, Defoe is class. Kone appears to be back and Ndong is improving, Oviedo and Gibson will be fine given game time.  But that’s not enough, we lack bite, tenacity, creativity, all those things that come from a well-tuned midfield.

It’s tempting to blame our woes on injury and I’m sure we’d be at least 10 points better off if we hadn’t lost Catts, the Hoff, Roadrunner and Victor Anichebe, but as things stand we are going down. We cannot compete, especially in midfield, and the Premier League is one unforgiving competition.

4 thoughts on “Sixer’s stand-in’s Soapbox: Everton do enough to guarantee the points”