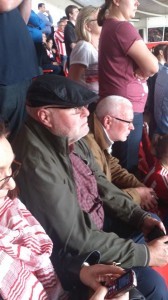 Malcolm Dawson writes………..if you believe the official figures, there were over 40,000 world weary souls at the Stadium of Light yesterday but that statistic includes all season card holders and by the number of pink seats visible, a good number of those had opted for another way of spending their Saturday.

Pete Sixsmith wasn’t one of them and was there as usual to witness a game highlighted by slack marking and missed opportunities from the home side. What made this different to so many others was that the boys in red and white actually found the net twice and it wasn’t Jermain Defoe who did so.

Pete’s report came in early this week as he is off to witness the delights of Ashton in Makerfield and other grounds on the North West Counties “Easter Ground Hop” itinerary, relaxed in the knowledge that next weekend he won’t have to file his copy to M Salut, what with Arsenal playing at Wembley and that. 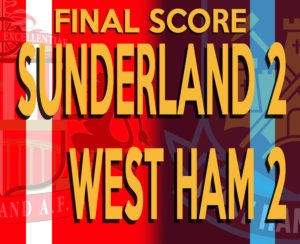 I wonder what David Moyes is thinking now? Is there some satisfaction about breaking the run of defeats and ending the goal drought or is there the disappointment of failing to win and putting pressure on Cities Hull and Swansea, both of whom were well beaten away from home?

Is he satisfied with an improved performance from his players or is he seething about basic errors which cost us two goals as well as us missing at least one good chance to win the game?

Is he sanguine about the fair number of supporters who gave him the bird whenever he emerged from the relative security of the dug out or has he taken it to heart and is perhaps contemplating whether he has a future on Wearside?

One thing is for sure, the metaphorical nails are being banged into the metaphorical coffin and to mix metaphors, we are sliding through that trapdoor which will see us locking horns with The Bees from Brentford, The Robins from Bristol City and The Wolves from Wolverhampton. The Championship is awash with animal teams – alas, almost certainly no Magpies.

This was better in parts. There was a bit more verve about our play. From the kick off the recalled Wahbi Khazri ran with the ball and attacked the opposition – and we almost fashioned a chance. Up went the ball to the other end and your friend and mine (and I mean that most sincerely, folks) Mr Andre Marriner, booked Lee Cattermole for a collision with Andre Ayew. That meant our midfield maestro had to negotiate a possible 89 minutes without incurring the further wrath of a man who has sent him off twice in the past.

Not surprisingly it stilted Cattermole’s game, although it did allow Gibson and Ndong to play a more prominent role. Gibson had his best game for Sunderland, playing just in front of the back four and one missed shot apart, making a generally positive contribution. It was nice to see a midfielder making the odd telling pass and being able to control the ball. Ndong was busy and effective and is beginning to look a decent acquisition. Whether he can produce the goods on a wet and windy night at Barnsley is still to be discovered but I was impressed with his athleticism and his ability to pop up in unexpected places. Unfortunately, one of those was on the end of a lovely pass from Khazri which the Gabon international managed to blast into the North Stand.

It was one of a trio of errors which cost us the win. The other two came in our box where Denayer failed to spot Ayew and he scored easily after Carroll had mis-kicked a cross from Byram. O’Shea pointed out to his central defensive colleague that he could have done better than he did. Denayer seemed to accept it. The other howler came a minute into the second half when a cross from Snodgrass was headed in by James Collins as our defence stood and watched him. Cue every one looking at each other and walking back to the centre circle sheepishly. Bah!!

To balance that, our two goals were also down to poor defending. The first equaliser came directly from a Khazri corner as Anichebe stopped the keeper from getting there first. Could have been an obstruction but really, Randolph should have done a lot better. For Borini’s goal, Randolph came a long way for a hopeful punt into the box and dropped the ball allowing Don Fabio to strike it cleanly into the net to salvage a deserved point.

It is too late to look for positives. Failure to win this game makes the task of staying up much harder but the team did show some fighting spirit and the team selection was better than it has been recently. Out went Kone who looks about as interested in being at Sunderland as George Osborne does at being a backbench MP. Out went Borini, a huge disappointment this season and in came Khazri. Out went Rodwell to be replaced by Gibson. Both of those changes were positive and made one wonder why both players had not been involved earlier.

Khazri looked the player he was 12 months ago and added pace and an ability to do something unexpected. It didn’t always come off but it was better than watching Januzaj ducking tackles (he came on and ducked one straight away) or Borini giving the ball away. But why was Anichebe played wide? We needed a win yet we still only played one man up front. In the past, Defoe has tortured Jose Fonte yet here, the far more robust Collins picked up our major threat. Had Anichebe been in the middle, Collins would have had to take him and that would have allowed Defoe to pile on the misery for the former Southampton man. But what do I know?

As for the manager, he is not popular. The boos that greeted him when he popped out of the dugout were extensive enough to worry him. The crowd have not yet turned but they may. It will be interesting to see what kind of reception he gets at Middlesbrough a week on Wednesday from the travelling support. He strikes me as a man who will only change when he has to. I wonder how he felt when Khazri equalised and then went on to be our best player. Was Moyes genuinely pleased or did he grit his teeth and adopt a fixed smile? I hope Vikki Sparks wasn’t there to interrogate him post-match.

As for West Ham, they flattered to deceive as they usually do. I thought Snodgrass was particularly disappointing and looked poor value for money. I didn’t rate the keeper either and they may well be looking for a new coach in the summer. Bilic has probably done all he can with them. At least we will be spared a visit to their awful stadium – and probably for a few years.

We have another weekend off because of Arsenal’s involvement in the FA Cup semi-finals. Their fans will be sharpening the knives ready to plunge them into Arsene should Manchester City beat them. The pampered denizens of Highbury and Islington should try being Sunderland supporters; now that would test them.

4 thoughts on “Sixer’s West Ham Soapbox: too late for positives”

Next Post
David Moyes: steering his Sunderland ship on to the rocks?